The definition of a brand that I see used most often is Paul Feldwick’s, the eminent sage of DDB:

“A brand is simply a collection of perceptions in the mind of the consumer.”

This is great because it constantly reminds us that, as Mr. Bullmore has pointed out:

Brands... are made and owned by people... by the public... by consumers.

This definition is part of the orthodoxy of planning and reflects the planner’s classic role as the voice of the consumer. It also led to a conceptual rift between two kinds of brand equity – that which exists in someone’s head and that which can exist on balance sheets as a form of intangible asset: almost all text books make this division very clearly.

I don’t think this definition is entirely adequate. And I think, with a slight reformulation, we might able to also begin to resolve the division between brands in our heads and brands that have a dollar value to accountants.

In the next few lines following the above quote in the article Posh Spice and Persil [a must read], Bullmore points out:

The image of a brand is a subjective thing. No two people, however similar, hold precisely the same view of the same brand.

And of course this is absolutely true. And yet it’s also not true. My image of a particular brand will be subjective – as my image of a chair is – and yet it will exist in relation to an understanding of the collective perception of the brand.

Wittgenstien argued that there is no such thing as a private language: a language unintelligible to anyone but its originating user is impossible – it couldn’t function as a communication medium for a start but also there would be no way for a user to assign meanings to its putative signs.

This is what allows brands to be used in defining, or constructing, an identity and all those others things that brands can do up the top of Maslow’s hierarchy. If all that mattered is what I personally thought about the brand, it would be unable to perform any social functions at all.

So, let’s put forward a reformulation:

A brand is a collective perception in the minds of consumers.

This is why I think Mark’s work on the Herd could be so important in understanding the nature of the relationships between brands and people, as well as how people behave.

But how does this help resolve the division between brands in the head and brands on the balance sheet? Because by making it a collective perception, we can turn a brand from an opinion into a [type of] fact.

Here I’m going to steal heavily from John Searle, who wrote about the construction of social reality. In essence, he argues that, collectively, subjective opinions can create epistemically objective reality.

This seems counter intuitive – how can everyone thinking something make it real?

But in fact we do it all the time. The best example is money. Money is only money because we all agree that it is. Its status as money is not in any way derived from the physical qualities of the coin or note and it’s no longer linked to a gold standard. In fact, most money nowadays exists as magnetic impressions on hard drives somewhere but that doesn’t matter – as long as it functions as money, as long as it can be used to pay debts – it is money. Objectively.

If I go into a shop and try and buy something with some cash, my belief in its value is no longer required – it simply is money. This also can be seen to apply to government, property, parties, wars – all these things only exist as the things they are because we think about them in a certain way and yet they do exist.

Similarly, I would argue that a brand is a form of socially constructed reality that has attained an objective reality, which is why it can have a cash value that is dependent on the totality of perceptions held about it. 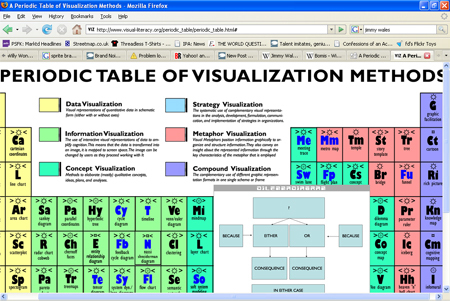 My mate Ant just sent me a link to the Periodic Table of Visualisation Methods. [There's a mirror here too just in case.]

I've rolled over the dilemma diagram in the pic above - each roll over pops out an example. There are classics like Porter's Five Forces model of competition and Gartner's Hype Cycle as well as things like Heaven and Hell Diagrams and Turkey Box Plots [no idea]. 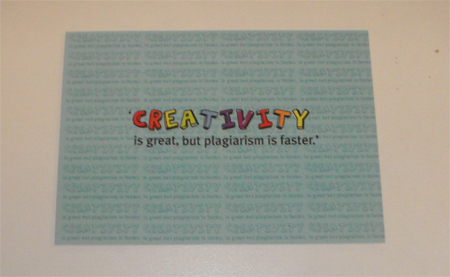 Most people make them. Even if you don't, you are aware that you are NOT making them.

Magazines exhort us to change our lives, Boots wants us to Change One Thing.

Why do we do it? Why do we resolve to change our ways? Especially when we know the vast majority of us will fail to stick to these self imposed mandates.

Apparently the Romans started it all, with their two faced mythical king Janus, who got his own month, despite not being real. He looked back to the past and forward to the future and became the symbol for resolutions.

Is it some cultural memory of the pagan festivals of rebirth that demarked the beginning of spring?

I think it's something to do with the feeling that we are in control. Things that you can change, you control. If you can control the things in your life, you are choosing how you live.

Even if you ended up failing in your resolutions, you still could have changed.

So, maybe we make resolutions to validate all the things in our life that we don't resolve to change, all those things we choose to keep doing.

Or maybe we got drunk all December and feel rotten.