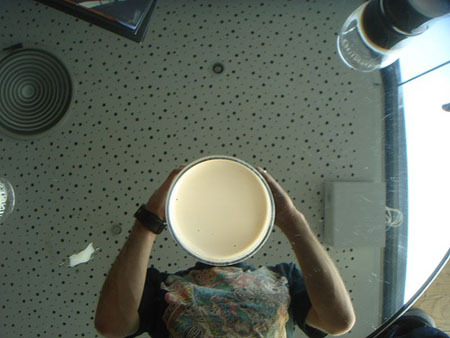 The very first Pub Evening is tonight at the Commercial Tavern in Shoreditch.

A few people have said they are going to come, which is exciting.

I'm still going to take a book though, just in case. 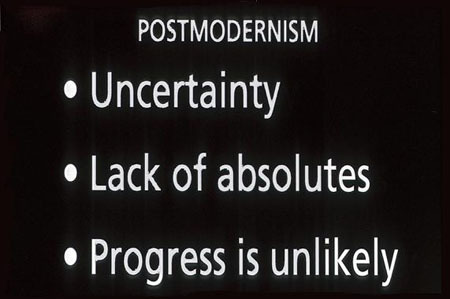 The idea that talent imitates and genius steals, usually, refers back to a postmodern view of culture. It posits culture as a self conscious stock house of signs. Since meaning is impossible to definitively assign, texts pull established signifiers into service as referrents:

Thanks to the processes which led to postmodernism, all culture is a buffet table. It is not so much what the chef prepares but what the diner puts together as his or her meal that counts; appropriation is an act of creativity. Because everything is in quotes in postmodernism, the allusion may be the most important literary device of our age. [From Using Hip Hop to Introduce Allusion]

This use of allusion allows for layered meanings to be constructed, as in the addiditve compression aspect of transmedia planning that Jason wrote about here.  In the Burger King ad, there are layers and layers of allusion that help construct and deepen the 'meaning' of the ad.

The idea that culture is simply an aggregation of sources is not new:

Most people are other people. Their thoughts are someone else's opinions, their lives a mimicry, their passions a quotation.

But postmodern expression is also characterised by an ironic self awareness and use of representation - a kind of nudge and a wink to the reader or viewer -  that expresses the elusiveness of true meanings.

I think advertising moved into a postmodern mode a long time ago. But it has become more and more self conscious in its self consiousness for the same reasons that brought about postmodernism in the first place, as detailed in the picture above: uncertainty, lack of absolutes, a feeling that progress is unlikely.

The rules that advertising formalised since its inception are slowly breaking down and the modernist certainty of beneficient progress has given way to an industry typified by questions concerning what we should be doing, whether advertising has validity and ads that are either ashamed to be ads [see any beautiful piece of film ad or branded content or product placement] or ads that overcome their shame by being grossly self aware ads [see the bizarre Barry Scott shouting about Cillit Bang.]

So what happens next?

Postmodernism, like modernism and romanticism before it, fetishised [ie placed supreme importance on] the author [TIGS Note - for our purposes it will help to read author as brand], even when the author chose to indict or pretended to abolish him or herself. But the culture we have now fetishises the recipient of the text to the degree that they become a partial or whole author of it.

This makes sense of the whole move towards the consumer being in control. In postmodern communication the brand reappropriates signs but still remains the central control and focus of the text.

Whereas in post postmodern communication - or pseudo-modern comms - the consumer is an integral part of the creation of the text:

Its successor, which I will call pseudo-modernism, makes the individual’s action the necessary condition of the cultural product. Pseudo-modernism includes all television or radio programmes or parts of programmes, all ‘texts’, whose content and dynamics are invented or directed by the participating viewer or listener.

The shift to this pseudo-modern mode of communication has been facilitated by emerging communication technologies that allows for traditional media to become interactive.  Thus its ultimate expression is online:

The pseudo-modern cultural phenomenon par excellence is the internet. Its central act is that of the individual clicking on his/her mouse to move through pages in a way which cannot be duplicated, inventing a pathway through cultural products which has never existed before and never will again. This is a far more intense engagement with the cultural process than anything literature can offer, and gives the undeniable sense (or illusion) of the individual controlling, managing, running, making up his/her involvement with the cultural product.

Which is why pseudo-modern communications tend to lean towards co-creation, interaction, engagement and that - consumers are intergral to the construction of the texts - and this reaches far beyond the sudden explosion of UGC open source advertising campaigns.

Because they are and it is.

I am a Passenger 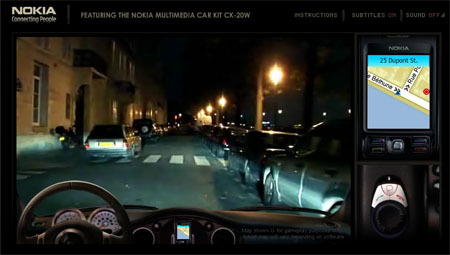 Nokia have launched their multimedia car kit, the emotively named CK-20W [what is it with technology companies and serial numbers? Throw me a brand here!], with an interactive film / game  called The Passenger.

Rather than talking about the product specs the game demonstrates what it actually does and gets you to sample the experience.

Fusing live video and interactivity makes for a heavy app - this is definitely a broadband experience [does anyone actually still use dial-up? Just had a weird nostalgia flash for a modem connection song] - but it looks great and brings the product to life in a suitably digital way.

Microsoft are building this sort of functionality into the new Windows Live Local, part of Virtual Earth, to give you a streetside view to aid navigation - it's not there yet but will be a step forward in their pursuit of Google in the local race.

Although it remains to be seen if they will open the API and thus allow the mash ups that have driven Google Earth / Maps. Imagine patching your own content into the streets. Can Microsoft learn to let go?

My mate Nick just sent me in the direction of this excellent animated movie.

To steal his point - imagine if we could present our ideas like this.

Looks like I'm going to have to learn flash.

Bottom of the Pops 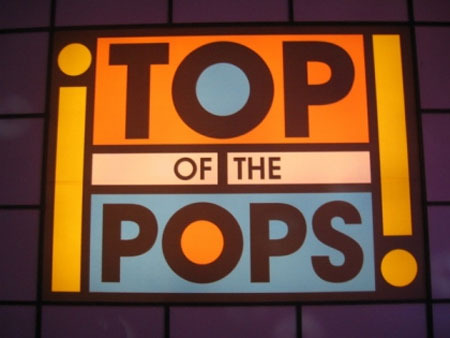 Scamp has revived the Top Ad Blogs list that Beyond Madison Avenue used to do.

I sneak in at number 10 on the UK list, which is neat. At least until Paul becomes a planner and knocks me off the bottom.

Do you remember when Nirvana were on Top of the Pops and they refused to mime properly?  That was awesome. You can watch it here and recapture, for a brief moment, the awkward, glorious rebelliousness you felt when you used to Smell like Teen Spirit.

Right then. Let's do it. Pub evenings are go. As previously mentioned, a bit like coffee mornings except after work, in a pub, with booze.  Or juice I suppose. Although that's not really in keeping with the spirit of the event.

Next Wednesday, February 28th, I'll be in the Commercial Tavern, on Commercial St. E1. from 7pm. Possibly upstairs, depends how busy it is.

Apparently the Elephant Man used to live there.

Come, drink and be merry.  If you want. It'll be fun. Promise.

I'll take a book with me just in case. 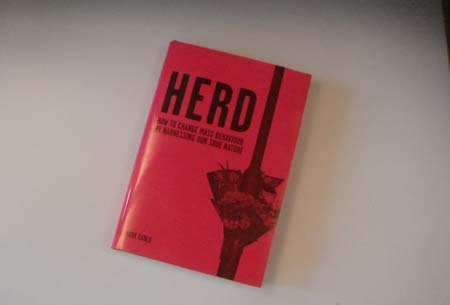 Mark's book finally went on sale yesterday. You can get it from Amazon. Obviously.

It's called Herd: How to change mass behaviour by harnessing our true nature.

Mark's written a rather touching post about the launch over on Herd, where he talks about Ubuntu. [You'll have to go read it if you want to know what that means.]

I'll let you know what I think once I've read it but having spoken to Mark, seen him present ideas from the book and read the groundbreaking paper it has grown from, it's certain to be good.

As Russell points out in his foreword, its got some big theories that may require you to completely rethink how we think how stuff works but it also has pictures and jokes, which sounds very promising.

PSFK Conference: Trends and that 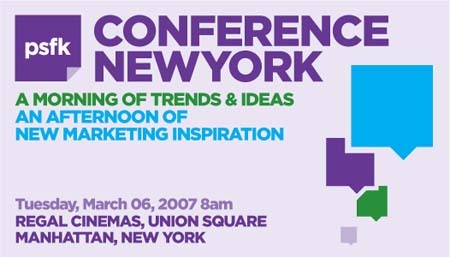 When I was over in New York  I had the pleasure of chatting with Piers a couple of times. Whilst it was great to say hi, I wish I had been going over in a couple of weeks time so I could have gone to this.   [Is that the conditional future perfect? I'm not really sure.]

Here you can hear not just from Piers, [homonym / rhyme and pararhyme? Ok I'll stop this now. Sorry.] who is a lens for all things trend, but a host of fantastic speakers [bloggers?] including Grant and the always hilarious George Parker. History is an oft neglected part of an education in communication. I don't know how many times I've heard grown ups complain that no one has heard of Lemon today. [If you haven't heard of Lemon, go and find out quick and then pretend you had.]

Just like they told you at school, those who don't remember the past are doomed to repeat it. No wait, hang on, Lemon was part of the greatest campaign of the last century, masterminded by one of advertising's greatest thinkers.  I would love to repeat it.

Ok, then, well those who control the past control the future. Except the past is a foreign country; they do things differently there, so maybe they don't. Maybe they only control other markets.

Ok, well, let's say that history is the only laboratory we have in which to test the consequences of thought. Except that Henry Ford said that history was more or less bunk, so the results may be unreliable.

"Educating you on our planet's most powerful products", the history of branding site carries succinct biographies of many of the world's biggest brands, which are probably worth knowing if you work with brands.

Although that isn't actually the history of branding per se.

Well this is very nice - I've been nominated for Post of the Month over on Russell's blog for a piece I wrote on the Dark Side of Brands. The piece steals ideas from my mates David and Adam, so if we win, we all win together. Open source posting and that. Collaborative creativity.

Go and have a look at the all the nominees and then please vote with a click.