Oops My Strategy is Showing 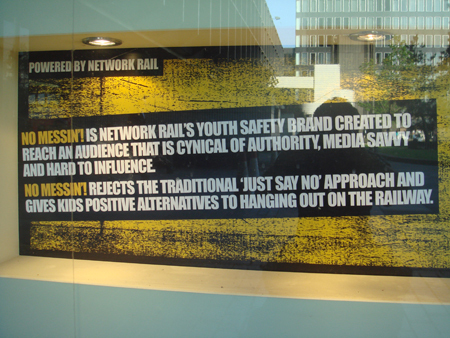 NoMessin is a Network Rail youth safety initiative to try and stop kids playing on railway tracks by suggesting other things they can do. There are 11 million incidences of trespass onto railway lines by under 16s every year and, on average, 60 deaths and many more injuries.

So this is definitely a good thing and the roadshow that's out there looking to teach kids skills they might be interested in - skateboarding, DJing etc - and give them reasons not to be on the tracks is also a good thing.

And whilst I agree with Richard that your strategy should be showing, I suspect in this case that it might possibly negate the campaign's appeal to the young people it wants to reach by stating it so directly... 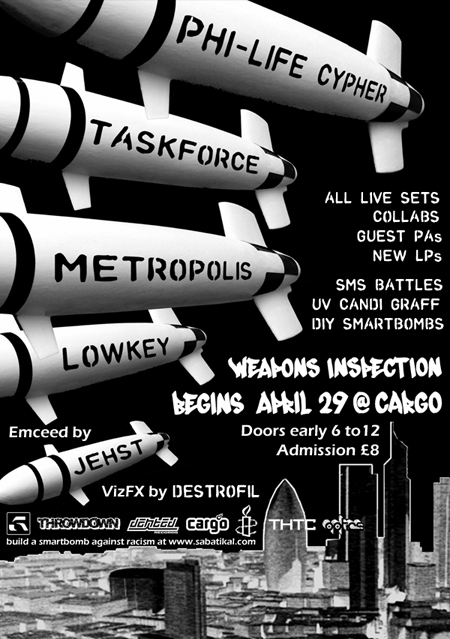 My mate Aran is putting on this event at Cargo on Sunday. Using the forces of Hip Hop to engage the young with world events and human rights issues under the banner SABATIKAL, in association with Amnesty International.

There will be a host of UK's HipHop royalty supporting the cause, including the incredible Phi-Life Cypher, and some interesting experiential elements like UV grafitti and SMS HipHop battles.

On the website you can send protest smart bombs about human rights issues that will be displayed on the night and online. This event is the launch of the campaign which will extend into games, websites, online music and blogs, connecting young people to human rights issues around the world in relevant ways.

It's for a good cause and worth supporting - it will also rock the joint.

A quick reminder about tonight's BeerSphere in association with the Wildfire Conference and  generously sponsored by Anomaly - full details are here. 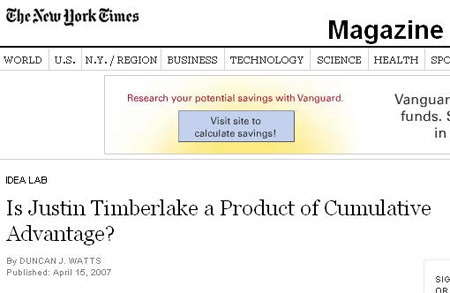 My mate Dave [yes I know- it sounds like Ali G] sent me this great NYTimes article about social influence on the success of cultural products.

Once again substantiating Herd thinking [there you go Mark ;-p], a professor at Columbia and the author of Six Degrees: The Science of a Connected Age, shows that not only is social influence more important than personal preference when deciding what you like, as counterintuitive as that might sound, but there is an additional factor that makes predicting what will be a hit practically impossible:

The reason is that when people tend to like what other people like, differences in popularity are subject to what is called “cumulative advantage,” or the “rich get richer” effect. This means that if one object happens to be slightly more popular than another at just the right point, it will tend to become more popular still. As a result, even tiny, random fluctuations can blow up, generating potentially enormous long-run differences among even indistinguishable competitors — a phenomenon that is similar in some ways to the famous “butterfly effect” from chaos theory.

Which is why film studies / record companies find it so hard to predict what will be a blockbuster, which led to a venture capital model of cultural production, where studios / labels invest in 10 things on the assumption that 9 will lose money but 1 will make enough to recoup the losses.

Should we want to pull out a useful thought for marketers, it would probably be that it isn't what is actually popular that matters [despite the 1 million housewives can't be wrong school of thought] - rather:

Which suggests how style bibles like Dazed can be used to influence cultural dissemination and also the value of decent online seeding - the web is the only place where you can actually see what the masses claim to like. 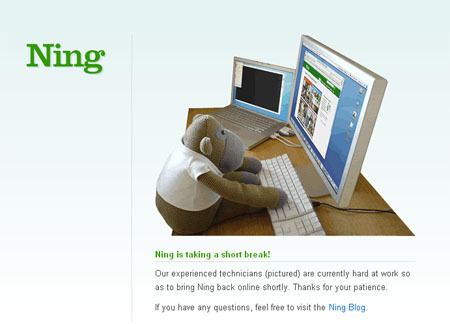 No, Al, we need better Ning.

Ning went down for a bit a couple of days ago, taking the PlannerSphere - AccountPlan.ning down with it.

It was back up pretty quickly [Marc Andreessen knows what he's doing] so you might have missed their Oops page.

Whilst it's become something of a web 2.0 characteristic to have funny / charming down pages, Ning seems to have recruited a bona fide 2 time brand icon to host theirs....

On a related note, the PlannerSphere Ning hit 200 members today! Thanks everyone for getting involved. 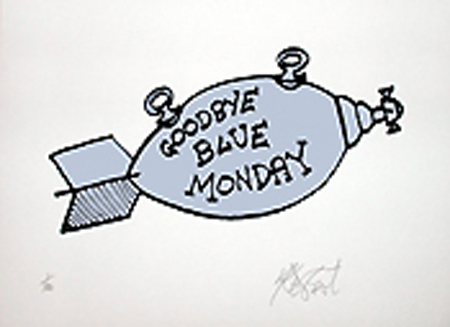 I can't believe I've only just heard that Kurt Vonnegut died last week. One of the greatest writers of all time and at heart a true cynic, cynical in the way that desperately understands that we should all be better than we are.

“Hello, babies. Welcome to Earth. It’s hot in the summer and cold in the winter. It’s round and wet and crowded. At the outside, babies, you’ve got about a hundred years here. There’s only one rule that I know of, babies — ‘God damn it, you’ve got to be kind.’

If you've never read any of his books, go and read Breakfast of Champions immediately. And then read Slaugherhouse-Five. And then Cat's Cradle. And then everything else he ever put to paper and realise what we have lost that there will be no more.

BeerSphere is back, much sooner than anticipated, due to the fates conspiring in favour of it.

In this case, the fates have made themselves manifest in the form of the Wildfire Conference and the lovely people from Anomaly NYC.

The Wildfire Conference, brought to you by the fantastic Contagious Magazine and Leo Burnett, looks great and is on next week, on the 24th and 25th of April, at the Truman Brewery. If you can get a ticket I would heartily recommend going.

But if you can't, why not come to BeerSphere on the Monday night before it kicks off - 23rd April - and meet some of the speakers over a pint or two?

Not only has the radiant Jess at Contagious invited all the conference speakers to join us at this very special BeerSphere, but the lads from Anomaly have kindly offered to pay for the drinks! And maybe even some crisps. Solely for the opportunity to meet some of the London PlannerSphere. I hope you all feel special.

Thanks in advance to Johnny and Carl from Anomaly for supporting the PlannerSphere's desire to get drunk in excellent company.

As usual, BeerSphere will be held at the Commercial Tavern, on Commercial St, E1, from 6.30pm ish. Unusually, we'll have international guests in attendance and free drinks. And if the sun is shining too, well, what more could you ask for?

I've reserved the big table upstairs - see you there.

A Map is Not the World 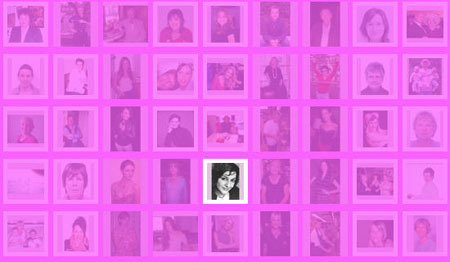 I've always had a problem with segmentation. I think it's for the same reason that I don't believe in horoscopes - since I'm a gemini [could you tell?] and the predictions for that sign apply to all geminis, I would have to infer that 1/12 of all the people in the world are, basically, the same as me in temperament and that the vagaries of fate will be treating us in the same way.

This is clearly rubbish, I would tell myself, the world is much more complex than that and, anyway, I'm an INDIVIDUAL, as unique as a snowflake.

Tyler Durden disabuses his alter ego of this notion in Fight Club:

You are not a beautiful or unique snowflake. You are the same decaying organic matter as everything else.

But other, less aggressive, facilitators of enlightenment have made much the same point. We think of ourselves as individuals because we look for the differences. We ignore the similarities, which are far, far greater than the differences.

To put it simply, every single person in the world is more alike than we all are to a tree or a goat or anything else that isn't a person. Taken from a macro viewpoint, it's all just one face in many variations.

That said, I still have some problems with segmentation. Too often segments lapse into stereotypes and neglect to emphasise the fact that we are talking about average behaviours, not absolute behaviours.

My mate Gareth sent me this leaked segmentation report from Phones4U and as he pointed out, as well as being hilarious and slightly offensive, it also implicitly suggests that every iPod Babe is into "Fuck Buddy Sex".

My other problem with segmentation like this is that it aggregates individual tendencies into groups. As Critical Mass points out, this simply isn't a realistic way to model behaviour:

"Individual tendencies do not necessarily extrapolate to group behaviour"

Interaction between agents changes the game completely, which is why scientists developed agent based models to examine the emergent properties of large groups of individuals interacting.

So even if all iPod Babes are exactly the same, all the time, which they aren't, throw a few of them together and all bets are off.

This completely disrupts the notion of Homo Economicus - the rational man [or babe] that makes economic decisions designed to maximise personal utility. Behavioural economics suggests that purchase decisions are influenced by group dynamics and recent experiments have shown this to be true in controlled conditions.

So where does that leave the iPod Babes? Understanding that different people have different drivers and motivators is undoubtedly a sensible thing for a marketer to explore, but there is infinite variation within the average and interaction within the groups.

Segmentation is a map of the populace but, like any map, it's important not mistake it for the world. 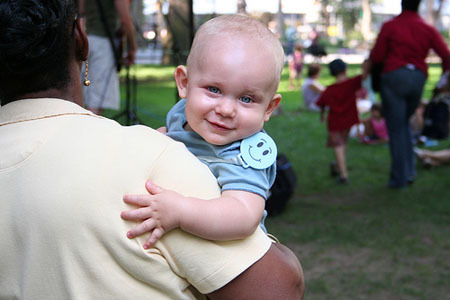 Right now, you are experiencing the same level of mental stimulation you would experience if I had just given you £16,000, according to some research funded by HP.

Whilst this kind of comparison makes no sense to me at all [and to my mind demonstrates just how little we can really understand from seeing blips on the fMRI], it's still a pleasant reminder of the power of positive interaction and the fact that seeing other people happy will make you happy. Probably something to do with mirror neurons and almost certainly a herd idea.

Additionally, as Mark mentions in Herd, people can always see through fake smiles. So this leads to the question - is it enough to show people smiling babies, or do you actually want to make people smile? Do the smiles in ads seem real?

As the article points out, the high street retail environment has a huge potential advantage over online retail in this respect - brands have the opportunities to smile at their customers, face to face.

Of course, since we can see through fakes, this requires having employees who are actually happy.

Regardless, it's certainly worth remembering that your employees are part of the herd too.

[Incidentally, it's also the case that if you force yourself to smile properly, this will in turn make you feel happier - the physical act is thought to trigger emotional response.]

[Story found via the excellent Dorset Cereals screensaver, which was itself found via Richard.] 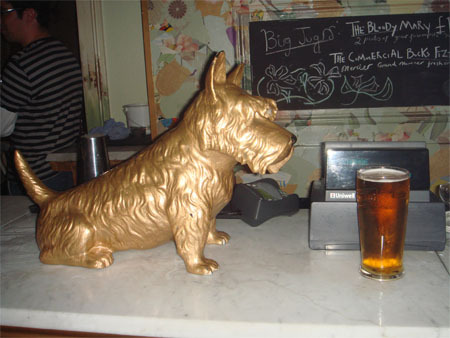 BeerSphere II was great fun - many thanks to everyone for coming!

We saw Ant, Iain, Anna, Sarah, Will, Neil, Corentin, David, Fran, Stef, James and other people I've no doubt forgotten because of too much sphere.

A couple of people mentioned that an email reminder thing might be useful. I'll try and sort one out next week - right now it's sunny so I'm going outside.