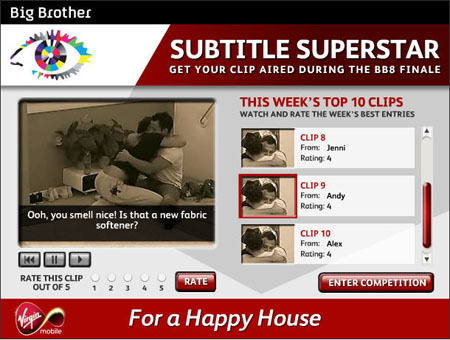 Has anyone been watching Big Brother this year? It seems to have completely passed me by, especially compared to the worldwide echo that GoodyGate generated.

That said, I was aware of the idents because my mate Simon said they were good so I had a look. Using clips from foreign Big Brothers and then overdubbing them with fake subtitles is nicely recombinant and is both a sly dig at our island nation's jingoism and a comment on the media furore around the previous series.

In the spirit of consumer creativity, and perhaps as a driver for audience numbers, they are running a competition to write the ident subtitles for the final. Enter and then tune in to see if you've won.

Seeing and hearing yourself without the complex cognitive filters you have in place that make up your entirely distorted self image is never very pleasant. It's the shock of recognition, of seeing your face the right way round, of hearing your voice they way other people do, and thinking: Oh dear, that's me.

So when Iain let me know that the video interviews we did when we were over in Romania, speaking at the Idea Forum, had gone live, I experienced a slight shudder.

But fortunately the nice people from IQ Ads have edited my vacuous ramblings into something that gives the illusion of sense, and made the video overall much more interesting by focusing on what Iain said.

Iain, we should start Geeky Gay Love Sitcom, - we can do it like Where are the Joneses - who wants to write the first episode? It would be like a cross between My Two Dads and Gay Robot. That would be awesome.

We live in accelerated times. For the first few millennia of [poorly] recorded history, not much changed. People living in AD4 and kids that grew up in AD1204 lived pretty much the same lives - same agrarian culture, same life expectancy and mostly the same technologies.

Sure there was progress, but it was incremental. Things changed very slowly. Then, suddenly, sometime in the middle of the C19th the Industrial Revolution kicked mankind's technological progress into exponential growth. This slide that Richard got from MB illustrates the shift in the angle of incidence really well, in relation to media fragmentation.

One of the cultural effects of this absurd acceleration we are currently experiencing is what I can only describe as this incredible weight I feel pushing back on us from the future. It's almost as though we are feeling the pressure from the future to catch up, which is what I think contributes to our fascination with what is to come and the existence of futurology as a science, of sorts.

The video above, following in the footsteps of the Googlezon video, portrays a similar single media platform of the future. Like all predictions, it's tainted by the concerns of the present. This presentism amplifies the prosumer and virtual worlds - because that's what we're all thinking about right now. The sheer novelty of the future is always the hardest thing to project precisely because the new new thing isn't an upgrade on some existing technology - it's a step change.

That said, life may imitate art, but so does science. One of the cool things about great science fiction is that it delivers the imagination, and then technology tries to catch up.

A great example of this is Snow Crash.  Without doubt the great novel of the modern Interweb age [successor to Gibson's prophetic Neuromancer], it was written in 1994. Cast your mind back. No Google, no social networks, no Hotmail, the web itself just barely online. 28.8k dial up modems. Take That breaks up.

Reading Snow Crash today, it's hard to get your head round this. In the novel, Stephenson predicts Google Earth, memory cards, Second Life and on and on. It's scary. He also created the term 'avatar' as we use it today in virtual worlds.

[UPDATE: My mate Fred has informed me that the guys who developed Keyhole, which become Google Earth, were inspired by the Earth application in Snow Crash. Detailed in Wired here. Awesome.]

In particular in the science of teleportation, where the stated aim is to replicate [pun regretted] the technology in Star Trek.

Alan Kay, terribly bright chap and one of the fathers of modern computing, summed this up brilliantly:

The best way to predict the future, is to invent it.

Which leaves a role right now for the imaginative: invent the future - someone out there will build it.

A Call to Beer

Drinkers of the sphere unite! You have nothing to lose but your sobriety.

I've set up a BeerSphere Facebook group - so if you want to be notified when BeerSphere is happening and don't check in on TIGS every day [God forbid] then join up and you'll never miss another beer.

The next BeerSphere will be in a couple of weeks - I'll confirm time/place once I've pinned down our next sponsor... 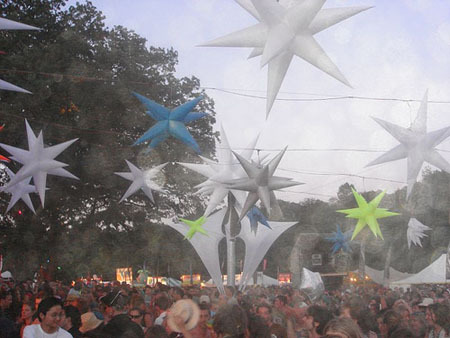 Bravely did I venture to festivals and that, looking to pick up useful insights into human behaviour in the places in between where boundaries begin to dissolve and we discover who we are via the dissolution of ego.

Whilst fruitful in and of themselves, last year didn't provide enough data and thus nothing substantial came of these incursions.

Undaunted, I'm returning once more unto the breach, dear friends, and am off to the Glade Festival.

See you when I'm back next week.

This Time it's Personal 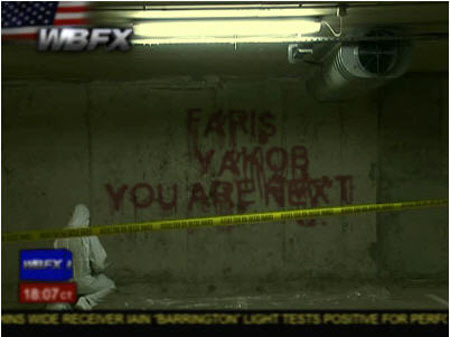 My mate Kate sent me a link to this news report, warning me that a serial killer had chosen me as his next victim.

That sort of thing tends to grab your attention.

The personalised video is a lovely little viral to promote the new FX series Dexter - the story of a charming serial killer.

The viral video you can personalise has been around for a while but I think it's still a great tactic to encourage propagation. Glue's Aveaword for Mini is probably the most famous example [sadly the site has gone down but you can get a presentation about the project here.]

By allowing someone to personalise the content, you give them a sense of ownership and the chance to make it more relevant, making them more likely to spread your message for you.

Which, by a remarkable coincidence, just happens to be the topic of my chapter of the Age of Conversation:

So people are already primed to propagate ideas. However, the mechanisms that created this urge to pass things on are set up to favour our own ideas, not other people’s ideas and certainly not brand ideas, unless people have been given, in some way, ownership of them.

But if you want anymore, you'll have to BUY THE BOOK.

With all proceeds going to Variety, The Children's Charity, this is one of those purchases that will generate a warm, glowing, warming glow inside you and is guaranteed to keep you safe from fictional serial killers. 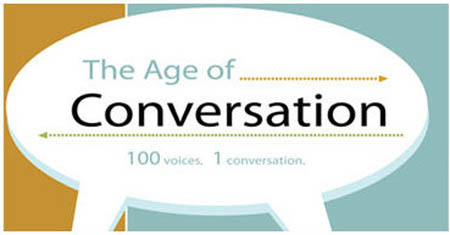 The Age of Conversation goes on sale today.

Details in the previous post but the topline is 100 marketing / communication bloggers have all contributed one chapter to the book, the proceeds from which will all be going to Variety, The Children's Charity.

Lots of interesting thoughts and a good cause - what are you waiting for? Go here to buy your copy. 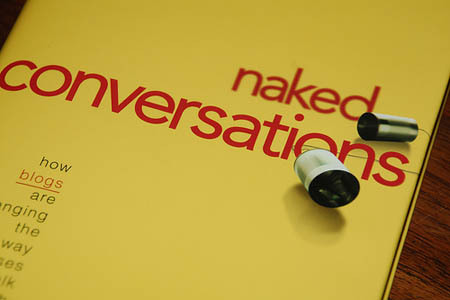 Ever since Cluetrain we've known that markets were conversations, even if we weren't entirely sure exactly what that meant.

As brands caught up with Doc Searls and co. the shift from monologue to dialogue became a staple of planning decks and the shift was welcomed with open arms. This isn't entirely surprising - according to John Peters in his excellent Speaking into the Air [thanks BigShinyThing for the tip on that one], we have culturally fetishised communication as the ultimate therapeutic tool, the only way to heal relationships.

Accessing each other's unknowable interiority without recourse to clumsy tools like language was always seen as the ultimate end goal - whereas Peters argues the beauty of being human is that we are individual and communicate.

Psychoanalysis became the talking cure, using the therapist and your dreams to better communicate, and heal your relationship, with yourself.

Later we discover that interpersonal intercourse, relationship building, is possibly what drove our cognitive evolution and made us sentient and conversation achieved its apotheosis.

The cultural position of conversation is hard to overstate - but it's not all or nothing [is it ever?], as Richard eloquently points out, brand monologue still has a role. Brands need a point of view and a statement of intent.

That said, I'm still very excited to have contributed some small part to the upcoming book The Age of Conversation.

100+ bloggers have contributed a chapter to the book, which is being sold for Variety, the Children's Charity.

It goes on sale next Monday, so I'll point you in the right direction then. I hope you all buy a copy. I certainly will.

"Don't give me songs. Give me something to sing about."

which the geeky among you will recognise as a quote from Buffy the Vampire Slayer.

But don't let that put you off - just check out the other authors and think of the children.

Curiousity is an instinct - an emotional response that motivates exploration and investigation. A lot of animals have this instinct, including cats, which suggests it has evolutionary advantages and that it's a hardwired cognitive mechanism. As such, it's an incredibly potent communication tool because if you can make someone curious, they are naturally inclined to do something, which is shifting behaviour and moving them towards you.

Curiousity is stimulated by making people aware of "manageable gaps in their knowledge". So first of all you have to show people enough of something to get them involved, but leave gaps that people feel the need to fill in themselves.

This is similar to what Jeffre would call being interesting - if you give people all the answers, there's nothing for them to do, no reason for you to stick in their minds.

The 'viral' agency Campfire, who were involved in Audi's Art of Heist, Sega's Beta 7, and the daddy of them all, The Blair Witch Project, says the key to great viral is managing the curiousity gap and point out that if you make the content interesting enough, communities will form around it. Scatter information across channels and communities will form to collect and share it - these are the underlying principles of transmedia properties.

An approach that JJ Abrams has embraced to promote his forthcoming movie.

The trailer above screened without warning in previews of Transformers in the USA. Simply by not really explaining what the film is about, or indeed what it's called, the movie has triggered a flurry of media and consumer attention 6 months before it's due for release.

The trailer became mainstream news on CNBC, heralded as showing a movie studio embrace a new marketing paradigm. There are a bunch of related websites, that give little away, triggering the formation of blogs to pull the clues together.

Whether or not 6 months of anticipation will lead to a backlash when the film comes out, Abrams has none the less turned a film trailer into a news event.

But then perhaps we should expect nothing less from the man that, according to Tom Cruise, was

Although Tom does seem to be building this insight into the creator of Lost primarily from the fact that he has two Js in his name:

Gotta give it up for that J2.