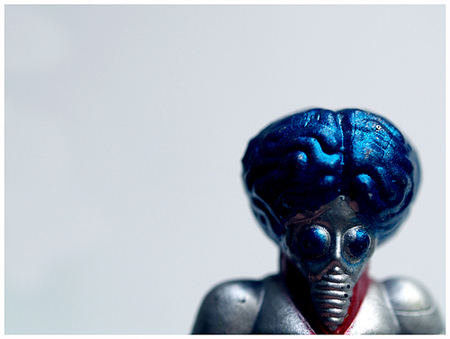 Deep Thought took millions of years to boil down life, the universe and everything into 42 - a wonderful feat of reductionism.

Thinking is one of the great frontiers of modern science. Marvin Minsky, the father of modern AI, proposed his Society of Mind theory in the 80s, which suggests that a mind is not a single thing but rather an emergent property of lots of dumb modules.

The early benchmark of thinking was of course the Turing test - if a program can have a conversation with a person and fools them into thinking it is another person, it should be considered intelligent.

This is essentially the same argument as "If it walks like a duck and quacks like a duck - it's a duck", which on the surface seems sensible but falls down when looking at the concept of consciousness, because it is by definition a subjective property.

The Chinese Room Argument is one attempt to refute this definition of strong AI - just because software can answer questions in Chinese it doesn't mean it can understand Chinese - understanding requires a grasp of both syntax and semantics - software need only grapple with a massive set of symbol strings to answers questions without understanding.

The model of brains that this uses is that of parallel processors, themselves essentially dumb binary logic gates, that, when sufficiently numerous, interconnected and able to dynamically reroute themselves to form fixed pathways, somehow achieve an emergent property we consider consciousness that allows self awareness and the ability to ratiocinate.

Of course, there is another network system made up of billions of interconnected nodes being dynamically routed. Your connected to it right now and its growing in complexity at an exponential rate.

All of which thinking about thinking leads me to the Thinking Blogger Awards meme, which I've been very kindly tagged with again. It suggests I tag five other bloggers that juice my grey matter and then link it all back to the beginning.

So here are five digital neurons to boost your brain:

Tantramar: the thoughts of freelance digital creative and all round excellent bloke Charlie Gower.

Digital Prolixity: passionate bites of brilliance from digital native and my very own brother Ramzi.

From the Mind of Zeus Jones: an agency looking to make marketing a service.

Life moves pretty fast: Amelia heads up digital at VCCP and is worth listening to. Plus it's a quote from Ferris Bueller. 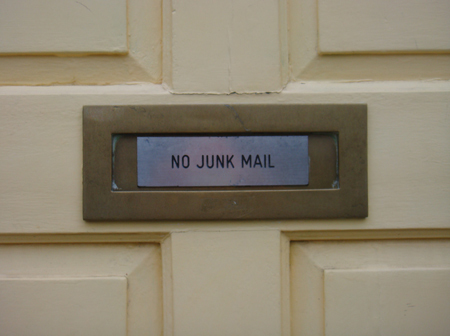 I'm off on holiday for a couple of weeks and probably won't be posting much.

When we return, it will herald the beginning of a new chapter: TIGS will be based in New York from early February. 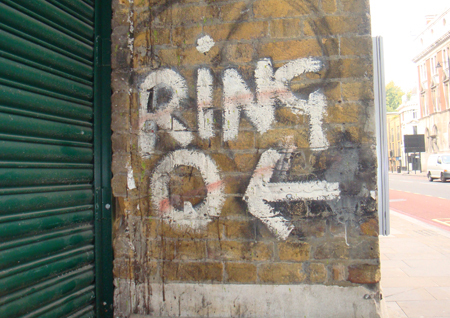 Last year Drew and Gavin pulled together 100+ bloggers to write a book that was sold for charity, raising $10k so far for Variety.

They've got a new one hatching for 08 and are looking for authors and help deciding a topic.

So if you want to blog for good, head over and ping Drew. 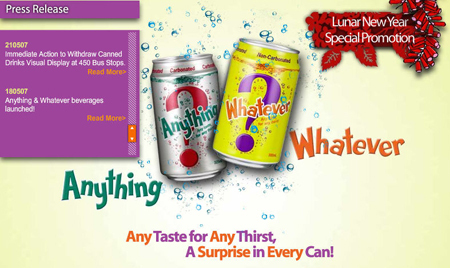 My mate Anne put me on to this soft drink that was launched in Singapore last year.

A "leading golf media" company took the "tough decision" to start making beverages when its managing director had one of those flashes of inspiration that change your life forever:

The concept was developed through the experience my friends and I kept having whenever we were out at a gathering, a coffee shop, or even at home. People kept telling us that they just wanted 'Anything' or 'Whatever' whenever we asked them what they wanted to drink.

My friends and I discussed this and found the concept really interesting. So with the support of my friends, I decided that 'anything' and 'whatever' would be a great idea for a unique Singapore beverage.

And so two new drinks were born. Each variety comes in 6 different flavours but you don't know which one you're getting until you taste it.

According to their website they sold 3.5 million cans in the first month.

It's just wonderful that a brand now exists for people who don't want to make a brand decision.

The counter intuitive insight - that people hate [too much] choice because it makes them makes decisions - lies at the heart of how brands operate: they function like cognitive heuristics - they allow us to not make hundreds of annoying decisions every time we go shopping by tapping into our basic association that anything known is familiar and therefore trusted.

But branding consumer apathy itself is legendary. 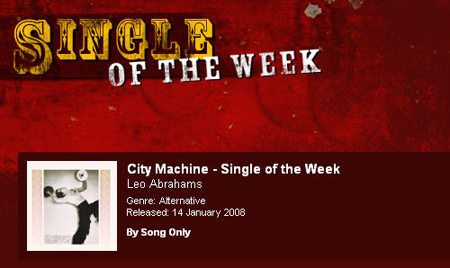 In the history of the music industry, singles very rarely made any money. The cost of production and distribution meant that the unit cost to consumers was way below what it cost the record companies to make them.

Although famous for making poor business decisions, this was not because the record companies were stupid. Rather, they knew that singles were the marketing for album sales. A single that did well in the charts would garner a huge amount of coverage and salience at way below the cost of a traditional advertising campaign and would drive album sales, which is where the  money was.

In the modern world, digital distribution costs come down to almost zero.

This is why my mate Leo is very pleased indeed that iTunes have picked his single City Machine for single of the week, which means they give it away for free for a week.

Leo is a guitar genius and this single features KT Tunstall on vocals. I think it's lovely. But the great thing is that you don't need to take my word for it.

Go and download it from the iTunes store - it's free! And if you like it - buy the album.

May you have an interesting life 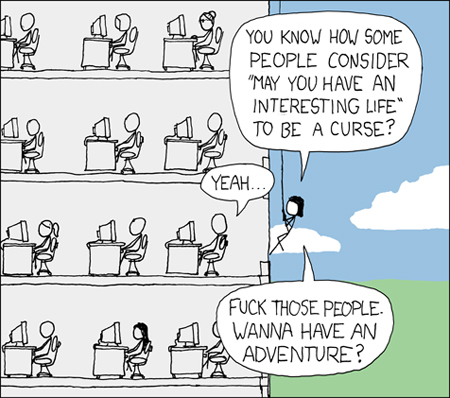 Thanks to Iain I have discovered xkcd.com - a webcomic of romance, sarcasm, math and language - and my Monday has been greatly enriched.

Who's up for an adventure? Over the holidays I read this book called The Game by Neil Strauss. I'd heard a lot about it but avoided it because of the inherent lameness of reading a book about how to pick up women, which is what it is.

Strauss relates the extraordinary story of how he entered the shady subculture of the pickup artist [PUA] - a bunch of [usually] self acknowledged geeks who had conquered their fears of talking to girls by learning routines by rote and then honed those patterns, sharing knowledge about which psychological plays were most effective, until they felt able to walk into any nightclub and go home accompanied.

Strauss transforms himself into Style and ends up living with Courtney Love, sleeping with innumerable women on the way to..well.. I won't ruin it for you.

It's a remarkably entertaining book, full of truly larger than life characters and exploits and it is a TRUE STORY, as he's keen to stress.

It was perhaps inevitable that Lynx would eventually take on the challenge of spreading The Game to the sweaty teenage masses. The new website is rich and deep, full of routines and tips and challenges to help hone your game, content and widgets and mobile apps and so on - as we've come to expect from BBH's Lynx campaigns.

The Game relies on props, routines, gimmicks, to disarm women's natural skepticism of random men that approach them. The site has similar tricks and routines to learn and then try for yourself - the results can be shared with this burgeoning PUA community.

Ultimately, these mechanics give shy wannabe players the confidence to approach women, which is also the product truth underlying the Lynx Effect.

The idea of using cameras as game devices has been around for a while now but as penetration of capture devices reaches 100+ % [do you carry a digital camera and a cameraphone? I seem to] we're inevitably going to see more and more applications for them - something that was neatly evinced this morning by two emails I got back to back.

One was about this new spot [from The Glue Society [who are awesome]] for the Lumix Battle - a new campaign running in Thailand the pits teams of players against each other in photo fights. [More]

And the other concerned rumours of one of the first games being developed for Google's new mobile platform Android: WiFi Army - where players hunt each other across the urban landscape looking to snag sneaky pics on their camera phone, which are then uploaded and checked against a database of players for points. [More]

There are going to be loads more - cameras phones are the first devices to easily enable a visually augmented reality. 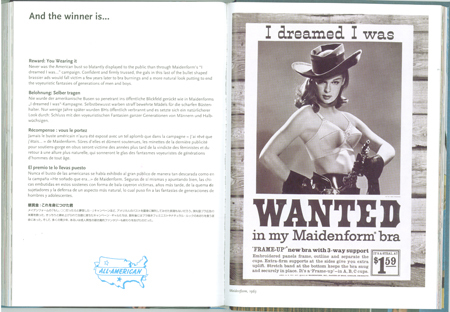 My brother got me this book about 60's American advertising for Christmas [thanks dude!].

There's a lot of interesting stuff in there but the one that jumped out at me, so to speak, was the Maidenform ad.

The Maidenform "I dreamed" campaign ran for 20 years, ending only as the 60s did, featured proud young women dreaming of fantastical situations enabled in some unspecified way by their bras.

It sparked controversy and conversation at the time, just as Wonderbra did with their simplified poster version of the same endlessly fascinating image.

A feminist reading would see it as oppressive and exploitative - women dream of adventures, usually in roles associated with men [cowboy, fireman, toreador]  - whilst a fashion analyst would be more interested in the bullet shaped cones that vanished for decades, only to be re-introduced by Madonna / Gaultier in the 80s.

The whole book reflects the values and aspirations of their times.

And whilst treating the body of advertising of an age as purely reflective is misleading [the civil upheaval of the 60s is rarely evident - 60s advertising feels more like a weird nostalgia for the already idealised 50s] it certainly provides a window into what concerned the dominant discourse of the day.

Advertising operates in the realm of hopes and dreams and myths - these are the levers used to motivate purchase decisions.

The ads of the 60s seem obsessed with space, with women, with sophistication, with domesticity, with really big cars.

I wonder what our ads say about us.

Hyperbubble and The Nature of Cool

Calvin and Hobbes would be required reading if I got to decide these things.

If you've never read any I suggest you go find some. I believe it will make your life richer and we will forever know if we are destined to get on based on whether or not you agree.

Calvin & Hobbes was a long running comic strip that explored the boundaries of knowledge via the lens of a 6 year old boy and his [possibly] imaginary tiger. Named after John Calvin and Thomas Hobbes, the pair wrestle with the big questions whilst playing havoc with reality, their neighbourhood, and their parent's nerves.

Calvin's boundless enthusiasm is tempered by Hobbes' distinctly cynical view of mankind, whom he considers inferior to tigers in every regard.

Their creator, Bill Watterson, was a disillusioned adman who refused to let any of his characters be merchandised [leading to a brisk trade in fake t-shirts forever after], because he  felt that the extensions would detract from his work:

Each product I considered seemed to violate the spirit of the strip, contradict its message, and take me away from the work I loved.

Which could perhaps serve as a consideration for brand extensions in general...

In the strip above, the pair lovingly dissect the primary emotional legerdemain underlying most classic advertising - the fabrication of an emotional need that can only be satisfied by the featured product.

If everyone assumes your brand is cool - does it matter whether it is or not?

[Thanks to Daniel for inspiring this post with a question about gum.]