Feature Creep or Why You Shouldn't Give People What They Want 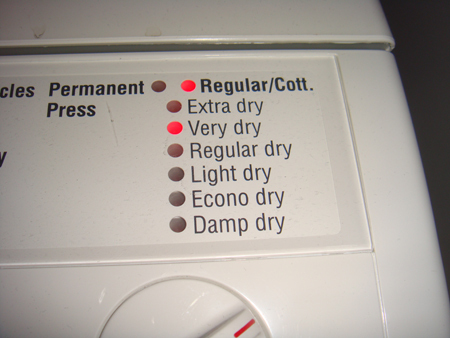 How many types of dry do you need?

Feature creep is term that came from software development where it was used to describe software that over-emphasizes new features at the expense of core functionality and design imperatives.

It contravenes the primary rule of the Unix philosophy for writing programs:

do one thing and do it well

But it has spread outside of software and is most encountered in technology products that build in so many features it actually makes the products harder to use.

It's a symptom of the paradox of choice - people think they want loads of features, because we think we like choice, but actually we hate it.

As James "Wisdom of Crowds" Surowiecki points out:

The strange truth about feature creep is that even when you give consumers what they want they can still end up hating you for it.

The solution is not to give consumers what they think they want:

We don't ask consumers what they want. They don't know. Instead we apply our brainpower to what they need, and will want, and make sure we're there, ready. I love this logo.

It's everywhere in New York - on vans and shops - and every time I see it it makes me smile.

I point it out to people and each time they're surprised.

Can you see it?

OK - look at the negative space between the E and X. This picture really highlights it.

Now what do you see?

The arrow is practically subliminal - you almost never notice it unless it's been pointed out - but once you see it you it jumps out every time.

It's a masterpiece of design - transforming a mundane and over used symbol, designed to communicate speed and precision, and elevating it into something beautiful and rewarding.

The designer, Lindon Leader, sums up the effect:

The power of the hidden arrow is simply that it is a “hidden bonus.” Importantly, not “getting the punch line” by not seeing the arrow, does not reduce the impact of the logo’s essential communication.

It's similar to the layered meanings that that Jason discussed here. The design rewards the viewer when they 'get it', but not 'getting it' doesn't detract from it's ability to communicate. Rather, it adds another layer to be appreciated.

What's more, the hidden device becomes a social object of sorts - a piece of social currency:

I can’t tell you how many people have told me how much fun they have asking others “if they can spot ‘something’ in the logo.”

Easter eggs have long been a feature of films and games - the hidden message or object rewards those who are more involved and digging them out triggers the formation of knowledge communities - it seems like a very sensible trope for brand communicators to embrace.

A hidden bonus is a great way to start conversations. 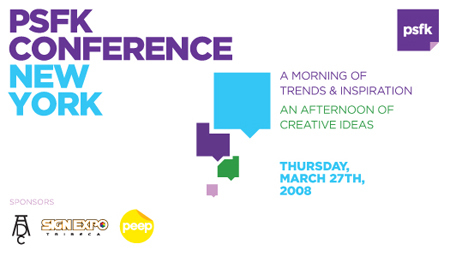 [If you're coming then do come and say hi. We were thinking of going drinking the night before as a bunch of people will be in town - a likeminded beersphere type thing - anyone interested?]

The people on the panel represent a cornucopia of cultural nous - we have Sascha from Flavorpill, Jen from Gothamist, and Steve from Thrillist coming to share their insight into the Big Apple.

Since I moved to New York a few weeks ago, I should be an excellent moderator as I'll have very little to contribute to the discussion.

But in the spirit of preparation and collaboration - whether or not you are coming - is there anything you'd like to see them discuss?

Buy One Get One Free Inspired by a traditional Argentinean shoe and challenged by the continent's poverty, designer Blake Mycoskie set up TOMS SHOES, with a fanstastic vision:

So, for every pair of shoes you buy, they send another pair to children in need in South America.

Like the OLPC offer, except it's not a promotion - it's built into how the company operates.

Ideas like this are fantastic and just waiting for some big brand to get involved and start doing good as part of what they do everyday, rather than as part of a CSR programme.

{Thanks to Kassie for the head's up} 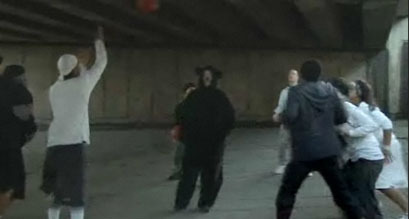 So this WCRS ad for cycle safety, in which the narrator asks you to count how many passes the white team makes, thus diverting your attention, which makes you miss the moonwalking bear, is a powerful idea, but unfortunately it's a copyrighted one.

The original from 1999 is practically identical, and the originator was apparently not consulted.

I'm not going to get into the originality argument right now.

But if you are 'inspired' by something you have seen online, you really have to assume that someone else out there is going to have seen it.

By the same token, thinking that no one will catch you ripping off an idea that exists elsewhere in the same exact form belies a staggering lack of understanding about how the digital world works, regardless of how many social sharing options you put on the website.

No one is smarter than everyone.

My mate Edd sent me to Sperm for Tickets - a new website that offers to trade festival tickets for the healthy swimmers of young men.

Apparently fertility clinics in Ireland are currently in crisis - donations have plummeted over recent years - and so they've developed a very new approach to soliciting semen, targeting younger men from all over Europe to expand their potential universe.

In terms of understanding your audience and what motivates them - it's inspired. The incentive is spot on and the courier service removes one of the key barriers to donation.

There's something very strange about the idea but it's a remarkable solution to a challenging problem.

UPDATE: Edd points out that this might be a hoax.

Modernista's new website has just gone up and it has heartily embraced its distributed identity.

Rather than aggregating the places it lives online like the Zeus Jones homepage, the site itself is only a navigation bar that guides you around the elements of agency on the web - its Wikipedia page and Facebook profile, with the work displayed on flickr and youtube.

It's an interweb thingy that uses the internet. We are beginning to see a blurring of the distinction between on and offline, manifested in lots of different ways.

One of the most obvious is geotagging- attaching metadata to specific locations.

Yellow Arrow was one of the first, deployed with stickers and SMS.

Socialight is a virtual system of stickytags your mobile can see.

Tagmaps uses geotags to create maps that represent how we see the world - a weighted tag map overlay shows what people collectively think the salient features of a locality are, in a way that normal maps can't - for example, normal maps don't understand that things are different at night.

And when you can point and click on the real world, what does offline mean? 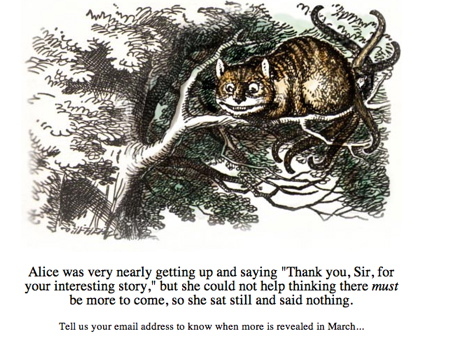 The ever experimental dudes at publisher Penguin UK have something new brewing.

Ever since the emergence of the idea of hypertext, literature geeks [like myself] have been thinking about how non-linear narratives might be constructed.

You don't need clickable links to be hypertextual - Nabokov's staggeringly brilliant Pale Fire is a non-linear novel of sorts, where the exegetical footnotes to the preliminary poem are themselves the [meta]narrative.

But if you believe, as I do, that the generation that has grown up naturally creating their own hypertextual narratives as they click their way through the web, that transmedia narratives that leverage the true media behaviours of this generation are coming to the fore, and that people should read more in general because reading is for awesome people, then the time is ripe for another pop at hypertextual literature.

Jeremy has put a teaser post up on the Penguin blog, which suggests they might be up to just that, and with Dan Hon / Sixtostart, masters of the ARG, involved the results are bound to be interesting.

Go sign up here and see what's through the looking glass. 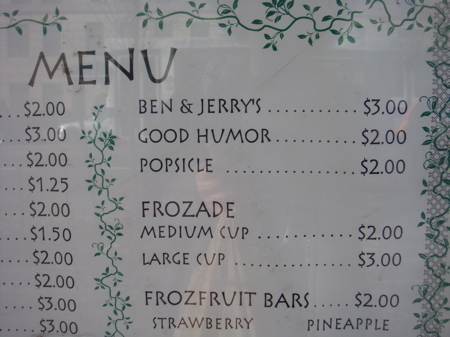 Antidepressants are among the most commonly prescribed and most profitable drugs in America. Very little money is spent in the U.S. to promote awareness of healthier alternatives.
[From here]

Good humour for 2 bucks seems like a bargain then, considering.

One of the things you can't miss in the USA, should you consume more than a few minutes of commercial television, is advertising for prescription drugs.

As with all things, novelty tends to jar - so coming from the UK where there isn't any, you are first struck by a] the fact that there is some and then b] just how much of it there is.

For things you didn't even know were things - like Restless Leg Syndrome [which is in fact a real thing - I checked because, well, it sounds like it isn't - but doctors suggest that it isn't as prevalent as the TV campaigns might suggest - and specifically that it ISN'T just a tic, but a serious condition that causes pain].

The ads all end the same way:

And the disclaimers are usually hilarious - the side effects of all medications almost always include exacerbation of the original symptoms: anti-depressants may cause suicidal ideation.

Which is something that doctors understand and take into account, which is why we have prescriptions.

Ultimately, this is a reflection of the sanctification of autonomy - as patients have become more involved in their health decisions, they need to be better informed - which leads to Web M.D. and, more recently, Google Health.

Whether that leads to a healthier, happier society  is debatable. The issue here is one of informational asymmetry.

Doctor's know stuff we don't. That's why we seek their advice. But when people know things we don't, there is a tendency not to trust their advice.  Think about mechanics, or builders, or any other specialist provider who tells you that you need expensive work done - and you know there's no way for to know if they are telling the truth.

So we look to arm ourselves with information, so we can't be hoodwinked, to allow us to make informed decisions.

Which is great when you are buying a car - the internet has completely changed the dynamics of that market, empowering consumers with the fair market price for a sedan.

But our health is significantly more complex than other purchase decisions. Medical school takes a long time. And without that foundation, a little knowledge can be a dangerous thing.