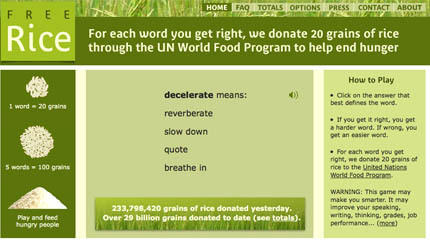 The Free Rice website blends two excellent things: using advertising money to donate rice via the UN World Food Program - which is a GOOD THING - and a word definition game.

As it says, for each word you get right, they donate 20 grains. They could just say "endlessly refresh the page" as each click could donate, but they make it interesting, rewarding and cumulative, which is far more effective at driving endless clicking.

Build your vocabulary and harnass the awesome power of intertising to make rice appear from nowhere now.

I Eat With Fun 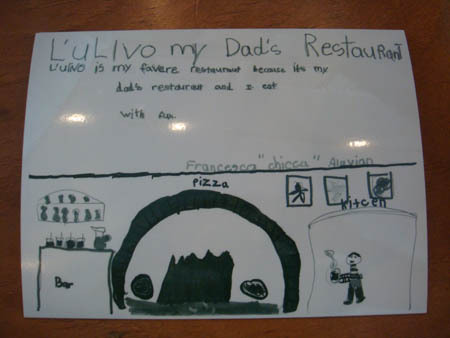 Spotted at a restaurant in New York's trendy SoHo.

What better way to say this is a family restaurant than to get your daughter to design the back of the menu - love it.

My mate Mimi just sent me this piece of Friday fun.

I sometimes think it might actually be too easy to satirise the advertising industry.

But it's still funny. 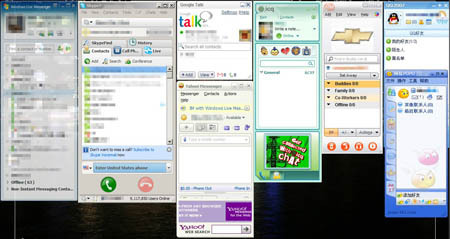 Facebook just launched instant messaging, which quickly reminded me how addictive IM can be, and got me thinking about different modes of communication.

[There was also another thought about the inevitable rise of web based applications, and something to do with Facebook being an operating system, but I'll leave that for now.]

But I'm not entirely sure that's the only way it works. I've noticed that some people only use certain channels. I text my dad, email my mum. Younger friends [say below 25] never really seem to email, they just use Facebook.

[In fact I've seen various pieces of research that say that 'the kids' like SMS best, then email. So they love asynchronous communication. Probably helps them multitask and distribute their attention and that.]

And, when I stopped using MSN Messenger a while back, there were a few friends who I just stopped being in touch with, until I logged back on, because that's how we used to communicate.

Thing is, all these channels, loosely, enable the same thing - communication, admittedly in different ways.

But some people are much more comfortable with some than others, even though all will reach me.

Which, perhaps, is something that applies to our brands that are acting like people.

Brands can reach an audience in innumerable ways. But perhaps some of them are more comfortable for the audience in question than others.

And maybe some brands just wouldn't use Facebook to get in touch, because it's not who they are and never will be.

Noah said some good stuff on stage at PSFK that we've been talking about for a while [that he kindly, falsely attributes to me]: that brands need to act like people, especially in a digital context.

We naturally anthropomorphize everything. We can't help it - we're incredibly solipsistic. But it's also because most of our big ol' brains evolved to help us understand other people. It's really very complex. I have to model how you might respond to what I might say, and how it might influence them and so on.

So we see faces in everything and think computers are out to get us when they crash with that deck unsaved.

Stephen King picked up on this. Hence the idea of brand personality was born and agencies began to attempt to link specific personality attributes to products.

Now, if brands want to play in our social media spaces, if they want to come to our party, they have to act like people. By being nice. And charming. And polite. By asking our names, or getting us a drink. By being interesting. Or useful. Or flirtatious.

Not just shouting about how great they are the whole time.

Is it just me or is this arrow moving in the wrong direction?

I found it oddly jarring, so I took a long photo.

Matt has a good post about introducing a function that automatically loops the long photos, turning a micro narrative into a recursive system, which makes complete sense to me - as soon as I took the long photo I instinctively wanted to loop it - repeating patterns endlessly repeating appeals.

Coincidentally, he also links to this burgeoning collection of 11 second shots. 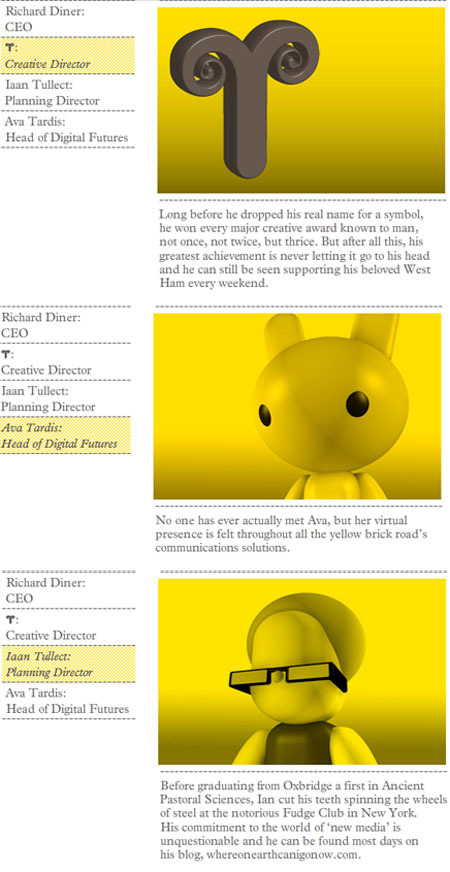 Red Brick Road's new website defines the agency in contradistinction to the rest of the industry, which is fairly standard for new model agencies - the agency is called Red Brick Road because it's the path that Dorothy didn't take, the path less travelled so to speak.

But their Yellow Brick Road satirical site sends up the industry and made me laugh on a sweaty Friday afternoon.

I like the typologies of agency folk above but, to clarify, I don't DJ anymore, especially not at the Fudge Club.

Defining yourself by what you are not can be a defensive positioning, especially for a challenger brand so clearly linked to the establishment it's poking fun at, but this is pretty charming on the whole. 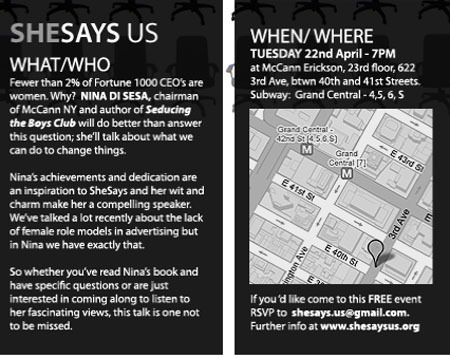 My mate Alessandra is starting monthly events in New York for women in the advertising industry, starting next Tuesday, under the banner She Says.

Apparently I'm not allowed to go.

My mate Chris made this - the suicide cult finale to the Creme Egg season.

I'm always staggered by the amount of patience and skill this sort of work takes - endless hours to get seconds.

The gooey money shot is worth it though.

I love how Creme Eggs are only sold between January 1st and Easter - relative scarcity makes them taste better.

PVR Pressure or Do Brands Need to Create Content Anymore? 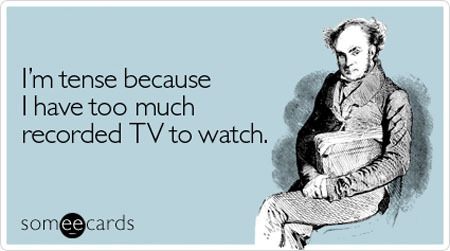 My mate Nancy is involved with an ecard start up called someecards:

for when you care enough to hit send.

They have a panoply of wonderfully offensive electronic missive material for your delectation.

I chose this one because it references an interesting media behaviour that I keep noticing.

There's too much media. Too much content constantly crying out for attention. So we develop tools to manage the flow, allowing us to timeshift and placesshift how we consume content. But there are only so many hours in the day.

Content keeps building up, in the PVR, the RSS reader, the inboxes, the media streams.

And if you leave the stream for a couple days, there's this huge backlog of content that needs to be cleared.

I've got to go home tonight - I've got loads of stuff on Sky Plus I need to get through.

I just delete everything in my inbox / feedreader.

Too much of a good thing and it becomes a chore. The signal to noise ratio gets confused, because, when there is too much signal, it becomes noise.

Which leads me to wonder. About brands and that.

But do we really need more content? Or are we tense enough as it is?

Perhaps there are other things brands could do, rather than adding to the ever-expanding infinity, to be entertaining or useful. To earn some attention.

Someone has to help alleviate all this tension.

Could the future of brands be in collation, curation, aggregation, dissemination, navigation, catalysation (insert other words that end in -ation of your choice here) - rather than traditional creation?