When I was in London I was lucky enough to be invited to a screening of the new BBC flagship drama Merlin at the IMAX.

The show is a prequel to the Arthurian legend: it tells the story of Merlin and Arthur as young men at the very beginning of their own myths.

[Think Smallville for Camelot and you begin to get the idea.]

Like Smallville, it has a weight of myth to proleptically reference, adding in layers of meaning to anyone with a working, or even glancing, knowledge of the British equivalent of superheroes.

Perhaps appropriately then, it looks like the BBC have made a decision to build a robust, expansive and, dare I say it, transmedia world around the new show. There's a Youtube channel, and fan forums waiting with bated breath for the premiere.

The Merlin website features a bunch of background snippets but shows promise of much more to come.

I was assured that this is the first BBC show where they have allowed the producers to really build something as ambitious as they wanted.

[I can only imagine the bureaucracy that comes with a bbc.co.uk/ url.]

There are tricks to be learned, secrets to be revealed via mouse click incantations, and a stunning little augmented reality thing that really needs to be experienced.

I got a chance to play with it first hand at the screening. An augmented reality technology developed by Inition allows you to experience conjuring: a webcam image of yourself responds to a specific pattern on promotional postcards, and creates 3D images and video into the palm of your hand.

The show premieres this Saturday 20th September on BBC 1, so set your DVR and see if you can get hold of one of the postcards.

The Impact Horizon or Scream if you want to plan faster

In accelerated times, alacrity is key.

Things are moving so fast that culture is a moving target [forgive the pseudo-military metaphor] and if you don't aim slightly ahead you are going to miss it.

The dude behind Dogster has a great expression for this: the impact horizon. Planning too far beyond the impact horizon dooms you to fail because things will have moved on so far.  You need to keep an eye on the future but not too far out - long range planning should now mean a couple of years at most - and you need to move fast.

In response to this need for speed, the IPA has developed the Fast Strategy initiative.

The first event earlier this year pitched teams against each other on a live brief and had a deck of cards with 50 word tips from some of the industry's great strategic thinkers to entertain and inspire.

The IPA has a second Fast Strategy event coming up on October 1st and are putting together another set of cards.

For reasons best known to themselves they asked me for one and I happily agreed, as long as they didn't mind me posting the first deck. You can download it below:

There are lots of smart people sharing stuff on the day - Rita Clifton, Adam Morgan, Richard Storey - and there are early bird tickets available until September 18th, so go ask your agency nicely and tell them you are saving them money by being FAST. 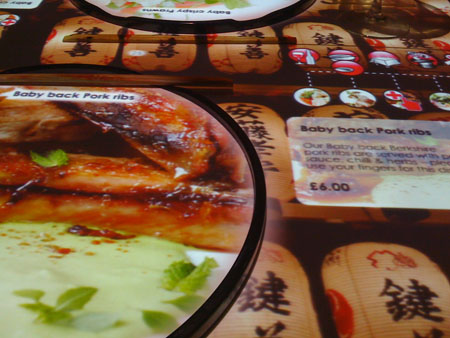 While I was in London I had a digital dinner at a new restaurant in Soho called Inamo.

OK - so my dinner wasn't really digital, it was Asian fusion and it was tasty [the chef is a Nobu / Hakkasan alumnus] - but the experience was.

Instead of menus, projectors above you turn your tabletop into a screen. A touchpad allows you to browse through the menu and order directly from your table, eliminating the need to catch a waiter's attention.

The system also lets you change the imagery on your table, see what your food will look like, order a cab and play battleships.

It was a lot of fun and the food does indeed come very quickly [In-a-mo].

Definitely worth checking out for a taste of the future - I'm convinced we will see more and more interactive installations used in retail environments - especially if you are taking a geek out for dinner. 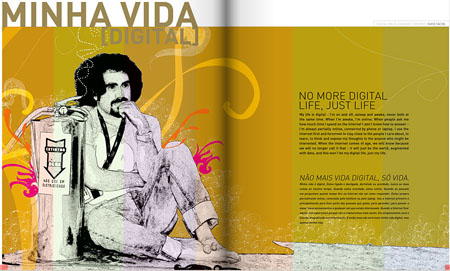 When I was down in Brazil at the Wave Festival a nice lady snapped me sitting in the corner of the conference room with bare feet, cuddling up to the fire extinguisher.

The Brazilian magazine Meio Digital (Digital Media) just used the picture for a feature they call Minha Vida Digital (My Digital Life), which asks people why digital is so important in their personal and professional life.

I wrote a few lines for them - it opens with a binary/digital joke that I'm not sure really works - but the point I was trying to make is that the distinction between real life and digital life is rapidly vanishing:

My life is digital - I'm on and off, asleep and awake, never both at the same time. When I'm awake, I'm online.

When people ask me how much time I spend on the Internet I don't know how to answer - I'm always partially online, connected by phone or laptop.

I use the Internet first and foremost to stay close to the people I care about, to learn, to think and expose my thoughts to the anyone who might be interested.

When the internet comes of age, we will know because we will no longer call it that - it will just be the world, augmented with data, and this won't be my digital life, just my life.
My brother puts it more succinctly:

There is no real life; you're either online or AFK. 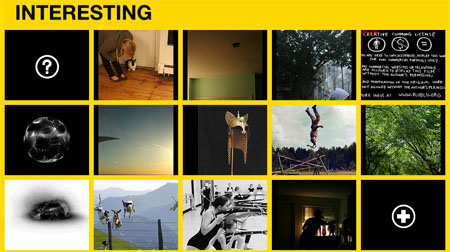 It is once again time for me to undertake my daring and dangerous annual excursion into liminal space.

Last year, we examined how Herd thinking operates in a liminal space by organising a transient collective, or swarm.

This year we shall be looking liminal space with a postcolonial eye, discussing the cultural domination of the west as expressed in the Bakhtinian carnival expressions of costume tropes.

That is to say, I'm heading back to the UK for Bestival.

[TIGS may be quiet for a while as a result.]

However, to further extend the excursion, I shall also be judging the digital category of the Campaign BIG Awards while I'm there, to look at how groups form and achieve consensus.

When I get back to NYC I'm speaking at Interesting New York - yet another liminal space, coalesced around the desire to congregate in the real world and share things, without talking about work.

I shall be boring people by droning on about one of my obsessions: recombinant culture.

But there are lots of people talking about interesting stuff too.

You should come, if you are in NYC. It will be awesome.

Although I can't guarantee any costumes.