Bet on the Future 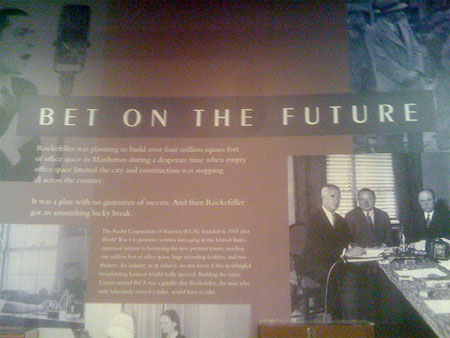 The Rockefeller Center in New York is, in my opinion, one of the most inspiring buildings in the world.

Like most things, the inspiration comes not so much from the thing itself, but the stories that surround it - and like all the best stories [and yes, alright, go on then, brands too] it has many lovely little pieces that all, somehow, fit together.

John D Rockefeller leased the space from Columbia University in 1928 to build a venue for the Metropolitan Opera.

Then, in 1929, the biggest stock market crash ever happened, for reasons that no one can really explain, and the USA entered the Great Depression.

The Metropolitan pulled out of the project and Rockefeller faced a very serious decision.

"It was clear that there were only two courses open to me. One was to abandon the entire development. The other to go forward with it in the definite knowledge that I myself would have to build it and finance it alone."

He decided to push ahead as the sole financial backer of the biggest development project in the history of the world.

It gave thousands of people hope, and jobs, throughout the Depression.

Rockefeller had no promised tenants for the building, but happened to have an interest in an emerging technology called radio.

Rockefeller, by all accounts, hated popular music - he was into opera - but he gave the leg up needed for RCA and NBC and the beginnings of a popular mass culture.

[Roxy once said: Don't give the people what they want - give them something better.]

Rockefeller made one of the biggest bets in history, at the very beginning of the worst economic crash of modern times, on the future.

Next year is going to be hard. No denying it.

But we live at a time where the economics of cultural production are being radically decentralised - where never have so many had a voice in the history of humanity, nor social motivations been so empowered to create culture and effect change.

Where, fundamentally, economic motivations are no longer the only supposed driver of human activity, if ever indeed they were.

The beginnings of a new kind of culture, created bottom up by the many, not top down by the few.

I'm betting on the future.

Words are Where We Live 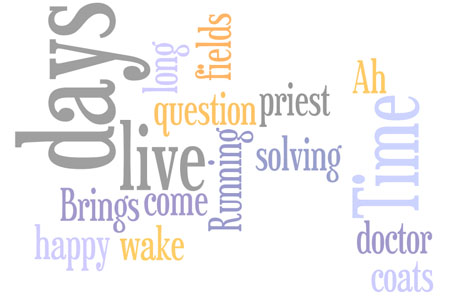 [A word cloud of the poem Days by Philip Larkin, by Wordle]

A Hare Krishna dude in relevant regalia puts his arm round my shoulder and begins to walk with me.

ME: Uh - again - thanks - I always thought it was more Pinker/Gladwell but Einstein is cool...

HK: It is Christmas and I am Hare Krishna and I have this book that will help you, if you would like to make a donation...

ME: Do you guys do Christmas?

HK: It contains the transcendence of Krishna.

ME: Isn't Krishna a Hindu deity? And aren't all Hindu deities part of the same Brahman godhead? Shouldn't you be a Hare Brahman?

HK: Hinduism is a later corruption - Hare Krishna is much older.

ME: Does being older make it right? Haven't we learnt a lot of useful stuff recently?

HK: Have you read the Bhagavad Gita?

ME: Well, yes - at least bits of it in translation - I don't speak Sanskrit..but that said isn't the whole issue of translation quite problematic with ancient scripture and revealed truth and that? I mean linguistically alone, without even getting on to ontological translation or cultural context...

HK: I love Krishna - Krishna is GOD - he tells us to love him.

ME: Wait, hang on, that's heavy - GOD is a MALE person called Krishna? Doesn't that seem weird to you? Why not a girl? Or a teapot orbiting earth?

HK: I feel him, he has revealed himself to me as Krishna.

ME: That doesn't help much dude. What is GOD?

[And - also - using an endogenous sensation as proof of an exogenous abstraction, without any recourse to correlative, let alone objective correlative, whatever that might mean, is logically on very shaky ground - see the brain in the vat argument.]

HK: These are just words - you will make your self unhappy thinking this way - God is Love.

ME: I know they are just words but that's what we've got - but if GOD = LOVE, LOVE = GOD, then how can you love God, or God love you? That's like saying you LOVE LOVE, or GOD GOD. It's semantic tautology...it's circular!

[Whether a conscious or unconscious Hamlet quote I don't know.]

If you don't stop thinking like this you will be driven to suicide. God is Love. God is beyond words. You can only experience love.

ME: So - if God is beyond words, what's printed on the pages of this book you are trying to sell me?

[Hare Krishna gets angry with me and literally storms off. I try to shake his hand but he refuses. I wonder what happened to the love for a bit and then go for a pint.] 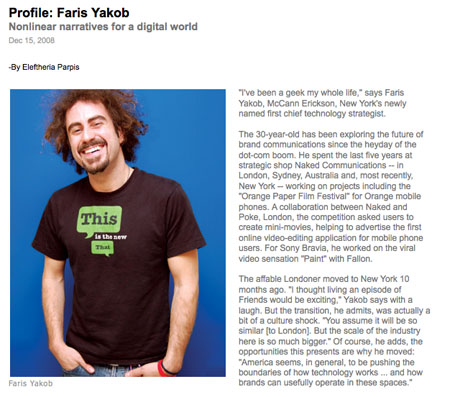 Adweek did this nice piece about me and some things I've said and Derek managed to get a nice photo of me and that so I thought I'd put it here.

But now I'm a little embarrassed about posting it so I'm going to write another post really quickly.

I wish I hadn't lost an idea for one on the underground. 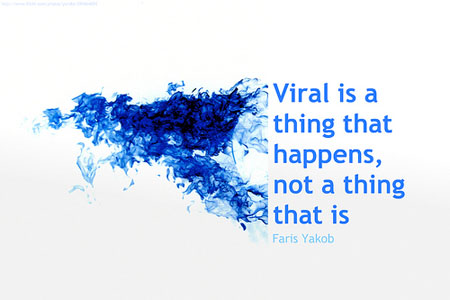 Will's digital bites are the successors to Lynetter's onlinedevslides - beautiful slides with facts and quotes about this stuff made from ones and ohhhhs.

He's kindly done one of something I said about 'viral' being a verb. Although it's all spreadable now. Or indeed, spread, if it's successful.

He also does an excellent one on psychology called mindbites -  head over and see them in all their tiltview glory. The lovely Dr Stephanie asked me to write a review of Groundswell for the International Journal of Advertising.

I start off with a kind of anthropological musing on our social nature and the dialectic between individuality and community and that, shout outs to Mark and Clay and Jeff, but eventually I get on to the book itself.

The gist of it was I really like the book - it's full of usefulness and inspiration and good frameworks and that - it's only let down in some sense by its very bookness:

However, to really understand social media, it’s not enough to read a book: you need to live it.

So do read the book, but get out there and start being social as well.

The blog for the book continues the conversations.

[Update: This is a very thorough guide to social media etiquette via @misentropy]

On the Web You Control the Relationship

The Interwebs
View SlideShare presentation or Upload your own. (tags: media social)

I quote others only in order the better to express myself. And the world will be overlaid with data and reality will be augmented with it, and it will provide geotility you can see.

The Socialisation of Media

This is the panel discussion thing on social media I did a couple of days ago for the PSFK Good Ideas salon.

It was all good early morning fun [I think I may have been hypercaffeinated] - and there's a party to celebrate being upbeat in 09 to end the series off.

One of the things I got asked was what's going to happen in 2009. Whilst I have no idea, I've never been one to shy away from a little future gazing and I think one of the things we'll see more if is the continued blurring of the modalities of media.

Specifically, I think there is going to be a increase in the socialisation of 'mainstream' media.

I think things like the twitter backchannel that Fallon/Scifi put together for Eureka, and The Hills backchannel that Area/Code did, give an indication of how a previously isolated media consumption experience makes a virtue of its nature as a solidarity good whilst it is happening, rather than later over the metaphorically cooled water.

Newspapers embrace comments and blogging and RSS, opening up their journalists to the discussions that make blogging the essentially social thing it is.

Posters seek content from people, leveraging scale and vanity to avoid being ignored.

In a time when budgets for media are inevitably going to be cut [despire the long standing argument that it pays to invest during a recession] old media will have to embrace the social content ecosystem that surrounds it.