Twestival may be a tweologism too far but it's a great idea and I'm proud to be a tiny part of it over here.

On Feb 12th in over 100 cities around the world, lots of people who have mostly met each other over twitter are throwing parties to raise money for charity: water.

In New York we have pulled out all the stops - as the city with one of the highest twitter populations in the world - I assume - we felt we needed to make it large.

[I'm also proud to say that McCann Erickson NY has come on board as headline sponsor in New York, which is really awesome.

If you think you might like to get involved as a sponsor in some way - there's some info here about why its a good idea and how to help.]

We put together this deck to explain what it's all about because, well, because some of us think in decks now, but also because there is something really useful about the way decks package up data.

They reify information - give it thingness, circumscribe its edges - which makes it easier to pass around and share with people and that, which is what makes slideshare awesome.

So - have a look - and come to NYCTwestival - there are only a handful more early bird tickets for $20 available - details on the website and our facebook event page.

You can also buy VIP tickets for extra awesomeness.

Unless you live somewhere else, in which case feel free to go to a closer iteration of Twestival.

One party, lots of places, lots of money for charity - officially a GOOD THING and it will be rocking.

And if you can't come, you can donate.

And if you can't donate, you could spread the word and maybe tell 20 people, or post something, or tweet something.

And if you can't tell anyone that's cool too, but you'll feel the warm fuzzies if you do. Promise. 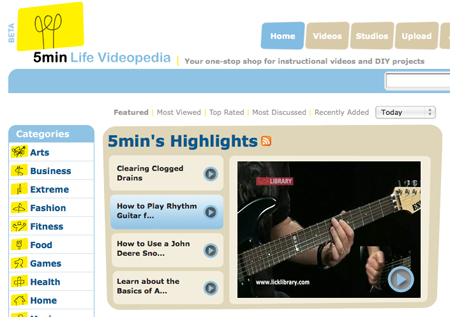 My mate Vik put me on to this site 5Min that is tackling promotion in a similar way to Google's Content Network: by using the web as the distributed platform it is.

As I said then, Google was turning the network model on its head by aggregating lots of eyeballs from across the web into a single distribution platform for video - pumping content into the world, not driving traffic to the content.

Similarly, 5Min syndicate their content to lots of other sites via contextually relevant placements.

As a video how-to site it sits among a number of destination competitors that are pretty well established, and so it's taking the mountain to Mohammad, so to speak, by adding in useful video content into niche vertical sites.

This is, in fact, how I've been thinking about advertising in general recently. I think it started with a conversation with a lovely dude from Federated Media.

We were talking about doing awesome things online and I snorted derisively about banners and that, because I am a sophisticated digital type person and know about banner blindness and 0.0000001 click through rates and that everyone hates them and so on.

And Chas from Federated said, well, yes, banners and that are annoying - but I have no problem with content that happens to come in a 336 x 280 pixel LREC.

And I thought, that's interesting isn't it.

A lot of what I've been talking about recently has been about re-thinking how we use media.

Since brands can have direct relationships in digital places, it seemed to make sense to focus on making awesome things people want to spend time with because they are interesting and useful and that and then using paid for media to invite people to let people know about it.

In fact, I was thinking we shouldn't create advertising, we should create content, and export that content into the world via bought media so people could sample it without having to come straight to us, and if they liked it maybe they would come and play with us and we could earn their attention, instead of buying it repeatedly, from there on in.

Wouldn't that be nice?

I was showing my mate Chris the eyebrow dance spot below and he wistfully wondered why they hadn't synced the eyebrows to the music properly, which reminded me of the film above, where the music is synced to the facial movements via electric shocks.

It gets very awesome [and, one assumes, relatively painful] towards the end.

Probably couldn't get away with electrocuting little kids though.

The Kind of Films the Internet Likes

Following on from yesterday's recombinant musings, which touched on the fact that when we make ads we rarely make the kind of films that the internet likes, we bring you the new Cadbury's spot, from Glass and a Half Full Productions [or Fallon London.]

They are getting good at making films the internet likes.

Part of the secret seems to be:

Leave out all that stuff about the product. As much as you can anyway.

Make people feel something nice, link that association to your brand.

Give people things to copy, or respond to, or play with.

Don't take yourself or your brand too seriously.

Look out for the Sony zeotrope too.

Oh and have a lovely day!

[Update: Via a deal with photobox you can get a brow over picture of yourself on a mug if you want. For hot chocolate I guess.]

Brand Heritage and Marketing the Unmarketable 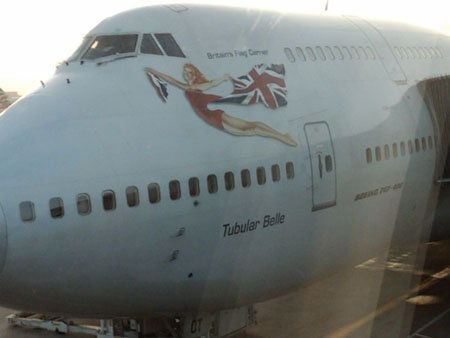 Over on Twitter, @paulejgraham shouted out an ad, presumably from the agency he works for:

Quick trumpet blow (soz)... Richard Branson just called this the best ad made by any Virgin company, ever: http://bit.ly/X1iz

It's cute - and whether or not you admit to being shallow, there has long been talk about which airlines has the hottest stewards.

It reminded me of the Virgin Atlantic flight I took back on my way back. Virgin Atlantic appropriated the military trope of painted ladies on the nose cone, and just like on bombers they have different names.

Because I am a brand geek, this one really tickled me. You probably know why already.

In 1973 Mike Oldfield had been knocked back by every major label because his music was considered 'unmarketable'.

Demos got to The Manor recording studio, which was being run by Richard Branson. He decided to take a punt on it and Tubular Bells became the first album on Virgin Records, essentially the foundation stone of the entire Virgin empire.

Virgin was built on the idea of marketing the unmarketable - a heritage worth celebrating. 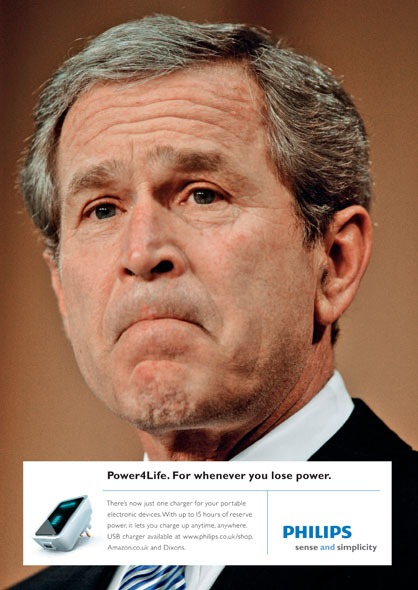 A nice chap called Gareth sent me this - running tomorrow in the UK - which I have posted because:

1. It's inauguration day and it felt like I needed something, now I live over here.
2. We should never forget the power of culturally relevant timely current events based communication
3. The whole having different power chargers thing for every single thing I own REALLY ANNOYS ME.

I'm with Martha Stewart on this - it's wasteful and frustrating and a function of how companies are structured not how I live.

Best thing Nokia ever did [ok apart from the NaviKey interface] was have the same lead for every phone.

At least until the N-Series.

Remember how kettle leads would work on everything? That was great. I still use one as a UK adaptor for my Mac power cable.

So I'm glad Philips are trying to sort that out.

Anyone seen any more?]

[Update: Looking forward rather than back, Pepsi are asking how the new President can 'refresh' the USA.]

What some of my lovely creative friends here do in between.

Four Feet From a Rat 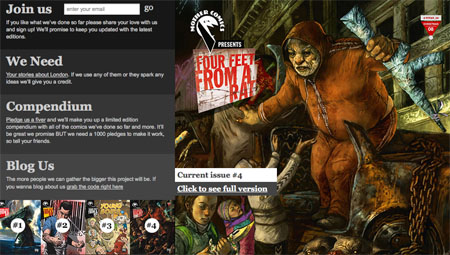 My lovely mate State just turned me on to the fact that Mother London have started making comics.

Distributed free via Time Out and available online as portable document format files, Four Feet From A Rat are short comic stories about the hidden parts of London, written by Mother.

You can see them online here thanks to a site from Poke.

4 issues are available on the website and they are looking for ideas or story submissions - open source comics yo - and will do a microprint run if 1000 people pledge to pay a fiver for them - crowd source funded on demand printing yo - and they have an embed code - distributed the web is a platform comics yo.

[Sorry about all the yos. While I was ill I watched the first season of The Wire. More on which later possibly.]

File under: Agencies making their own stuff. It's still branded content, but the brand is the agency.