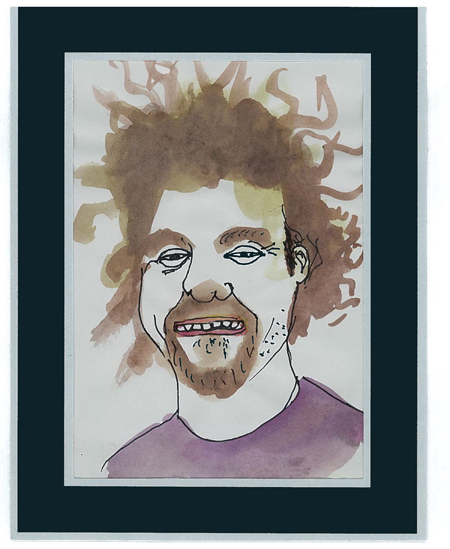 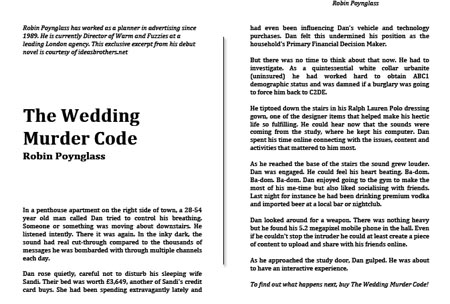 Rob&Tom - [the Idea Brothers] have 'discovered' this except of an upcoming novel written by a seemingly obsessed planning strategist type person.

That’s why we were so excited to hear about the debut novel by Robin Poynglass, Director of Warm and Fuzzies at a leading London agency. ‘The Wedding Murder Code’ is so titled because according to research, books with ‘Wedding’, ‘Murder’ or ‘Code’ in the title are more likely to be bestsellers. Poynglass argues that all three words together should create a blockbuster. But can The Wedding Murder Code live up to the hype and avoid ‘plannery’ language? We think the answer is a resounding yes – but judge for yourself with our exclusive excerpt… Click the link below to read.

'Plannery' language aside, it does highlight the fact that personas are not very convincing as real people.

[The use of personas grew out of web development and user experience design then moved over into more traditional segmentation and targeting and that. I think.]


A long time ago I wrote a post called the paradox of planning, which basically just points out the more time you spend being a planner, the less like a real 'consumer' you become because you are cognitively engaged with brand communication all the time in a way that most people simply aren't, which makes it harder to some aspects of your job.

It may also make it harder to write novels. Although it may not. Perhaps 'plannery' language is only used because that's what we think the audience wants, that's the relevant grammar for the space. 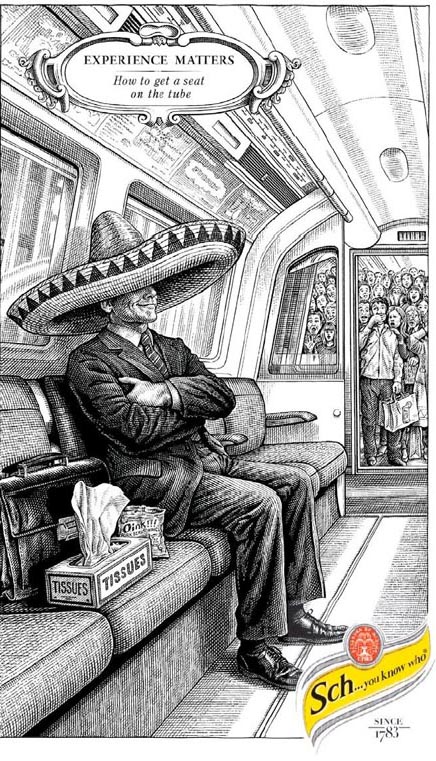 Mother are executing a low latency campaign in the UK for Sch....weppes that reacts rapidly to news, as in the execution above [which was pulled due to concerns about sensitivity].

See the rest of the them here.

I'm going offline for a few days - I'll catch you when I get back. 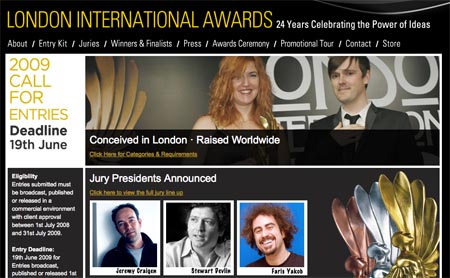 The London International Awards are a 24 year old show that honors advertising, design and digital.

This year they have introduced a new category, called the NEW category, which, like the Content and Contact category at the Clios, and the Titanium at Cannes, are designed to celebrate ideas that don''t really fit in anywhere else.

[Which is good, as I said in the link above, because mutations are the key to evolution.]

Or to put it another way:

Entries for The NEW Category are for work that merges the power of an original idea with a relevant compelling execution. Emotionally inspirational, imaginative work, effectively creating new dialogues, creating new spaces of interaction, altering perceptions, setting new benchmarks that invite and reward at every level of engagement.

Submissions can be singular or multiple, offline and/or online, multi-platform interactive experiences, and all cross media branded entertainment.

So, basically, participatory marketing or technology based coolness, or transmedia planning, or installations, ARGs, augmented reality, social media campaigns or any of the sort of stuff I think is awesome in general and tend to talk about on TIGS.

Which is why it's completely awesome that they have asked me to be President of the Jury for the New Category.

One of the cool things about this is that I get to pick the people on my jury.

So I thought I'd open this whole mysterious business of advertising awards up a little bit, and ask you who I should pick.

Now, I want to be completely transparent here: the final decision will of course be up to me and the LIA directors - I'm not turning this entirely over to the crowd.

And I have a few people in mind that I would like to ask because they are awesome. But I'm also sure there are lots of people I don't know who I should probably consider.

So - you've read the category description - who would you nominate to be on the Jury? 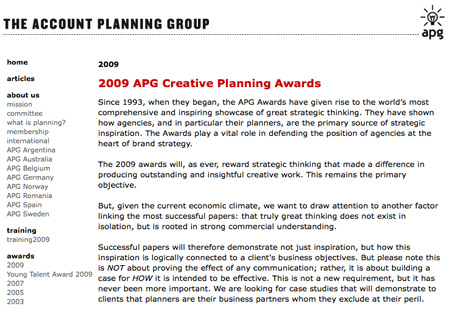 The APG awards wants YOU.

But this need not be the case! Anyone can enter, and from any country, so if you have some good strategic, commercially driven thinking you are proud of, it's probably worth a crack.

Here are some other things they would like you to know:

The APG awards deadline is on the 1st June. We are seeking non-traditional ad agency thinking - from anywhere! Read on for some answers to some frequently asked questions....

(1) Do the Awards reward non-advertising solutions?
We actively encourage papers concerning solutions that are non-traditional, and last time we saw some fantastic examples. Tate Britain won for an idea which was about the theming of tours (so more NPD than communications). Radio 1 won a special prize for a digital tool called Musicubes. Orange won for creating a piece of content with Frank Lampard that could be downloaded to your phone.
(2) Does my paper have to be for a big, well known campaign?
Not at all. Last time, although Sainsbury’s won the Grand Prix, there were awards for niche campaigns: Gold for Tate Modern and Silver for the Learning Channel. It is not to do with the size of the brand, but to do with the quality of the thinking.
(3) What if all the thinking did not originate in my agency?
Sometimes an agency inherits an idea from another agency, and needs to fit their solution around it. However, it might still be that your have made a valuable strategic contribution. It might be, for example, that you do not take credit for the macro strategy, but your contribution turned on a fascinating channel insight. Or, it might be that you team up with the other agency to create a paper that combines both of your contributions. We would really encourage partnerships, especially given the way most agencies work is increasingly collaborative. Last time, for example, Lucozade Hydroactive was written by both M&C Saatchi and Fast Track. We would love to see more of these in the future.
If you have not yet started on a paper, but would like to, do get going soon! Unlike some other Awards, it really shouldn't take too long to get it written, given that the thinking has already been done.

So come and have a go if you think you are strategic enough, so to speak.

As far as I'm concerned, award shows should be weighted heavily towards 'non-traditional' [if by that we mean new kinds of stuff] work, because we should be using awards to encourage commercially successful and generally ambitious experimentation that will help drive the industry forward.

More on that tomorrow. 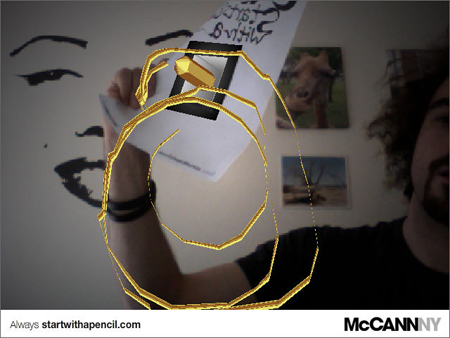 As part of our support for The One Show Interactive, we [we being the royal we of McCann NY i.e. not me] made this augmented reality pencil that lets you draw on the screen, to remind ourselves that no matter how in love with technology we are, ideas always start with a pencil.

If you happen to be going to the One Show Interactive awards tonight do come and say hi.

[You can print the AR symbol off the site - but here's what the prettier One Show version looks like.] 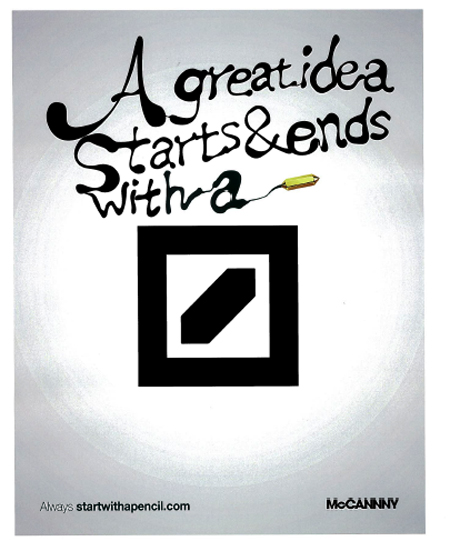 The Continuing Adventures of Be Nice 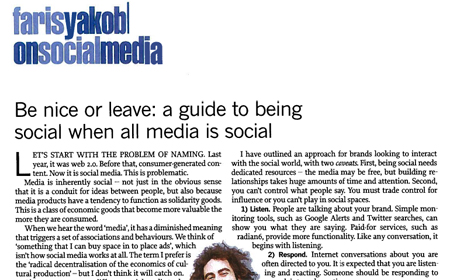 I wrote this thing, based loosely on my Be Nice or Leave talk, for the current issue of Admap (the magazine of the World Advertising Research Council).

[Since this is a re-articulation of the same thought in a different channel, I think its mostly media neutral, but may be slightly transmedia, here and there.]

I'm going to write more stuff for them as things occur to me - I like the idea of being an irregular regular contributor.

You can read the whole thing here - and check out the rest of the magazine for words from much wiser people than I, like the sage that is Paul Feldwick.

Bring People Together and Give them Something To Do

There is a line from Henry Jenkins' response to my transmedia planning post that I use in nearly all of my presentations.

[Mark uses it too, which makes sense.]

You can see it as a slide in Be Nice or Leave.

The key is to produce something that both pulls people together and gives them something to do.

I think this is probably the key to unlocking the awesome, and the biggest win for any kind of brand related action.

We are social creatures - I'm sure you all agree - but we need reasons to be social.

I suspect this is why we have sports and religions - we need to have reasons to congregate, and something to do when we all get there.

The true function of such things is almost certainly phatic and cultural and that.

This T-Mobile spot [which goes live today] from Saatchi London could have used the line as the proposition in their brief - and it seems to have turned out beautifully.