And the winning piece of culture is....

Culture is one of the those tricky words isn't it?

[ Actually, I find all words quite tricky - they squirm and wriggle and writhe, squeezing different 'meaning' into different 'contexts'...but eventually you have to let it go, once you accept there is no fixed 'meaning' to any of the noises we make beyond what I think it means and what you understand it to - assuming everything is in inverted commas is just easier.]

When I asked for pieces of culture I wasn't really sure what I would get, but that was the point - to offer something to you, dear reader,  and to get some of your interests in return, which can then be shared and so on.

I was a bit surprised that I only received one recombinant entry, considering my predisposition for such, and although it's great - The Muppets: Bohemian Rhapsody - it's not today's winner.

Other honorable mentions go to:

Contra Culture Up Up Down Down

Why would the janitor lie?

But I've decided to send the prize to CapC for the TED talk :

Devdutt Pattanaik: East vs. West -- the myths that mystify -

a fragment of culture that is itself cultural exegesis, using the differences in core myths to unravel the routes of clashing cultures - it seems to be the most 'appropriate' entry.

[CapC please ping me your address]

Devdutt references some very similar points to some of the things I was saying in this paper about brands as modern myths - so I found it very interesting.

"Understand that you live in the subjective truth, and so does everyone else." 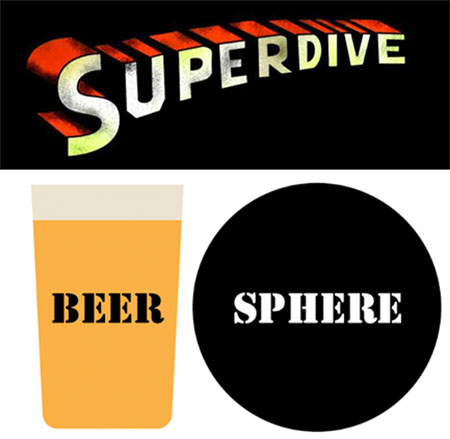 Christmas approaches and the end of the decade comes into view, leaving many people thinking about what they did and what they will do.

So to interrupt this introspection, BeerSphere NYC is back for a SUPER SPECIAL XMAS EDITION.

This year has felt transitional - but then every year does - and, as it draws to a close, now seems a good time to gently remind people that there are lots of nice, smart people in and around our industry that like a drink.

There are lots of very keen super smart young people who understand that the internet isn't a channel its a whole new set of rules, some fresh out of VCU and Miami, looking for the cracks in the hiring freezes to get their first pop at re-inventing the second oldest profession.

There are some really awesome grown ups who are fun and wise and kind and willing to help with a chat, and sometimes know about jobs and that.

Hopefully a few of both will come next week and then they can hang out and have a nice time.

[But don't do anything lame like turn up with resumes - that would be really uncool.]

This SUPER SPECIAL XMAS BEERSPHERE is sponsored by TIGS - Merry Christmas and thank you for your time and attention and comments and votes and everything.

[I'm buying a keg so you can all come and drink strong continental lager, until it runs out.]

[If you want to do keg stands [whatever they are] that's your prerogative.]

WHY: Because it's fun

See you there, if you come.


Earlier this year I was delighted to receive an unbound pre-print copy of Grant McCracken's new book: Chief Culture Officer - for reasons best known to Grant he decided to solicit a blurb from me.

[Isn't it awesome that blurb is a real word?]

“In Chief Culture Officer, Grant McCracken highlights the increasing importance of cultural understanding for brands that wish to remain relevant—and profitable—in the protean flux of the modern marketplace, as he carves out a new role for the 21st century corporation.

The best marketers can hope for is to create something that resonates so strongly it becomes part of our cultural fabric. This book is an indispensable tool for achieving that goal.”

And I stand by it.

[Especially the bit about the protean flux of the modern marketplace - I liked that, despite the tautology.]

Grant's brilliant and he's pulled together some great ideas, frameworks and case studies - you should go read it - and then see if you don't want to become Chief Culture Officer.

[I may change my job title.]

Being a modern and social book it has a Ning to go along with it.

So - since I got a copy free in exchange for blurbing [real world status uncertain but definitely used] it only seems fair that I buy one for one of YOU.

So - in order to win a copy of Chief Culture Officer by Grant McCracken - please leave me a comment with a link to an interesting fragment of culture - the one I like most gets the book.

Deadline is, oh, say the end of the week.

Being Nice and Social

Whilst in London I took the opportunity to 'gatecrash' a Yuletide Tea with the IPA Socialites.

[Lovely it was too -high tea with scones and clotted cream and everything - and very nice to see everyone.]

This reminded me that I hadn't posted the collective fruits of our labors - what we came together to do - which was to continue the conversations of social type stuff beyond the static dead tree format of the IPA Social Media Futures report.

And so to that.

Some very nice smart people got together and had a think about this thing we currently call social media and how it might be approached by our industry.

Up top is a video version of Be Nice or Leave - my introduction to social engagement thing, that has been finding its way back into my inbox and onto the web a lot recently - and since I never posted it, I thought I would.

Here is a deck the Neil wrote which introduce the conversational sparks:

And here, for your reading pleasure, are the full length iterations

Robin then responded with some thoughts of his own about our advertising-centric approach and, of course, the perennial question of who is best placed to do what - which I append here as a relevant continuation of the conversation.

Feel free to comment - that's very much the idea.

Pop is Short for Popular 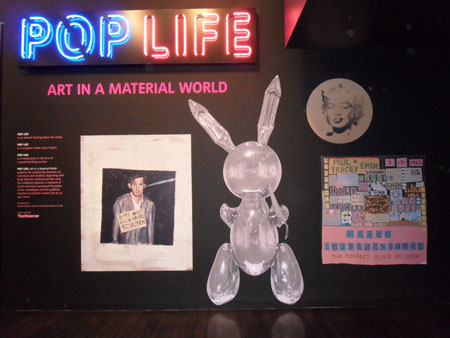 Whilst I was in London last week I popped into the the Tate Modern and experienced the awesome Pop Life exhibition.

It's dead good - and not just because some of the rooms are 18+ only [always a good sign].

[Dear FCC - this is an unsolicited endorsement. I just thought it was good. I bought a ticket and everything.]

One of my favorite pieces was created just for the show - a music video, shot by McG, conceived and styled by Murakami, starring Kirsten Dunst, for the song Turning Japanese [I think I'm turning Japanese] by The Vapors.

[It's not online yet but you can see some shots from it here - kawaii!]

There's some really interesting exegesis about Warhol and his approach to business as art.

Recently I got asked some questions about Warhol and so I did a bit of research so I wouldn't look too stupid.

He was a branding genius, he turned himself into a brand very consciously, decades before social media somehow got Julia Allison a role in a Sony TV commercial.

He wasn't doing this just to appease his childhood insecurities [although that was probably part of it].

It was because he approached art as a business:

Making money is art and working is art and good business is the best art. - A Warhol

In his book - The Philosophy of Andy Warhol - he makes the branding point even more explicitly.

He talks about being jealous of

'Levi and Strauss. I wish I could invent something like blue jeans. Something to be remembered for. Something mass.'

This i think is awesome - art not for the elite but for everyone - but also very commercially minded.

It's echoed in a quote from Posh Spice - who said she wanted to be 'as famous as persil' - as Bullmore pointed out ages ago. Packaged goods brands are more famous than any celebrity will ever be.

During the making of this art - which consists of idealised and very graphic images and sculptures of them having sex as a kind of postlapsarian Adam and Eve - they fell in love and got married and created a very compelling myth around the artworks.

Now - whilst Koons was famous in the 80s, after this he became really very famous indeed.

[There are few things guaranteed to create headlines around the world, but this has to come very close.]

And then he also happened to become the most expensive living artist in the world at auction.

All the POPular artists featured - especially Damien Hirst - understood that the value any work of art is entirely socially created - it only has value because we agree that it does.

Which means that the entire art industry is predicated on a very simple value equation:

People will pay more for something they have heard of.

Correspondingly, the more people have heard of the artist, and his work, the more it is worth.

So the business of art is fame, to become popular, to make itself famous, to create brands.

As you may have guessed, I think this mechanism underlies a lot of culture, and advertising and that.