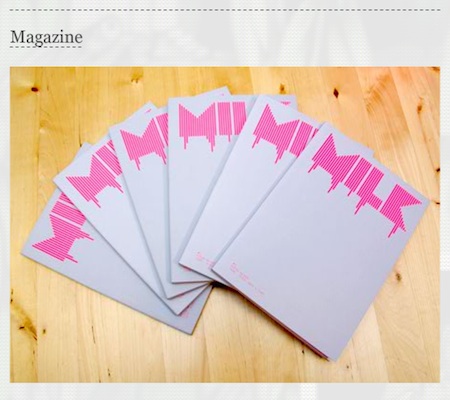 A nice person sent me some copies of MILK - a new "pre-digital concept printed thing", that might well have been considered a magazine, at least until recently, and is now probably a transmedia format [you can also read it online].

I punted in some thoughts about post-digital type thinking and Foursquare and that.

It's a lovely little thing of inspiration and culture.

One piece I especially enjoyed was an interview with Adam Morgan.

Adam wrote Eat the Big Fish and pretty much invented the notion of challenger brands - although he claims that the book didn't invent anything, it just made the techniques of creative thinkers "visible to everyone in te same way at the same time".

I had the pleasure of MEETing Adam Morgan on a barge a few years back.

He gave a brilliant seemingly unscripted talk without slides [which I always find impressive] and he is very, very smart.

Eat the Big Fish is getting a second edition, looking at some of the changes in his thinking of the last ten years since it was written, and one areas he is looking to explore is "opportunity".

"Do you know who invented the Cheeseburger?" asks Morgan. It was JWT in the 1930s, on behalf of Kraft slices who wanted to encourage the American population to increase their consumption of cheese slices.

JWT suggested that they attach them as an ingredient to the most popular meal in America - the hamburger. They created something out of nothing."

I love this story - the idea that an agency helped create a new usage occasion, a new reason to buy a product, and forever changed American culture - just by taking two existing things and putting them together.

Another reason I love this story is that it's almost certainly not true.

As far as Wikipedia knows, the Cheeseburger was invented in 1924 by a 16 year old fry cook called Lionel Sternberger [what are the odds?] at a sandwich shop in Pasadena, California.

I very much doubt that this was the first time anyone added cheese to a burger, but it's the first recorded, [and as we know nothing is real until it has been recorded] and it certainly predates the 1930s.

Assuming the Kraft/JWT story is at all true - I can find no evidence online, but that's not conclusive either way - what's way more likely is that some inspiring young Mad Man saw, heard or indeed ate a cheeseburger, stole the idea, and then, perhaps, the agency and the brand helped it spread.

No idea comes from nowhere.