Some Cool Things for the Clios from Faris Yakob on Vimeo.

Here are the cool things I spoke about at the Clio Awards, in a handy 7 minute film for your delectation.

Everything here is used without permission - if the permission is yours to give and this makes you sad, you can let me know and I will remove it and that.

Here are links to the cool things:

The World's Most Engaging Brands Are... 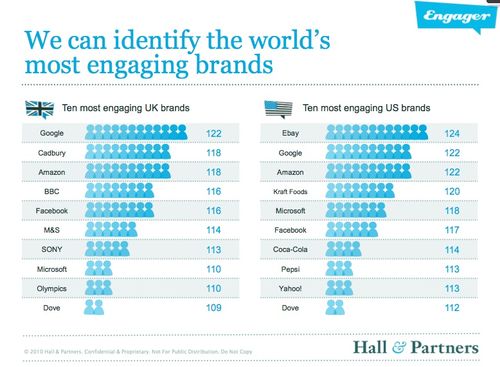 [Click for a bigger version for your decks and that]

Hall and Partners are rolling out their new Engager Brand Engagement Measurement model at a talk tonight that I'm also speaking at.

[The model uses, or at least alludes to, my transmedia planning thing a bit, which may, or may not, be why.]

[You'll be pleased to know I've done some digging and found out that the Engager font is...creampuff. You're welcome.]

One of the things I like about this model - [you can read about it in detail here] - is that it ties softer brand type intermediate measures to profit margins.

This is a good idea - it's baffling to me how often I see shifts in intermediate measures as business objectives.

[Business = money. Simple as that.

If if doesn't save, or make, money it's not a business objective.

Anything else is an intermediate measure, based on some assumed model of how some kind of process works....

like if more people email me maybe I will sell them more stuff, or if loads of people like the films we put on in between programs, and remember them and that, maybe they will buy more of my stuff later, or more frequently.

Or, at its most basic, if people have heard of my brand, maybe they will pay more for it.

But don't forget this is a model.

Ultimately, it depends on what you believe and how you then decide measure that.

The simplest ROI model - looking at say cost of production, media and fees for an advertising campaign for a CPG brand

- and then measuring the incremental sales attributable to that campaign, assuming some kind of Adstock like decay rate, using multivariate regression analysis to attempt to untangle solus effect of the advertising, is actually far from simple.

And it tends not to show wholly positive results in a lot of cases, especially with mature brands that have all the awareness they could possibly need.

But then you get things like intangible asset value and goodwill, which also have commercial value on balance sheets [but only when sold], and price elasticity of demand, both of which seem to be sensitive to mass media communications.

This is why I usually laugh when someone says to me - "but we can show that TV works!".

What I've loved historically about H&P's measurement is that the model for how this thing is supposed to work was always very clear.]

I think the event was invite only so if you are going you will probably already know - in which case do come say hi!

The geek in me cannot resist ending this with a slight move of my fingers, while I say: Engage!

You are Not an Eggshell

A couple of lovely people have brought the documentary Walking on Eggshells to my fractured,  deficited attention recently - and for good reason, as it is very much aligned with the ever evolving titular thesis of TIGS.

One of the awesome things about establishing an area of interest online is that eventually the tweets and links and emails and that begin to direct your attention to more of those kinds of things, thanks to fragments of effort from, well, you lot.

It's an analogue of something I said a while back, that, online, conversations ABOUT you eventually find their way TO you.

But it can also present a danger, a socially created version of confirmation bias, where you only ever see more of the stuff you already believe in, which is the kind of information you will tend to prefer to consume.

Fortunately, a healthy number of you take everything I say with a grain of salt, and so I've also received a number of recommendations to read Jaron Lanier You are Not a Gadget, which I just have.

I started out reading it as a grumpy skeptic, determined to disagree, as he bemoans the diminishing effect on music that MIDI has had, pointing out that since the late 90s there has been no new, generationally defining genre of music that anyone can identify.

Then he gets stuck in and tackles the end of authorship, suggesting we are all spiritually impoverished by the erosion of individuality that the technotopian believers in the HIVEMIND imply and that remix culture relies on, but destroys the business model of, mainstream media, which is why it seems to pull so much from pre-digital sources: it's a culture destroying its own seed stock.

Whilst I fundamentally believe that recombination is the route of all creativity, that doesn't mean I believe that all remixes are awesome - that would be an inductive fallacy.

So, today, seek out and read something you don't believe in, and remind yourself that your viewpoints are viewpoints, not absolute truths.

Trust me, you won't break.

But you may become a little less hardboiled. 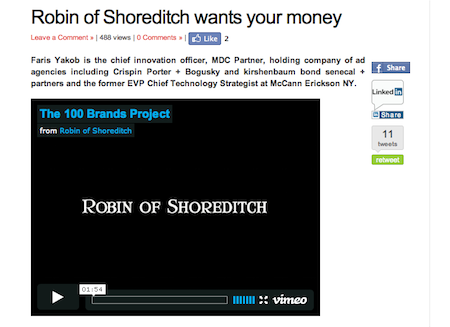 I wrote a piece for the Marketing Society about Robin of Shoreditch, focusing more on the lessons for digital marketing than my previous post.

It seemed appropriate since the campaign is aimed at marketers. 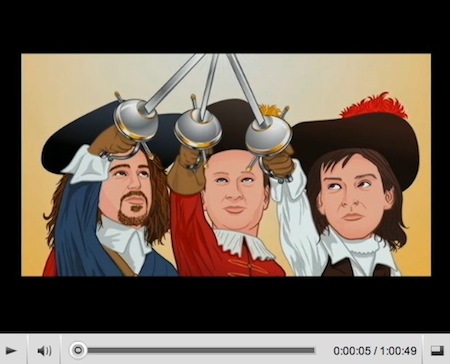 [The embed autoplays so I've dropped in a screengrab - watch here]

Alex Bogusky, Miles Nadal and myself had a lovely chat on Fearless Q&A last week, covering what MDC Partners has been up to, how we see things developing, and the need for [and challenges of being] a hybrid thinker. 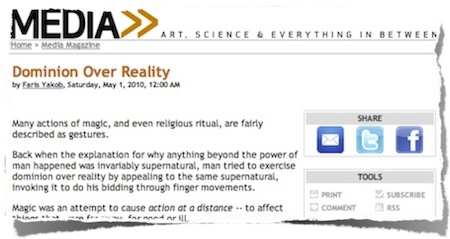 I wrote a piece about gestural interfaces for the current issue of Media Magazine, where I took magic as the starting point.

Magic, waving your fingers in the air to change the world, was an attempt to cause action at a distance - something a baby understands is impossible, it's one of the key cause and effect things we first learn.

It does find its way back to the future though, covering Skinput and Natal and affordances and changing the channel on your TV by waving at it, all of which are neat.

In an entirely different kind of gesture, I've been invited to be on the FearlessQ&A web show tomorrow [Thursday May 13th] with Alex Bogusky and Miles Nadal: 12pm MST, 2pm EST - you can watch it here and tweet questions and that.

Because information transmission in near real-time is also a way of causing action at a distance.

"April is the Cruellest Month...

...breeding. Lilacs out of the dead land, mixing."

But now that it's over, we can vote on our favorite post, over on Only Dead Fish.

The Digital Decaplet thing I wrote is in the running - but it's all great stuff, so do pop over, have a read, and click on whichever one tickles your fancy.

Give A Dog A Home 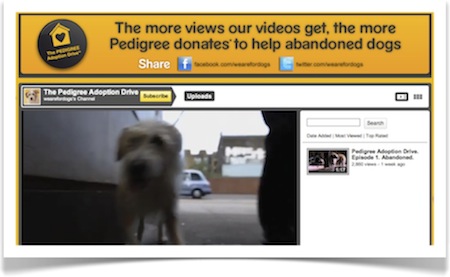 How much is that doggie in the window?

The one with the waggly tail?

The Pedigree Adoption Drive is raising money and awareness to help find home for the 100,000 plus abandoned dogs in the UK.

Charlie the Dog's own abandonment story can be followed on the Youtube channel - every 25,000 views, the next stage of his story gets revealed.

And for every view of the channel - Pedigree will donate 1 pound to help fund rescue centres that, well, rescue abandoned dogs and help them find a home.

So go and watch and then feel good as a hit of dopamine seeps through your cerebellum.

How much is that doggie in the window?

I do hope that doggie's for sale. 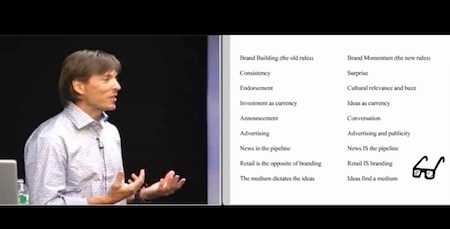 The New Rules of Marketing are There for the Breaking //

This talk by Alex Bogusky, from the Mirren New Business Conference, showcases the philosophy of breaking rules that Crispin adopted, alongside the new rules of marketing they began talking about more than a decade ago.

A lot of it will by now seem familiar - although it still isn't necessarily being adopted.

I especially like the idea of forgetting about consistency and going for surprise instead:

"You can have twelve different logos now - people will track with you."

[I suggested a long time ago that, if we accept that media is getting more sophisticated, which is making consumers smarter [see: Everything Bad is Good For You] and that media is no longer scarce, than simplicity is perhaps less useful and interesting than depth and richness.]

Here is a close up of Crispin's old NEW rules for marketing - we should already be trying to break them. 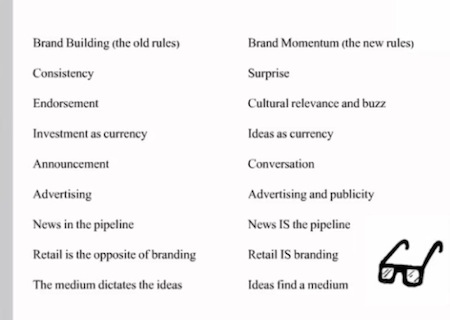 He goes on to address some of the new NEW rules we have today.

Are brands stories? Is narrative and myth the key metaphor?

Or - should a brand be thought of as a game?  Is that a more relevent metaphor for today's idea consumer?

Whatever is conventional wisdom is unlikely to be that interesting.

As Richard once said, perhaps being interesting is more important than being right.

The talk is only live on the site until Friday [May 7th 2010] so catch it while you can, ad fans.

[There are some lovely principles and anecdotes - like the Burger King pitch, where they presented for 3 hours before showing a TV spot, a reflection of how they were looking at the world]