How Technology is Changing Behavior [IPA] 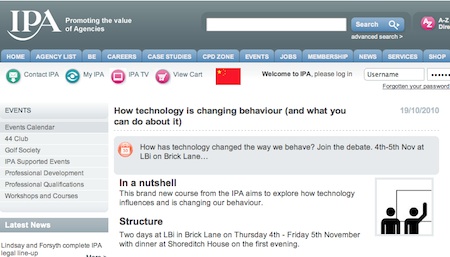 Technology is the biggest driver of behavioral change in culture.

Behavior is motivation filtered through opportunity.

And new technologies have, across the board, created new opportunities for people to DO things.

The IPA is running a course on November 4th and 5th that examines exactly that:

It features some very awesome people to learn from: the Herdmeister, Rory Sutherland, Simon Waldman [from LoveFilm], Neil Morris, Guy Hayward, Steve Hatch and Tom Bazeley to name only a few.

Even for technophile geeks [like me], its important to remember, as Henry Jenkins has pointed out, that our focus should not solely by on emerging technologies, but the emerging cultural practices that engender or allow.

For we are in the business of behavior.

Email chloe@ipa.co.uk for more information or to book your place.

[UPDATE: There's a good piece on Creativity that echoes some of the above, but much funnier, because Dave Bedwood from LMFM wrote it.]

[UPDATE: Adam from Naked Down Under has written some excellent thoughts about the primacy of action]

All Market Research is Wrong

Let's lay this oft discussed issue to rest, shall we?

I have long held and espoused the view that All Market Research is Wrong.

The idea of researching a market makes sense to anyone who is about to invest money into engaging with one, using products, services or communications.

However, the basic idea underlying all market research is epistemologically specious.

That is to say, it seems to make sense, but, under examination, it does not.

In essence, the foundation of market research is that, by asking lots of people questions, or asking a smaller group of people more in depth questions, we can gather dependable insights into why they buy what they buy, and whether or not they will buy something in the future, perhaps after having seen some advertising.

I don't believe this is true.

We make these [and most] decisions at a subconscious level, which means, by definition, the operations of the decision process are inaccessible to our conscious minds.

They will happily answer, erroneously, in a way that seems to make sense, as their minds create explanatory fictions to explain their own behavior to themselves, or the interviewer.

2. The gulf between claimed attitudes [and intentions] and actual behavior is vast.

- and recently a nice person called Hilary sent me a review copy of an excellent book called 'Consumer.ology' by Philip Graves that examines, in much more persuasive detail than my paper, the same issues.

I enjoyed it immensely.

[Although I am aware that this might be due in some aspect to confirmation bias since it re-inforces my existing views and I am possibly also affected by the fact I was sent it for free, which triggers certain kinds of feelings].

As lots of experimentally demonstrated behavioral economics shows us, attitudes are not a good indicator of behavior and framing, context and subliminal associations are hugely important drivers of choice, but we are unaware of such, and indeed that awareness of subliminal effects entirely negates their impact.

[This is ultimately why asking people if certain media or creative will affect their behavior is utterly pointless.

Forcing people to consider something rationally that operates on an unconscious, emotional level, is always going to give the wrong answer.

As Graves points out in the book:

Ironically, given that the consumer research the feeds it fails to take it into account, it could be argued that most marketing leverages the unconscious mind, and indeed it must to do in order to be effective.

In many consumer experiences it is either impractical or impossible to compare the array of products on offer.

To operate efficiently, consumers rely on their unconscious mind to make decisions.

There are lots of great anecdotes and examples in the book:

And yet - because tests are not the same as the real world and, therefore, do not predict what will happen in it - by 2006 the company had sold more than 3 billion cans.

[As Goldman famously said of Hollywood: Nobody Knows Anything]

Graves' point is, in essence, if you want to understand behavior, you must:

Market research is an $11bn industry in the USA but all the data it generates should be understood as wrong.

Now, that doesn't mean we should get rid of all of it.

It can be useful or interesting to understand what people think they think - a throw away comment from a focus group may inspire a brilliant idea - but the data it gives shouldn't be understood as 'true' - it needs to be interpreted - and we must supplement it with real behavioral data, from direct observation, or from the web - triangulating insights from as many sources as possible.

Ultimately, asking people questions is simply one way in which we attempt to create a model of the infinite complexities of human behavior.

And, ss George Box once said:

All models are wrong, but some are useful.

[UPDATE: There are lots of really well thought out points on both sides of this in the comments - I urge you to read them and thank you all for them. Clearly this is something people feel strongly about and debate is awesome.

The Herdmeister - Mark Earls - sent this link through with some of this thoughts.

Stefano also sent me a link to his excellent post about this, with some thoughts on how to make market research useful. I especially like this point:

Don’t care about what people say. Just like jazz, research is about the silences and the notes not played. A certain facial expression, a hesitation or a word not pronounced are more insightful than what people are willing to share.]

[UPDATE: Illya has posted an excellent commentary on this post, and hosted another excellent one.]

As I've mentioned before - I think humor is a largely under-leveraged resource in the communication tool kit of the serious, the public service, the charity, the cause related.

The aforementioned effects of expectancy violation are even more potent when applied to a category that tends to avoid humor, and sometimes it's important to use entertainment value to enter a topic into the cultural conversation.

That's why I'm especially pleased to bring the new #Malarious campaign from Malarianomore to your fragmented attention.

Comedy Fights Malaria shows that the disease is no laughing matter—every 45 seconds, a child in Africa dies from malaria—but humor can keep malaria in the spotlight and in the conversation. The result is always amusing, often absurd and sometimes downright bizarre messages from a broad range of stars.

Head over and 'like' for more goodness - and if you are able to spread the word, that would be lovely of you.

More on my love of robots.

This is a particularly fine example from my mates Neil and Ant which was recently exhibited at the V&A in London.

In city life, we are constantly surrounded by mobile phones that endlessly bleat for attention.

This installation takes these familiar, often stressful and annoying devices, and creates an alternate reality in which they pique people's curiosity, and make them want to use their phones in a playful manner.

It's about taking the worst of modern life - disposable unwanted phones and unwanted noises - and turning them into something beautiful.

The robot birds are made up mostly of mobiles phones and some Arduino boards.

You can call them, and they can call each other, triggering certain bird behavior.

Andy Warhol made five Paint by Numbers pieces where he painted partially filled in versions of real paint by numbers kits, challenging notions of the distinction between 'art' and 'reproductions'.

As I mentioned previously, I got very interested in Warhol after being asked to speak about him for a documentary on the BBC.

The nice people at Dare also seem to be interested, as they asked themselves: if Warhol was alive today....how would he use an iPad?

So they created this app that turns your iPhone into a palette and the iPad into the canvas.

And then made this homage to the 1982 video where Warhol eats a hamburger to promote it.

There are definitely lots of interesting things you can do when thinking about devices together - not as lots of different screens to show the same thing, but as different interoperating parts of a system.

Here’s how it works..

Excellent fun, personalized and very low latency response stuff - tweet and it's chosen and sung back to you in a few hours.

It's also interesting , to me, that you can take enter this promotion without visiting the website - identity is distributed, so are ideas. 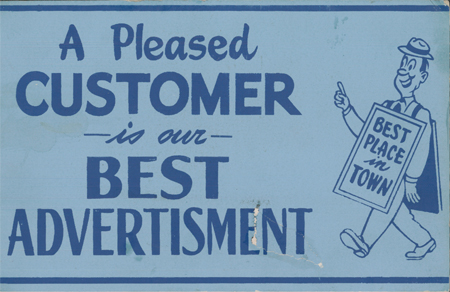 This is as true today as when this gloriously awesome sign was originally printed.

[O.K. there are no gradations of true, there is just true and not true. I know.]

Actually it probably wasn't true when this was written - simply due the the practical limits of spread of the endorsement.

Although, maybe it was true if this was written for a small town before broadcast media, where everyone in town equals less than Dunbar's 150, and you could tell everyone about your super-satisfied experience.

Only deviation triggers expectancy violation, either positive or negative, so you need to deliver more than expected.

Only SUPERSATISFACTION creates advocacy and positive word of tweet.

Any significant dissatisfaction will create a strong desire send out angry tweets, or videos, or posts.

{UPDATE: looks like startup GRI.PE is looking to facilitate and capitalize on this}

This is because expectancy violation causes arousal, which triggers memory formation and a desire to act.

Lots of memorable advertising, such as things that are humor, or surprise, probably work in the same way.]

Then it became less [or, indeed, not] true, when things like television advertisements were probably the best advertisements, simply because the reach advantage the had over unassisted promotion from individual customers.

But now it is way more true [or just true] - since theoretically a pleased customer could tell loads of people, relatively easy, assuming they were into social sharing and had been for a while, and would be perceived as unbiased endorsement, so would probably be the best advertisement.

Although, it might not be considered an 'advertisement' as it hadn't been solicited by the client, if you asked the FCC.

"That's true for ads as well. An advertiser can produce the best creative ad in the world, but knowing your friends really love drinking Coke is the best endorsement for Coke you can possibly get."

I guess it depends on what you mean by "best" and "advertisement".

If an advertisement is best but no one sees it, does it make a sale/increase price elasticity of demand?