It's great getting a chance to get Chris Anderson [The Wired one, not the TED one] to talk about the future.

Especially in the name of work.

His point is mostly about how bad we are predicting anything well.

Not just because of timeframes.

But also because we are massively biased by the poles of presentism and novelty.

As in, we tend to extrapolate in a very linear fashion from the concerns of today.

We find it hard to articulate novel things until they become, well, less novel.

Ask Babbage about how convincing his ideas for a difference engine were before anyone could conceive of how to create one.

Yet we also tend to believe that somehow, things will be fundamentally different.

Y'know, with the hoverboards.

And where all the movies are 3D.] 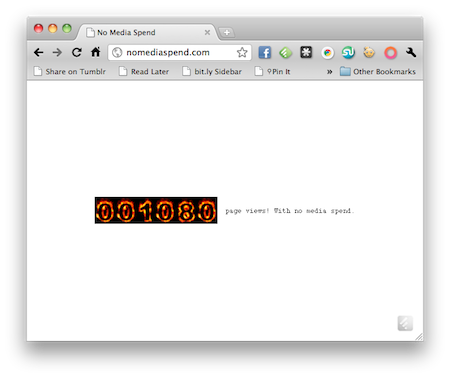 Advertising, ever slightly ashamed, has of late decided that the ultimate measure of intermediate efficacy is earned attention in the form of interactions garnered with NO MEDIA SPEND.

Now, don't get me wrong, earning attention is definitely a GOOD THING.

But having a media budget isn't a bad thing.

And not having one isn't necessarily bad either.

But the scene in the case study video where you show all the blogs covering the work and then say with No Media Spend has lept straight into cliche.

So OneShow juror Max put this simple site together as a comment on such. Mini put together this iPhone enabled 'capture the flag' contest in Stockholm, Sweden.

You download the app and then can find and capture a virtual mini.

The app shows you the location of the Mini and all the players.

If someone gets within 50 meters of you - they can capture the min. Last man standing when the clocks runs out - wins a real Mini.

Nissan put this banner together in Dubai that geortargets you, and then lets you book a test drive, and have the car delivered to you, from within the banner. 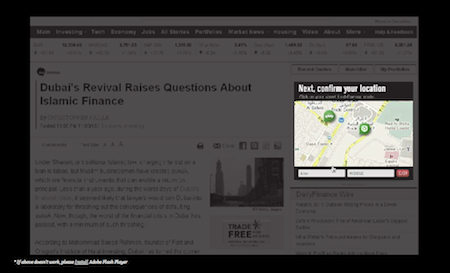 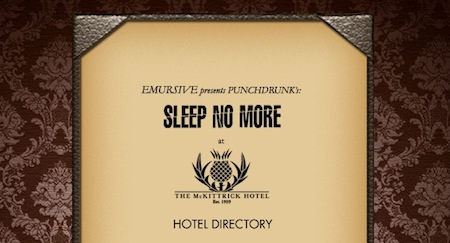 My mate Katie invited me to the dress rehersal of Punchdrunk's first NYC show: Sleep No More on Saturday.

It was completely awesome.

If you are in or near NYC, you should go.

If you are lucky enough to have been to a Punchdrunk show before - this is the biggest and best I've seen, and I've seen a few.

If you are lucky enough to have never been to a Punchdrunk show before - goodness me you are in for a treat.

Imagine if a play was turned inside out.

It became an immersive adventure splayed out across a 6 story, beautifully detailed, building, that you explore at your leisure, every member of what we used to call the audience having a different experience, as they stumble across dramatic fragments and piece together what used to be called the plot.

You can - and if you are in NYC you really should - get tickets here.

[Tip: Look out for the candy room - you can grab a handful.] 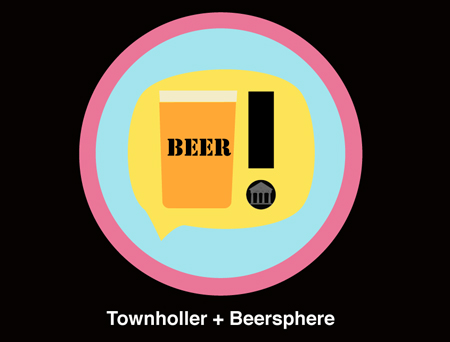 It's that time of year again, when the freaks and geeks converge on a town in Texas to hatch Evil Plans

[see you there Hugh]

And for fun. Among friends. From all over.

Which is nice, isn't it?

So with excitment I can confirm that BeerSphere returns to SXSWi for its 3rd annual previously aperiodic but now apparently annual get together of like minded nice people who drink.

As last year, we have once again joined forces with the lovely boys of TownHoller, and so is brought to you in proud association with:

And we are hoping to have special magical object guests as well.

Goodness me we do spoil you. Like the ambassador.