What is #TV, Anyway?

I saw a a tweet this morning about #hashtags being rolled out on screen across television shows, which reminded me of this little film and decklet I threw together a while back.

The basic point I attempt to beat to death is that, as we've discussed before, media is one system now, which allows us to reverse the polarity, and that media definitions are assemblages of things, or, to put it another way, 'TV' may not be what we think it is, and even if it was, it probably isn't anymore.

And how there are lots of different viewpoints as to what constitutes the right consumption experience - see what David Lynch says in the video about watching movies on your internetphone - and where the boundaries lie, but that in general 'TV' benefits greatly from backchannels, extensions and participation.

[No I don't have permission to use any of these pieces of film.

If you have the power to give that permission, and this makes you sad, let me know.

Of course, that's also part of the point. Y'know? With Youtube and TV being part of one system and that.]

So, like, there are going to be lots of #hashtags# on #TV from now on.

Today we are very pleased to launch BMW EVolve: a system that lets you track and record your driving habits to help every driver understand if an Electric Vehicle is right for their needs and to help BMW evolve their vision the future of mobility.

The application - live now in the App store for iPhone, available on Android soon - lets you easily track and analyze your driving patterns, and see if you are a good candidate for an EV, based on distance and charging locations and that.

The application was developed with insight and input from the pioneers who have been driving the Mini-E electric vehicles for almost two years. It also features tips sourced directly from them.

Connect the App to the EV Dashboard on BMWActivatethefuture.com [where those documentaries live] and see what impact driving an EV would have for your life and the world, comparing your data to national averages.

Different behaviors earn you different badges, as you learn more about how you drive and what the impact of an EV would be.

And the collective engineering data the it creates will be used to continue to develop the next generation of BMW Electric Vehicles.

In a not entirely coincidental piece of news, the BMW ActiveE, their first electric vehicle, was formally announced this morning. 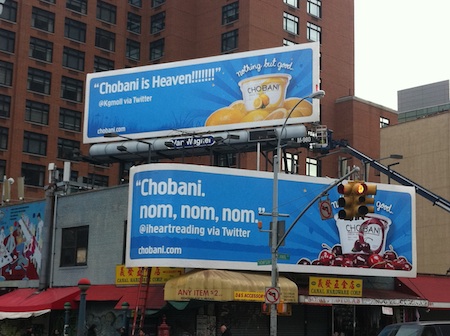 For the less geeky among you, 'reversing the polarity' is a deus ex machina device commonly deployed in Star Trek, Doctor Who and other sci-fi, especially where forcefields and advanced energy drives are common.

It's the last minute solution that always solves problems - because, for some reason, future technology works better when you route the flow through it backwards.

For a while now we've

been talking about low latency advertising - work that responds to actions in one part of the media system in other parts of that system, in approaching real time.

I wrote a report thing for Canvas8 called Media is One System about this - the [especially digital] mediascape is a single system of inter-operating elements.

Since then, well, Kraft turned a tweet into a TV spot in a day.

It's not just the speed - the low latency aspect that's interesting.

In Jon Steel's excellent book Truth, Lies and Advertising, he relates the tale of Goodby's campaign for Chevy's Mexican restaurants.

They had a line "Fresh Mex" that GS&P brought to life by shooting ads and getting them on air the same day.

It's the aspiration through using, doing things with, real people power of endorsement thing.

Tweets are appearing in ads all over the place.

Which is part of what I mean by reversing the polarity.

Informing broadcast with social, rather than looking at the social activation of broadcast.

Increasingly, I suspect, broadcast will be used to reflect what is happening in other parts of the media system.

because people believe other people [endorsement]

because the system allows it, and what can be done, should be tried [experimentation]

because, like social tv, it brings salience and real-time relevance to a timeshifted, fragmented medium [cut-through]

because it reflects how people are consuming media, watching tv and being online at the same time, tweeting and that [media design]

because, as I've said before, the new model of marketing is to do stuff FOR people and then tell everyone else about it with advertising [solutions, not propositions]

Which is the other part of what I mean by reversing the polarity.

Advertising used to tell you how brands could solve your problems.

Now it solves problems and tells you about it, because everyone gets how products work.