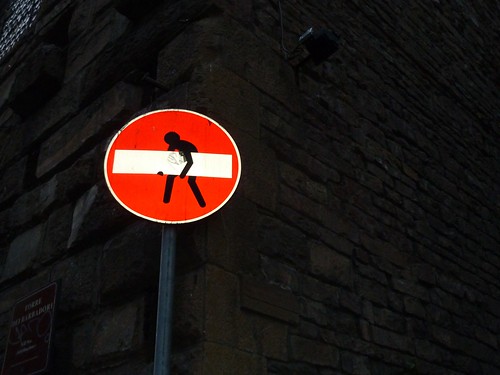 So while I was wandering around Florence I kept noticing these very awesome street sign interventions. 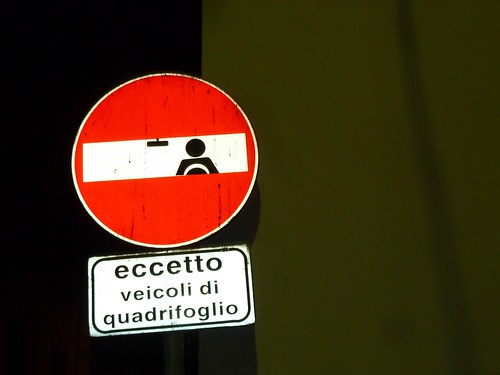 I love signs and loved how the artist was incorporating, building on, the canvases he had chosen.

By chance, we happened upon the artist's studio, and saw some of his art, inspired by his street sign stuff, and had a brief, pleasant chat. 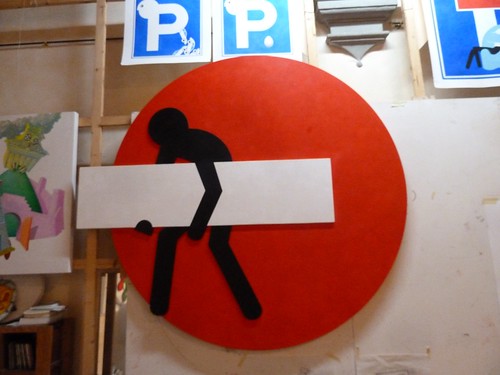 His name is CLET Abraham and he is French, but has been living in Italy for 20 years. 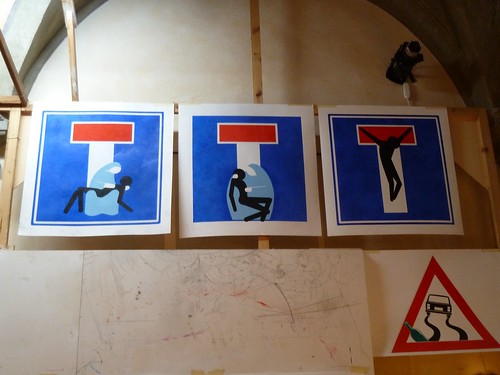 Which was very awesome. 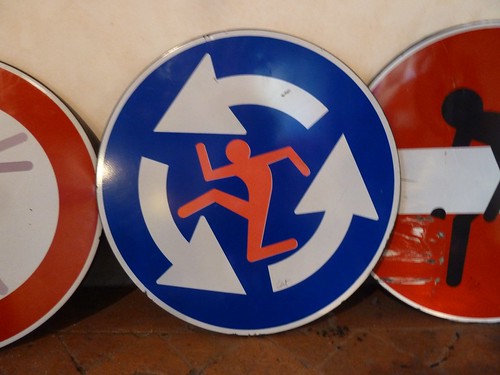 [UPDATE: my mate Enrico found this video of Clet's signs]

So I googled him, and found this interview where he explains that all his work on the street signs uses removable stickers and are a reflection on 'common visual space':

As a professional in the world of visual space, I feel called to intervene, both to notify the public of the absurdity of the situation, and to propose a constructive and respectful alternative.

My adhesives are developed to add a further level of reading [to street signs] constructed on the base of their original signification in order to maintain its utility but give it some intellectual, spiritual, or simply amusing interest.

Utility with intellectual, spiritual, or simply amusing interest - that sounds like a brand behavior I can get behind, I thought.

Which was funny, because then I read Gareth's Post on Thinking and Making Small and saw he agreed:

2.  Be useful, interesting, entertaining and playful in the service of people

Preferably all four of the above, at least three.

Technology is Stuff That Doesn't Work Yet

Stuff That Doesn't Work Yet from Faris Yakob
Early last year I was giving this talk a lot.

It's about what we mean by technology, and how it is changing the nature of media, and hence advertising, and some strategic responses to the change in the media environment.

The quote concerns the modern semantic halo of the word technology - it means anything we don't yet understand how to use, what to do with.

It hinges on the triumverate of laws that are the drivers of exponential change in our world: Moore's Law, Kryder's Law, and Guilder's Law.

And exponential change is super weird - it's not a feature of any older technologies, only post silicon/digital ones. Older, mechanical, technologies evolve incrementally.

[Imagine if cars got twice as fast and half as expensive every 18 months.]

As the graphs in the deck shows, processing, memory, and bandwidth are well on their way to approaching a marginal cost of zero.

When things are free[ish] they rapidly become ubiquitous, and as Shirky says, abundance breaks more things than scarcity.

The printing press was an incredibly important technology, but only when everyone could read did the world change.

So what happens when media/content is infinite? When every reader is a writer?

I have no idea, but in the interim I posited some thoughts about content creation for brands that adapt to the existing media environment.

3. Principe of Utility - Do Stuff that Earns its Own Attention

4. Principle of Interactivity - Do Stuff That Gives People A Role

And it touches on the ideas that technology is a medium, and that every new channel changes the whole system.

When I wrote about alacrity and ubiquity - I meant things like the Old Spice Response campaign: more stuff that responds faster. [I just didn't know that I meant that at the time.]

I noticed that Grant posted something in memoriam of the 10th anniversay of Douglas Adams' death, which quoted the article from 1999 that I was pulling from, so it seemed appropriate to post this.

I was thinking of going back in and updating the references but decided against it.

Whatever minutely prescient elements exist within the slides will remain fixed in the amber of keynote.

Just as no one preaches like the converted, no one laughs as hard as the satirized.
Or something.
This lampooning of the social strategy presentation, followed by Stewart Lee's incisive anaylsis of the the diminshed shared nature of television
[one that is, perhaps 'ironically'
{FYI the rapper, Ironik, in his annecdote is real and was indeed stabbed
(in the buttocks)
and robbed after Tweeting that he had just bought some jewelry}
being brought back to life by the ad hoc networks created around television shows via hashtags and the like]
should make for chucklesome viewing for those of you who ply the trade.