This is probably why I enjoyed this spot.

But I especially like the fact that there is an extended version on the 'tube.

Shouldn't all ads do that?

Not the lasers bit.

Media space isn't scarce online - so the issues of fitting everything into 30 or 15 seconds simply don't apply.

If I go to the effort of looking your ad up - actively reaching towards the brand in response to broadcast advertising - shouldn't there be some additional reward?

Doesn't necessarily need to be extended film [with lasers] but something that connects the passive [I saw an ad] to the active [I looked you up] experience in a satisfying way, and rewards the active piece.

Although, if there is a fast food chain where robots make the burgers, I would like to eat there.

A while back my mate Jake sent me this deck he had whipped up - and jolly good it is too.

It syncs up nicely with my last few posts about proximity and context and that - and contains lots of facts to chew on and ideas to mull over, mapping out our increasingly mobile, POST PC future.

A long, long time ago I wrote a thing about the future and ideas and advertising and that called I Believe the Children Are Our Future.

Whilst phrased as an ironic tautology [and Whitney Houston reference], it also attempted to point out that each generation has distinct media behaviors and expecations, and those behaviors and expectations will dictate the actions of the advertising/media/technology industry in the future.

Or they should, anyway. In some ways.

It also spent some time worrying about problems of prospection - the difficulties we have predicting things that are novel, due to the biases like presentism and anchoring and so on.

Then, later, I began wondering a lot about how the rampant acceleration of change brought about by the stability of Moore's Law was disrupting the mediascape and therefore advertising landscape in Stuff that Doesn't Work Yet, where I touch on the idea that technology isn't technology if you grow up with it - it's just stuff.

All of which meant I was quite pleased when someone nice called Renee sent me a new research report from Latitude that looks at what kids predict the future of technology will be.

[A complete study summary (PDF) is available for download at http://bit.ly/kidstechstudy.]

It has some nice insights about how internalized the idea of technology has become - in some ways it feels like technology itself, as an idea, has become just stuff to the next generation.

They intuitively feel that online and offline are the same, that computers should be more human [in some aspects] and that technology is empowerment, and is ultimately, invisible. 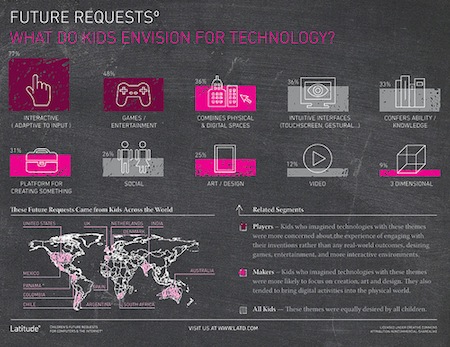