Summer is flying by us like a warm breeze stimulating windchimes into noisy ecstasy and I find myself somewhat uninspired to blog, to be honest.

The Romans called these the Dog Days, marked by 'dull lack of progress'.

One should never admit such things I imagine, but I'm usually of the mentality that being frank and honest saves time and spirit and I've never been one to try and force things out.

[I can be honest with you, right?]

Of course, it being summer, people are supposed to be out and about more anyway, consuming less screenmedia and embracing more people and concepts and like IRL, which is well and good and sweaty and delicious.

Back when TV was solus screenmedia and we lived by an immutable schedule, dictated to us from the networks, summer was, and mostly remains, the season of the living dead, where re-runs rule the air.

So I thought this might be a good time to try out something I've been mulling over for a while.

To whit, I've been blogging about brands, media, communications, technology and that incessantly for quite a few years now.

Approaching a decade, if you include earlier incarnations of TIGS on older platforms.

And, I imagine, most [or any] people reading this now, haven't been reading TIGS since day one, which means there may be stuff deep within the repository that's potentially of interest.

Of late, there has been an acceptance that there is a superfluity of content.

The mediascape is functionally infinite, and you can't keep up with anything, or even some stuff.

So people like my very smart friend Noah have been creating companies and products, like Percolate, to help filter the stream for salience.

Surfacing the serediptious is as valuable, or more valuable in some senses, then simply creating more content, it could be argued.

And, because blogging and writing and any kind of creating I guess, has to make both you and the 'audience' happy, or you won't keep doing it, I was also wondering what I might glean from looking back at some older pieces of polemic, and seeing if I still agreed with myself, or if things had changed.

In general, once you've worked out what you believe, you then need to keep checking with yourself and the world to see if you still agree.

The thing about being rational and that is that, when faced with evidence that refutes your belief, you are obliged to change your belief.

It's what makes science a belief system rather than a system of beliefs, if you see what I mean.

You are only as young as the last time you changed your mind.

[In case you were wondering, this is why I put the animated film of the Tim Minchin beat poem STORM up at the top.

It's about that kind of thing and I find it very inspiring and that and thought you might like it.

All of which is a long way of saying that

a] maybe the best way to stop being uninspired to just start, so maybe I'm wrong about trying to force things out

b] Next week I shall attempt to package up some re-runs of TIGS, featuring some of my favorite episodes, possibly with the director's commentary and anachronistic DVD extras.

Unless something else happens that changes my mind.

Or you, gentle reader ask me not to, or tutu. 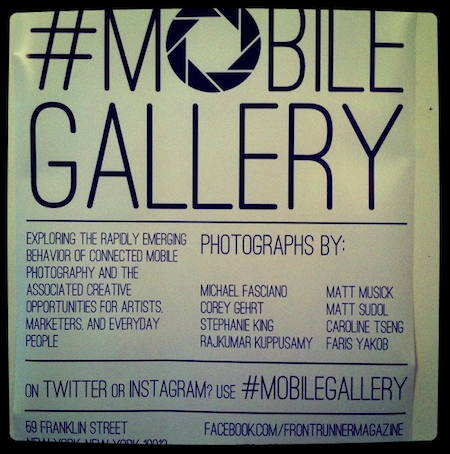 We quietly launched the #mobilegallery last night to friends and family.

[by WE I mean the smart lovely people that are listed above who aren't me - they did everything.]

In celebration of the awesomeness of Instagram, and to take that social stream back into the real world, with real prints, in frames.

And people and drinking IRL and that.

At the excellent FRONTRUNNER gallery in New York's trendy SoHo.

You can browse some of the pictures currently aggregated to the #MobileGallery Instagram hashtag via Web.stgram

And some photos of the event here

Next time you will all get the chance to be involved. Details and a Call for Submissions to follow.

It will be awesome.