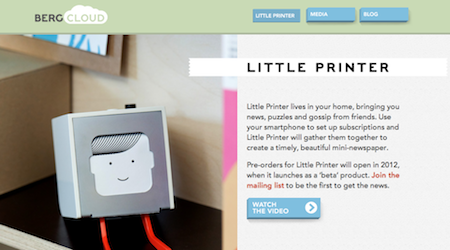 There are a couple of mega trends that have been forming for some time now.

[UPDATE: Tom sent me a link to this Kickstarter project for a new kind of 3D printer called PrintrBOT.

which reminded me of my two previous posts on 3d printers

BergLondon have just announced  a new combination of the two:

[remember – ideas are new combinations - http://farisyakob.typepad.com/blog/2008/07/ideas-are-new-combinations.html among others]

{BergLondon is a charming prototyping and invention shop in London that works with agencies and clients to concept future things.}

It has just announced the Little Printer – an aggregator/ curator that prints you out a personal daily newspaper:

Connected to the Web, Little Printer has wide range of sources available to check on your behalf. We call them “publications”.

Right on time Little Printer gathers everything it needs to prepare a neat little personalised package, printed as soon as you press the button.

You can get deliveries multiple times a day, but we find once or twice works best–like your very own morning or evening newspaper. 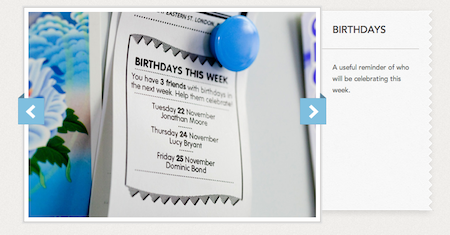 Graphic design is at the heart of everything Little Printer delivers, making the most of connectivity and print combined. Rendered in crisp black and white these tactile publications take visual cues from traditional halftone lithography and modern pixel art, whether they’re the latest international news or this week’s gossip from friends.

The fusion of technology, design, content distribution and 3D fabrication is an obvious innovation nexus to keep an eye on.

The Importance of Being Awesome

is the name of the talk I gave at the Mashable Media Summit.

It's about how important being awesome is and will be, for media products

[although I'm leaning into a specific, slightly archaic use of the word, when it meant something more akin to terrible

which, itself, meant something a bit different].

They've just posted it and said:

In order to capture the audience’s attention after lunch at the Mashable Media Summit, Faris Yakob, chief innovation officer of MDC Partners’ kbs+p and founding partner of Spies & Assassins, had to be awesome. Yakob is trying to do so at the intersection of technology, business, behavior and culture.

The future, according to Yakob, “belongs to the most awesome because we are in a stage of transition, where human interpersonal networks are going to substitute or supplement commercial broadcast networks.”

From art and copy to arduinos and code, Yakob talks about how and why the most shared and spreadable content in media wins. 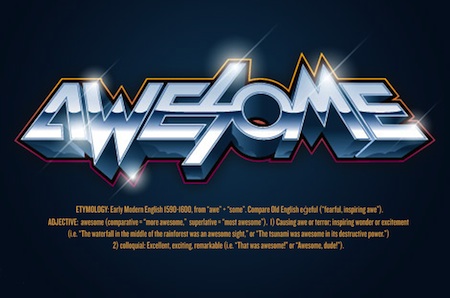 Ideas Having Sex Live ON Stage 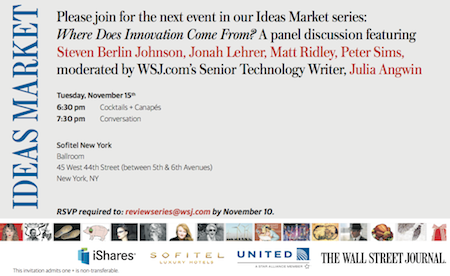 and his fellow panelists were 3 of my favorite writers - in fact all three of them featured in my Ex Libris article a couple of post down.

@StevenBJohnson: author of seminal "Everything Bad is Good For You" and "Where Good Ideas Come From".

@MattWRidley: author of equally seminal "Genome: The Autobiography of a Species in 23 Chapters", "The Red Queen" and, more recently, "The Rational Optimist".

@JonahLeher: author of "How We Decide"

All of which have studied creativity and innovation in different ways.

In essence, all of them espouse a recombinant view of creativity - ideas are new combinations.

This is why ideas evolve covergently across the globe - certain pre-conditions have to exist [such as intermediate technologies] for ideas to come about.

This is why Ridley says that "Ideas have Sex" and that the key driver of innovation is open exchange - trading, commerce, intermingling.

Johnson points out that all "ideas are works of bricolage".

Lehrer pointed out that cities are drivers of innovation for the same reason - lots of diverse ideas and people are randomly intermingling - Jane Jacob's classic idea.

He also made the point, recently referenced by Seth, that cities don't die but corporations do - the average life span of a Fortune100 company is 42 years.

Leher posits this is because as companies grow innovation per capita drops, whereas it doesn't in cities.

He went on to talk about the defining characteristics of success:

2. Picking the right goals to move persisently toward.

[See his Wired piece here on that]

Peter pointed to the process that Pixar calls "plussing" - getting everyone to share their ideas and progress daily and then letting anyone build on them, or suggest a different direction, using the key improv tenet of 'Yes, And" - which is a way to handle criticism of ideas that doesn't shut people down using negativity.

[Take the idea, agree, and then build]

Their final tips on innovation:

@StevenBJohnson: Expand and diversify your social network - the more, different, non-adjacent to your own knowledge, ideas you come into contact with, the more interesting your ideas can be.

@MattWRidley: Be Open to Exchange - trade ideas, swap stories, look for ways and places to exchange.

This requires a little explanation.

All models of creativity incorporate this 'long shower' - a moment of relaxation where you are not actively thinking about the problem, indicated by increased alpha wave activity, where the EUREKA moment manifests.

In essence, in order to facilitate non-obvious connections within the 'adjacent possible' [within the viable solution space]

You put your mind against the problem hard for a while, fill it with everything that might be useful, and then take some time to relax, to NOT think about it, to allow ideas to recombine and thus geminate.

Long showers are often reported to be the locus of insight - also see long walks, or anything else you find relaxing that is not working on the problem.

@PeterSims: Abandom the endless quest for the sasquatch of big ideas, and focus on placing lots of little bets.

Not Valid Unless Signed

Te dx technologies of identity
View more presentations from Faris Yakob.
So I did a little talk at TEDx Silicon Alley.

As is usually the case nowadays, we were asked to talk about technology and creativity and that.

The specific brief was unexpected uses of technology.

As I suspected people were mostly talking about widgets and API and so on - all of which is groovy but I wanted to be non-obvious.

So, riffing on a point I've made before, I point out the most important human technology is writing. 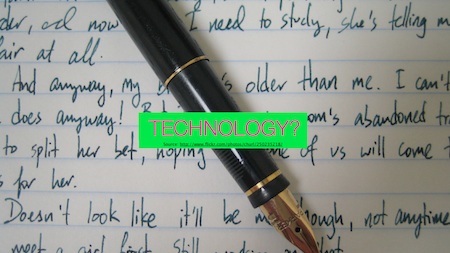 It's the only truly pervasive technology - the only one we use inside the operation of our own minds to help us thing, which is a staggering idea.

[For a while I thought we thought only in words, but now I don't.

That school of thought is called Linguistic Determinism.

However it's not entirely true, I don't think, since we do think without articulation, but we find it difficult to articulate those thoughts, for very obvious reasons.

Feelings, for examples, are clearly a kind of thought that doesn't articulate itself linguistically as we experience it.]

[this is a cultural form of Covergent Evolution]

but definitely in ancient Mesopotamia

[which means 'between two rivers' and is a toponym for the area of the world between the rivers Tigres and Euphrates, mostly in modern day Iraq, which was the true cradle of modern civilisation, lest we forget]

This form of writing was very simple: marks in clay tablets, known as Cuneiform.

Based on the records we have, it seems likely that it was invented for inventory management - to know how much stuff people had, for trade and taxation purposes.

As soon as it was invented, it created a new problem, the solution to which was the very first unexpected usage of technology.

To whit, they created clay databases, and as soon as you have data you need to be able to authenticate it.

And so signatures were invented. 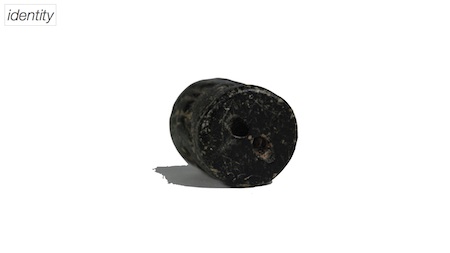 Signatures were an identity technology that authenticated the writing - originally they looked like the seal thing above - they were rolled into the clay to create a unique pattern.

They rapidly evolved into: 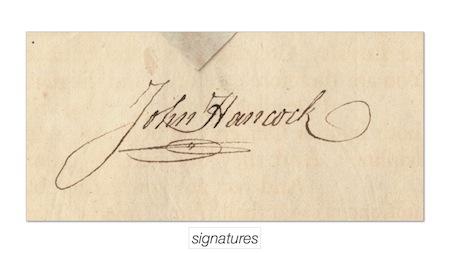 And, 5 and half thousand years later, they are still essentially the same.

It should be understood however that a signature is not the same thing as an autograph.

[The word autograph originally meant anthing written [graph] entirely in your own hand [auto] - but now refers to an artistic interpretation of your signature that does not have the same legal status. 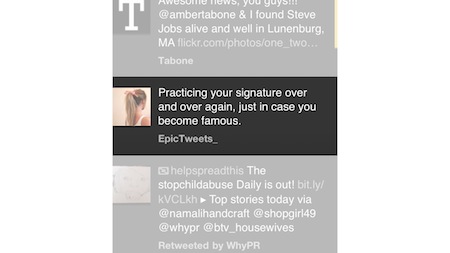 Because, your signature has a legal status.

Your credit card is NOT VALID UNLESS SIGNED. 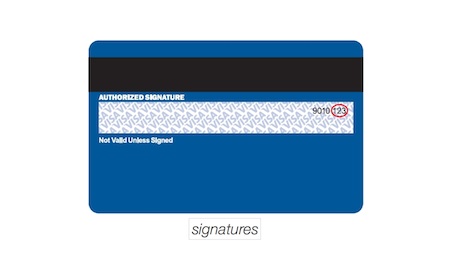 In fact, according to a retailer's deal with credit card companies, they are NOT ALLOWED to ask for any other form of ID - because: 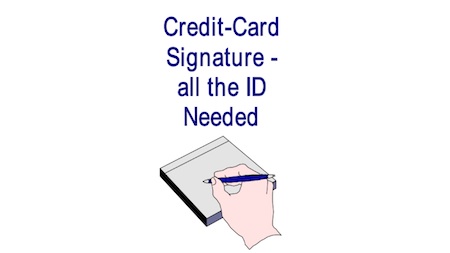 Your signature the only form of ID you need - it is a legal form of ID and an anti-fraud mechanism, because signatures are highly stylised and hard to copy.

When I moved to the USA, I noticed something found really odd: they ALWAYS give you your card back before you sign.

In Europe, you sign, they compare your signature to the one of your card to see if it matches.

[Now, I realized algorithims are also helping to prevent fraud based on behavioral profiling.]

Which led me to start the Signature Project.

In essence I sign my credit card slips with different names, or pictures, or whatever, take a picture, and post it to a Tumblr, to highlight this cultural anachromism. 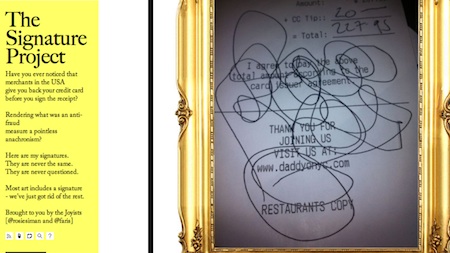 Sometimes I write what I was buying: 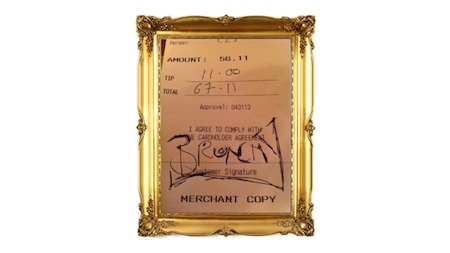 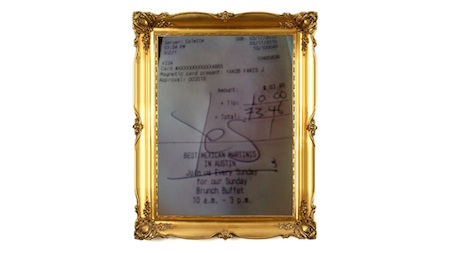 You get the idea. You can see lots of them on the site.

Then I talk about identity, about the idea that it's contextually fluid and digitally distributed.

But that, increasingly, your signature is being functionally replaced on the web by your Facebook Connect login - Facebook is an identity broker. 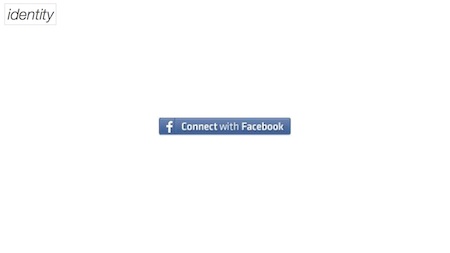 And that it brings all your friends along with you as the social graph. 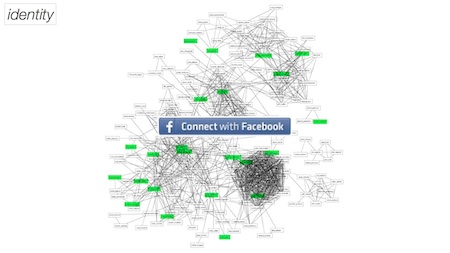 Upon which graph, you are a node [in Facebook's conception] - but what struck me is how like a fingerprint it looks.

Unlike a fingerprint its dynamic, but it is always completely unique.

Then I started talking about how the internet is allowing us to tap into deployed capital surplus by enabling frictionless informations and transactions.

To whit, we've been renting out our living room on Airbandb - an entirely unexpected use of the internet. 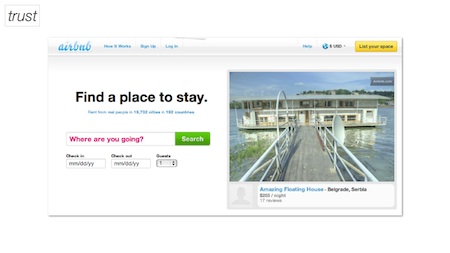 But that this use itself created a subsequent identity problem, just like writing, except this is one of trust.

How can I come to trust a complete stranger and feel comfortable letting them into my home, especially when I'm not there?

But your networked identity provides a solution.

Because on Facebook I can see who you are in totality - across all your friends - and on Linkedin I can see where you work - I'm comfortable enough in your network to trust you. 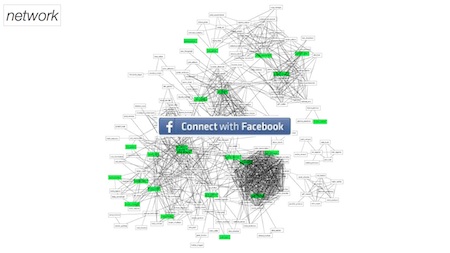 So we did it and had some very lovely guests to stay and pay.

And, unexpectedly, one of them even sent us a thank you note, in the mail and everything. 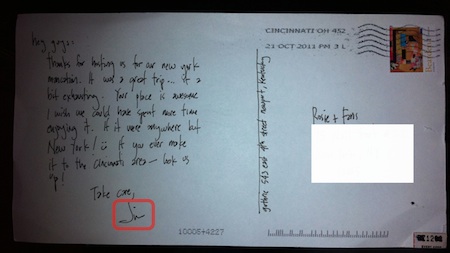 Signed at the bottom, to authenticate it, because a postcard, like a credit card, is not valid unless signed.

And then I said thanks. 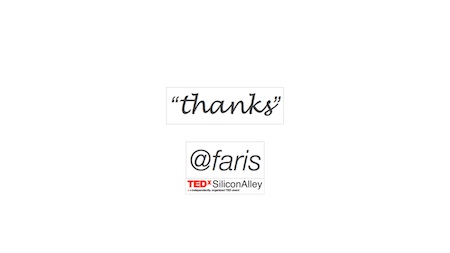