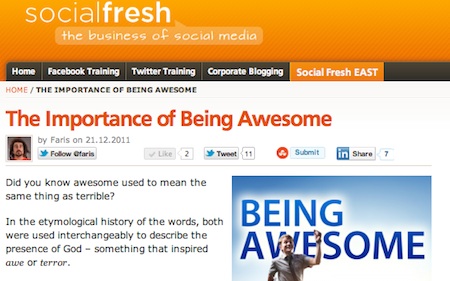 My mate Jason runs the excellent and very useful Socialfresh.com and I just wrote this thing for them.

I originally thought I was just going to transcribe The Importance of Being Awesome Mashable talk, but as I wrote it became slightly different, focused more specifically on the nature of awesomeness, in content sharing terms.

I especially like the line from Dr Berger [the scientist who did the study that showed that awesomeness was the biggest driver of sharing from NYTimes.com] that unpacks awesomeness, partially, as disrupted expectations about the world -

- and highlights the inherent relationship between emotion and communication:

"Emotion in general leads to transmission"

which is a rather lovely thought to leave you with for the festive season.

So - [after you've been over to SocialFresh to read the whole piece, of course] go have some emotions and tell people about them.

The Taste of Branding 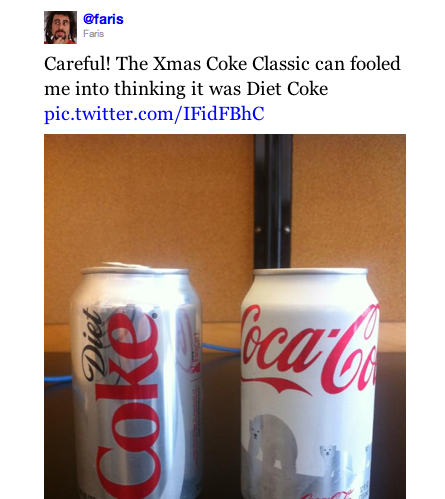 I tweeted this a week or 2 ago and a bunch of people responded on Twitter saying that it had happened to them.

And then Coca-Cola decided to pull the cans citing consumer confusion and that.

All well and good in the age of very low latency consumer feedback, especially about iconic packaging.

But I didn't notice, until my mate Matt pinged it to me, that part of the consumer issue with the cans was not that they were confusing it with Diet Coke but that COKE CLASSIC TASTED DIFFERENT IN WHITE CANS.

This WSJ article mentions it in passing, The Atlantic calls it out a little more:

Coke officials deny tweaking the taste, and say they only changed the can.

But, see, it's not that consumers are confused in this scenario, rather that the understanding of what 'taste' actually is, is - because when you change the can too much, you change the taste.

Taste happens in the mind, so it's more complex than just chemicals - it happens at the intersection of lots of different things, including of course the chemicals and your tongue, but also including less obvious things, like expectation [you will love this] and concepts of value [this wine is very expensive] and where you are [anchoring/priming] and memories associated with it and such.

Here's a post I wrote a few years back about this [it was anchored to a stealth focus group ad where consumers claimed taste preference for diamond shape shreddies, as opposed to square ones...]:

As Coca-Cola just found out.

And, in there, somewhere, is the magic bit of good branding.