What Do Advertising Agencies Do? 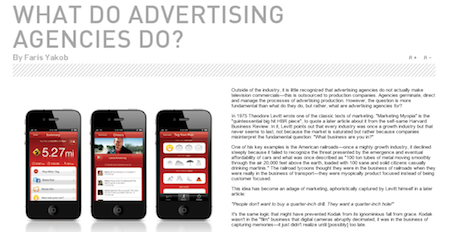 I wrote this Viewpoint thing for the current issue of the ONECLUB magazine.

You Download What Do Advertising Agencies Do? TIGS as a convenient portable document for Kindle viewing, perhaps.

Or read it here>

WHAT DO ADVERTISING AGENCIES DO?

Outside of the industry, it is little recognized that advertising agencies do not actually make television commercials—this is outsourced to production companies.

Agencies germinate, direct and manage the processes of advertising production.

However, the question is more fundamental than what do they do, but rather, what are advertising agencies for?

In 1975 Theodore Levitt wrote one of the classic texts of marketing. “Marketing Myopia” is the “quintessential big hit HBR piece”, to quote a later article about it from the self-same Harvard Business Review.

In it, Levitt points out that every industry was once a growth industry but that never seems to last, not because the market is saturated but rather because companies misinterpret the fundamental question:

“What business are you in?”

One of his key examples is the American railroads—once a mighty growth industry, it declined steeply because it failed to recognize the threat presented by the emergence and eventual affordability of cars and what was once described as:

“100 ton tubes of metal moving smoothly through the air 20,000 feet above the earth, loaded with 100 sane and solid citizens casuallydrinking martinis.”

This idea has become an adage of marketing, aphoristically captured by Levitt himself in a later article:

It’s the same logic that might have prevented Kodak from its ignominious fall from grace. Kodak wasn’t in the “film” business that digital cameras abruptly decimated, it was in the business of capturing memories—it just didn’t realize until [possibly] too late.

Advertising agencies “make” advertisements and this is a surprisingly healthy business considering how often its demise has been trumpeted.

Indeed, television advertising in the USA grew 9.7% in 2010 according to eMarketer, bouncing back after the recession, and growth is projected to continue.

Despite time-shifting ad-skipping digital video recorders, the death of the 30-second spot has been greatly exaggerated.

That said, it’s important to remember that advertising is a drill, not a hole.

Advertising is a means, not an end, a lever designed to effect consumer behavior leading people to pay price premiums and buy more things and more often, due to the dimly understood interactions of persuasive symbols and human cognitive, social and economic behavior.

Thus, should better, more efficient, more effective solutions to the business problem of marketing products to the masses manifest, companies would be well advised to pursue them.

Advertising agencies then, either make advertising, which is a service that can be displaced, or they help corporations solve business problems with creativity, which will remain an ongoing need as long as there are corporations, but puts “advertising” agencies into a much larger competitive set alongside other business consultants, albeit with a specific competitive advantage of being able to effectively house and manage commercially creative people. Large management consultancies struggle with this for the same reason - the environment isn't usually very palatable to them.

The industry is bifurcating along these lines.

It’s a good idea to work out which business you want to be in and act accordingly.

Pure play advertising agencies should defend and leverage their core competencies inside the extant market.

Agencies that want to explore the possibilities outside this definition of the category must be willing to invest in developing new competencies to service emerging needs, increasingly at the intersection of technology and storytelling.

This blurriness is perhaps best evidenced by The One Club awarding Nike+ as one of the Best Campaigns of the Digital Decade despite, or because of the fact that it isn’t a campaign.

A technology driven product/ service extension attracts and earns attention for a brand, solving a problem with something other than “advertising.”

Both strategic routes are sensible to consider, depending on an honest analysis of the business and its strengths and assets, including its key and often overlooked intangible asset, the agency brand.

The danger comes from attempting to be all things to all customers—the essence of strategy is trade-offs, since finite resource requires finite offerings.

Worse than not making decisions is falling symptom to the “Shirky Principle”—an idea established by Clay Shirky in his book, Cognitive Surplus, and elevated to the status of principle by Kevin Kelly, founding editor of Wired.

Shirky points out that

“Institutions will try to preserve the problem to which they are the solution.”

Rather than solving clients’ problems, agencies that succumb to the principle spend their energies trying to maintain that the world of business and media hasn’t changed, or attempting to stymie symptoms of the change when they encounter it.

As with any corporate strategy, the road ahead for advertising depends on knowing what business you are really in and acting accordingly.

Very useful little deck on free social listenting tools that some of my work family contributed to.

Leo Burnett "When to take my name off the door" from Lobo on Vimeo.

'When to take my name off the door'

You may want to call yourselves " Twain, Rogers, Sawyer and Finn, Inc."….. or "Ajax Advertising" or something.

That will certainly be OK with me – if it’s good for you.

But let me tell you when I might demand that you take my name off the door.

That will be the day when you spend more time trying to make money and less time making advertising – our kind of advertising.

When you forget that the sheer fun of ad making and the lift you get out of it – the creative climate of the place – should be as important as money to the very special breed of writers and artists and business professionals who compose this company of ours – and make it tick.

When you lose that restless feeling that nothing you do is ever quite good enough.

When you lose your itch to the job well for it’s sake – regardless of the client, or money, or the effort it takes.

When you lose your passion for thoroughness…you hatred of loose ends.

When you stop reaching the manner, the overtones, the marriage of words and pictures that produce the fresh, the memorable and the believable effect.

When you stop rededicating yourselves every day to the idea that better advertising is what the Leo Burnett Company is about.

When you are no longer what Thoreau called "a corporation with a conscience" – which means to me, a corporation of conscientious men and women.

When you begin to compromise your integrity – which has always been the heart’s blood – the very guts of this agency.

When you stoop to convenient expediency and rationalize yourselves into acts of opportunism – for the sake of a fast buck.

When you show the slightest sign of crudeness, inappropriateness or smart –aleckness – and you lose that subtle sense of the fitness of things.

When your main interest becomes a matter of size just to be big - rather that good, hard, wonderful work.

When your outlook narrows down to the number of windows – from zero to five – in the walls of your office.

When you lose your humility and become big-short wisenheimers…. a little bit too big for your boots.

When the apples come down to being just apples for eating (or for polishing) – no longer part of our tone or personality.

When you disprove of something, and start tearing the hell out of the man who did it rather than the work itself.

When you stop building on strong and vital ideas, and start a routine production line.

When you start believing that, in the interest of efficiency, a creative spirit and the urge to create can be delegated and administrated, and forget that they can only be nurtured, stimulated, and inspired.

When you start giving lip service to this being a "creative agency" and stop really being one.

Finally, when you lose your respect for the lonely man – the man at his typewriter or his drawing board or behind his camera or just scribbling notes with one of our big pencils – or working all night on a media plan. When you forget that the lonely man – and thank God for him – has made the agency we now have – possible. When you forget he’s the man who, because he is reaching harder, sometimes actually gets hold of for a moment - one of those hot, unreachable stars.

THAT, boys and girls, is when I shall insist you take my name off the door. And by golly, it will be taken off the door. Even if have to materialize long enough some night to rub it out myself - on every one of our floors. And before I DE-materialize again, I will paint out that star-reaching symbol too. And burn all the stationary. Perhaps tear up a few ads in passing.

And throw every god-damned apple down the elevator shafts.

You just won’t know the place, the next morning. You’ll have to find another name."