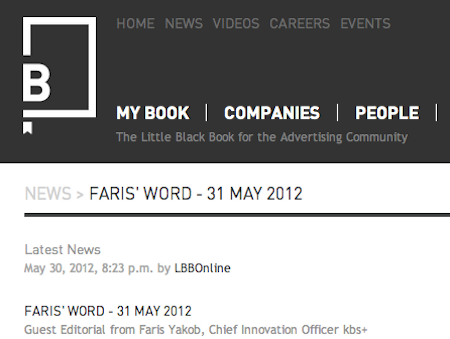 My lovely mate Gabby is the editor of Little Black Book. While she is on vacation she asked me to guest edit, so I got to write the editor's letter WORD thing.

Since I was ghostwriting, I thought I would write about content, which is an increasing part of what we do, since it's like ghostwriting for brands.

Read on the site.

[ps GhostWritten is a lovely book by David Mitchell]

Hello!  It’s Gabby!
Not really, It’s me, Faris.
I’m writing a guest editorial, which means I get to write Gabby’s Word for her.
It’s on odd feeling, writing as someone else. Trying on their voice, seeing if you can make them sing.
Ghostwriters have long made a living taking words from the famous and putting them to paper.
And, of course, advertising has long spoken for brands – in a very specific, mediated, context.
Now, the web allows for, and thus seems to insist on, direct, disintermediated connections with customers, prospects, fans and detractors. This, in turn, has created a far greater need for content, as distinct from advertising.
Content is something they want to hear; advertising is something we want to say.
The Cannes Lions Advertising Festival announced their newest category – Branded Content – for 2012, to reflect this rapidly growing sector of the industry. Various agencies [including the one I  work at kbs+] have created new content units, staffed with former editorial types from different parts of the media industry, to service these needs.
So lots of people suddenly find themselves ghostwriting for brands in a new way, in some ways as though the brands were people.
This is because on Facebook, and to some degree on the web in general, scale doesn’t necessarily provide significant advantages. A brand timeline is structurally the same as an individual one.
This provides obvious benchmarks, as brand content comingles with consumer created content, which flows at a very high frequency compared to advertising – Facebook indicates that the average user creates 90 pieces of content a month – and rarely repeats itself.
It’s a skill we are all learning, borrowing tools from the traditional publishing industry, and learning our own experiences as content creators, curators and propagators on the web.
It’s a huge challenge and opportunity for brands and their agents, as brands look to develop more depth and complexity to maintain an ongoing content stream, with immediate feedback as to what content resonates with a community, a chance to operate in near time.
The economics of content are inherently unpredictable – as screenwriter William Goldman famously said of Hollywood’s ability to predict blockbusters: Nobody Knows Anything.
Fortunately inside the stream we can experiment with much smaller fragments of content that require tiny individual investments, and keep learning as we go.
Previously, the ability to publish content, to make things public, was a privileged act. Only governments, the media-industrial complex, and advertisers could do it. Previous generations were defined in terms of the media the consumed – the MTV generation.
Now the people formerly called the audience are churning out content as a function of living, as communication, as a way of creating themselves. This generation is defined by the media it creates, by what content is shares, which provides an ongoing role for brands – people need things to talk about, to share, and that content will earn us a place in their streams, supplementing the positions we can buy.
If content was once king online, it is now a republic, and all content competes to attract attention, to advertise, in a live market that dynamically allocates attention to whatever it most interesting right now.
So we had better get good at ghostwriting.
Thanks for the practice, Gabby!

You should read it.

Some it flows nicely from some of the thinking in the post below about opening up user data to users to help users help you, marketing as enablement, not image, which was pleasing.

But is far more briliant. 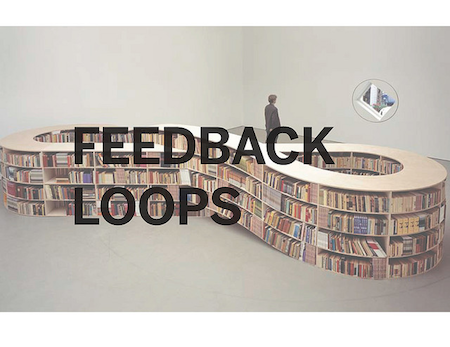 In the wake of the Nike Fuelband launching, it seemed a good time to publish this paper I wrote for Canvas8 in its entirety.

Precis [not part of original paper]

The Hawthorne Effect is a much quoted..effect...about observation changing behavior.

It comes from a productivity experiment run in 1920s at a factory called the Hawthorne Works, near Chicago.

They were trying to understand if environmental changes could enhance productivity - they changed the lighting levels up and down, moved workstations, moved obstables and so on - and found that productivity increased in ALL cases, but dropped again after the experiments ended.

This led them to the conclusion that it was the act of being observed that changed the behavior.

In research, there is also the well established 'demand effect' - where participants form an interpretation of the purpose of the experiement and then, unconsciously, change their behavior to suit that interpretation.

Another explanation is that they were getting direct feedback about productivity rates for the first time, and this feedback caused the increase, which then stopped when the feedback stopped.

[This is why it might be relevant to the paper below.]

Nothing about behavior is simple.

And, as Duncan Watts points out in the excellent Everything is Obvious (Once You Know the Answer), one of the challenges of social science is that different, even conflicting, explanations of human behavior, can often both seem to 'make sense', which makes common sense interpretations of behaviour useless in predicting it.

One of the things that seems to typify companies that 'get' the web intuitively is that they tend to expose their data about users back to users to help users.

Clay Shirky points this out.

Thanks to Foursquare stats, we now know more about our drinking habits that our work habits.

Kickstarter turns over its data to the users to help them use the platform better [the insight that projects that hit 30% usually get all the way home, so putting in more effort at the beginning is the way to go, is invaluable.]

Etsy does the same with its Seller Handbook.

Show us, help us, empower us, market with us and we will like you.

Target us, stalk us, hide from us, market at us and we won't.

Marshall McLuhan’s famous aphorism 'the medium is the message' highlights the communication effect of the medium itself, which our brains filter out, rendering the wrapper invisible.

McLuhan understood a medium to be an extension of the senses, but increasingly our location can be understood as a medium – a channel that can be used to communicate and contextualise.

But, while where you are is interesting, what you are near is crucial.

Accelerometers and GPS now come as standard inside many of those personal computers we call mobile phones. They are Bruce Sterling’s 'SPIMES' – objects that know where they are in SPace and tIME – wagged to life by the trail of digital fumes they create.

The 'digital exhaust' of our personal and collective lives, largely invisible through nascent stages of the web and mobile, is revealing itself to be more natural resource than pollution.

By leaving behind traces of the past, they offer clues to our future, especially in terms of spotting data patterns which can lead to accurate and useful predictions.

Everything creates data, and now we can give this airy nothing shapes and names.

Through applications built to harness the geographies of our lives, we can see ourselves through the prism of our social life (Foursquare), real or virtual spaces (voyurl), meals (FoodSpotting), drives (BMW’s EVolve) and emotions (Mappiness). The mainstream interest in this previously invisible undercurrent of data can be seen through the data visualisation explosion.

This has changed the narratives of journalism and is painting new pictures of our lives.

However, when we go beyond simply painting pretty pictures of our fumes, you begin to realise something musicians have always known – feedback creates loops.

Feedback loops are how we learn.(1)

We now mesh our personal exhaust with that which is aggregated from the world around us, allowing discovery of new and better ways to navigate our reality as we move through space and time. The Fitbit personal activity monitor and Nike+ both feed, and feed off, these fumes.

Our digital exhaust is not limited to how we can view our own individual worlds.

Human beings don’t scale in a linear fashion – a crowd does not behave like a lot of individuals, because the dynamic interactions between individuals create a system with emergent properties.

Now that three quarters of the world’s population has a mobile, we can begin to look at some of these emergent behaviours with a bird’s-eye view.

This view may provide a greater extension to our collective senses than anything McLuhan dreamt of.

“The patterns are allowing us to learn how to better manipulate trends, opinions and mass psychology.”(2)

Epidemics can be predicted, influence lines identified – all from looking at the patterns we are unconsciously creating.

Even in a world made smaller by the internet, things that are nearby tend to be more valuable, useful and more important to us.

E-commerce, important and convenient as it is, still only represents about 7% of total retail sales in the U.S.(3) – most buying is done the old-fashioned way, in shops.

That’s not to say the fingers of the digital age aren’t changing the dynamics of locality; 20% of all Google searches are local – that number doubles if you only look at searches from mobile devices.(4)

Examples of this in action include Stella Artois' Le Bar Guide, an iPhone application that uses GPS and augmented reality to help you find the nearest bars that serve their brew.

It will even help you call a nearby cab company when it’s closing time.

Uber also makes use of part of this idea: just request a cab and the nearest one is dispatched to you.

Neighborgoods.net lets you save money and resources by sharing your stuff with nearby friends.

Whipcar.com lets you utilise the untapped capacity of your car by renting it to people around you when you don't need it.

Proximity is a virtue for marketers because what’s around an individual can tell brands a lot about them. Experian has long traded in data that profiles consumers based on where they live.

A Harvard study analysed 50 years of lifestyle data to uncover the fact that things like obesity and happiness spread through association – so choose your friends and colleagues wisely.

Being a consumer of a particular brand is a kind of context, establishing as it does a symbiotic relationship between the individual and the organisation.

For the majority of marketing, it may be better not to think of customers as people;

Throughout the marketing process, we spend a lot of time trying to understand the kind of people who are most likely to buy, but behavioural economics and decision research all suggest that 'where', 'what' and 'when' are at least as important as 'who'.

The Social Currency application from American Express intended to do just that – using Foursquare's engine, it establishes location and intention by encouraging you to check in to retailers, and share what you bought and what you want with your social network.

So now we know where you are and what you want to buy – intention and location, very useful context to market to.

So we can look to market to contexts, instead of people, now that we have access to proximity and intention data that can suggest context.

For people, business and the behaviour that is customers, it’s not just where you're at that’s important, it’s what’s around you.