Here is the live version of the article below that I performed at Social Media Week NYC and the slides that accompanied the 15 minute talk.

Followed by the very excellent talks from my mate the very inspiring Shaun Abrahsom, whose book Crowdstorm just came out:

Crowdstorm: The Future of Innovation, Ideas, and Problem Solving

[treebook {a coinage of Shaun's}]

Crowdstorm: The Future of Innovation, Ideas, and Problem Solving

and the very nice John Bielenberg, founder of Future Partners, who I met on the day.

I normally don't recite speaches like this, but I tend to enjoy tangents when speaking, so with a 15min slot I thought I would try doing it a little differently... 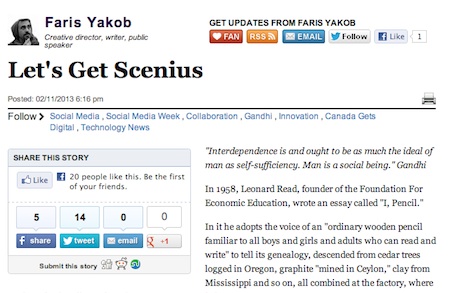 is the name of this piece I wrote about collaboration for Huffington Post, as part of Social Media Week.

And here it also is:

"Interdependence is and ought to be as much the ideal of man as self-sufficiency. Man is a social being." Gandhi

In 1958, Leonard Read, founder of the Foundation For Economic Education, wrote an essay called "I, Pencil."

In it he adopts the voice of an "ordinary wooden pencil familiar to all boys and girls and adults who can read and write" to tell its genealogy, descended from cedar trees logged in Oregon, graphite "mined in Ceylon," clay from Mississippi and so on, all combined at the factory, where workers drink coffee and machines use power and glue.

The point of this pencil, if you will, is to highlight the invisible hand of the market operating across the world and to point out that "not a single person on the face of this earth knows how to make [a pencil]."

That was the 1950s and the things we make have gotten exponentially more complicated since then. In response to this ever increasing level of complexity, the author Matt Ridley recently happened upon the same thought as Mr Read, pointing out at the Google Zeitgeist event that there is nobody on the planet who knows how to make a computer mouse, using much the same story as I, Pencil:

"The knowledge is not in any individual's head because the man who knows how to drill the oil well doesn't know how to refine it into plastic..." and so on. The modern world "achieves things that nobody knows how to do."

These parables are used to highlight how the market efficiently allocates resources without any central control, but they also show that all humanity's progress comes through specialization and exchange and that we can no longer be self-sufficient, at an individual level.

Western modernity has long espoused the myth of the atomized individual, achieving or failing through her own effort and merit. An aspect of this myth is the Great Man of History theory, where we focus on remarkable individuals as instruments of progress, often dubbed geniuses. If this were ever true, when lone individuals discovered new elements in home fashioned laboratories perhaps, it certainly isn't now. Yes there are exceptional people, but all the simple, one mind problems, have been solved. Now it takes teams of literally thousands at places like CERN to smash open more secrets of the universe.

Brian Eno coined the term "scenius" to express the genius of the collective. "Scenius stands for the intelligence and the intuition of a whole cultural scene. It is the communal form of the concept of the genius." Not simply the wisdom of a crowd, rather the collaboration of many individual minds, creating a larger distributed intelligence and a culture of creativity.

Several factors seem to precipitate this kind of culture, that occasionally has the emergent property of scenius. Mutual appreciation and respect, the rapid exchange of tools and techniques as they develop, network effects of success where credit is distributed to the community, and a tolerance for constant weirdness at the fringes of it. The open source movement has a whiff of scenius about it, as does Anonymous.

Increasingly, as Ridely point outs, thinkers become ever more specialized in every field and so we need people who can traverse different fields, or at least translate between them, to find the non-obvious combinations that are ideas and innovation.

Results from the Innocentive open innovation platform show again and again that when progress in a specific field stalls, it is often a thinker from one slightly adjacent, with a set of different mental models but still able to understand the problem at hand, that achieves a breakthrough. Translators and facilitators are crucial when different collaborators speak vastly different languages, of science, technology and human behavior.

No man is an island, entire of itself. It's this, rather than the specificity of government, that I choose to believe President Obama meant when he said:

If you were successful, somebody along the line gave you some help. There was a great teacher somewhere in your life. Somebody helped to create this unbelievable American system that we have that allowed you to thrive. Somebody invested in roads and bridges. If you've got a business, you didn't build that. Somebody else made that happen.

We face a world of exponentially increasing complexity, driven by Moore's Law, and rapidly escalating numbers of people with which to solve the problems we will face. Collaboration, scenius, is what will drive big new solutions. Practical ways to collaborate with large numbers of different ideas and people across massive distances is the challenge we face today. Not so much crowdsourcing as crowd creation.

Fortunately, Homo sapiens is uniquely suited to this challenge. Our ability to work together is why we are the most successful species in the history of the planet. Language and cooperation made us better hunters than anything red in tooth and claw and allowed us to build technology to shape our world around us.