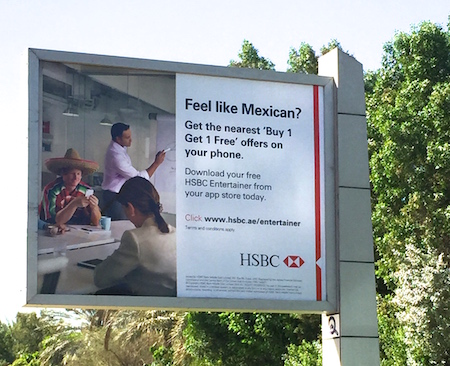 Lawmakers hammered the British-based bank over the scandal, demanding to know how and why its affiliates had exposed it to the proceeds of drug trafficking and terrorist financing in a "pervasively polluted" culture that persisted for years. "

HSBC has confirmed it is to pay US authorities $1.9bn (£1.2bn) in a settlement over money laundering, the largest paid in such a case.

A US Senate investigation said the UK-based bank had been a conduit for "drug kingpins and rogue nations".

LAST month, HSBC admitted in court pleadings that it had allowed big Mexican and Colombian drug cartels to launder at least $881 million.

The bank also admitted to using various schemes to move hundreds of millions of dollars to nations subject to trade sanctions, including Iran, Cuba and Sudan, in violation of the Trading With the Enemy Act.

“On at least one occasion,” according to a statement by Assistant Attorney General Lanny A. Breuer, “HSBC instructed a bank in Iran on how to format payment messages so that the transactions would not be blocked or rejected by the United States.” "

HSBC has admitted its laundering role, and evaded criminal prosecution by paying a fine of almost $2 billion.

The lack of imprisonment of any bankers involved is indicative of the hypocritical nature of the drug war; an individual selling a few grams of drugs can face decades in prison, while a group of people that tacitly allow -- and profit from -- the trade of tons, escape incarceration. " 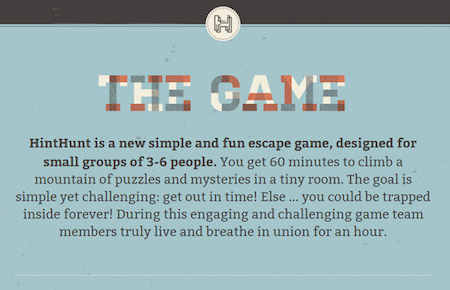 We were in Dubai with a client - the lovely Dubizzle - and they had put one lots of cool things for us to do. We wanted to take a couple out to in some small way return the favor, so we were looking for something non-obvious to do.

Sometimes, the non-obvious things to residents are quite obvious to toursits. In the sense that Dubai has some, many in fact, world's biggest things. Very famous things.

But the top rated attraction on TripAdvisor was something called Hint Hunt, which none of our clients had heard of.

So we took them there.

Earlier this year, I was giving a talk at Google about the INTERNET of THINGS [IOT]

It's not really an internet of things. It's a system for ubiquitous sensing and connectivity. Inside of which is people. The Internet of Behavior, perhaps.]

The brief was How do We Design For The Internet of Things. 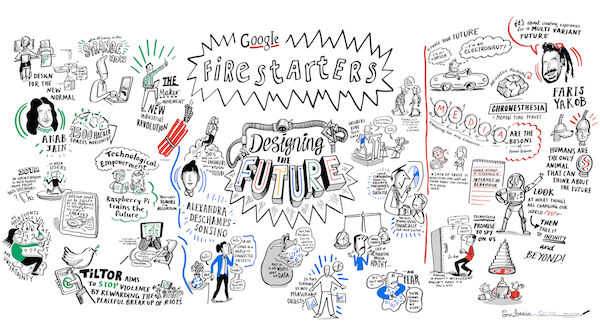 I'm not a designer, but I believe in stealing ideas, mapping them from different domains, remixing them, to find inspiration.

One of the inspiration pieces I used was the experience design of a real life escape the room game from Croatia I had read about.

Designing experiences where you consider every single element in a space, and how human beings behave in them, seems like a relevant reference for designing for the THINGERNET.

So does Monkey Island, the old computer game where you can click on anything to see what it does.

You need a few people to do it to make it fun. The first hint they give you is communicate everything.

I really can't tell you anything about it, it would spoil the fun.

There is one in London, Paris and Dubai - and other branded escape the room type experiences cropping up all over the world.

Grab some mates and go play.

The Day Before Tomorrow

The lovely Dave Birss, editor at large of THE DRUM and all round creative renaissance man, has made an excellent documentary series called The Day Before Tomorrow, about innovations happening as of right now in different categories.

It's great - released as a sequential batch in the way of modern things, each episode fitting nicely into a lunch hour.

[Please take a lunch hour. They won't thank you for not doing so. They just begin to expect it.

If you have to eat at your desk, watch this show. But, if you can, go out.]

He very kindly invites Genius Steals to take part, so Rosie and I are in different episodes, saying things.

The one above is the Smart Cities one, which features me saying a few things.

Advertising Arrives: The Spirit of Myanmar 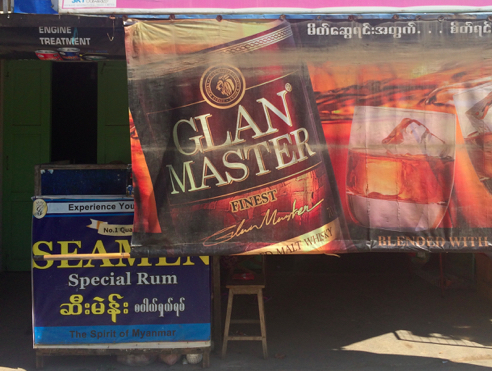 [Master of Glans, supported by Seamen]

You can't advertise alcohol except on premises - so all the premium liqour brands launched water variants with the same logo, which they can advertise.

The letter of the law of the spirits.

I realise this picture doesn't show that.

I tried to get one but they were mostly on buses and taxis and they came out blurry because moving. You'll just have to trust me on this.

I thought this picture was funny because I'm childish.

We had ten days in between the end of our honeymoon and our next gig in Dubai, so we went to Myanmar [formerly known as Burma].

Having been part of the colonial British Empire

It's weird being British when you travel around.

I feel the need to apologise for the empire, but they only reason they can understand me apolgising in English is because of the empire.

Obviously it was pretty insanely terrible, taking over most of the world using flags and violence, but the by-product of a global lingua franca is pretty cool.]

[George Orwell was stationed out here for a few years, which is where his hatred of the oppression of the empire really fomented]

it regained independence, had a brief flirtation with democracy and then succumbed to a military junta and closed its borders to the outside world.

Over the years there had been a lot of protests about this, especially from students. The junta responded to this by moving the universities out of the city into the distant suburbs so the protests wouldn’t block traffic.

An aspect of this isolationism was an absence of advertising - the only visible brand back then was Fuji, which built the elevators and other infrastructure. There were very few cars allowed in and those were subject to huge taxes putting them beyond the reach of the vast majority.

[For a look at what a country without advertising looks like you can check this old post on Cuba.]

Then in 2011, the junta essentially moved themselves out of power and opened the borders - and in rushed capitalism.

A brand grab is underway, and you can see advertising evolving across the country, from Yangon out.

[Colonially called Rangoon, and still known as that to some older Myanmar, since it was changed by the junta, and some people didn’t recognise their right to change it. Even though it was, at least supposedly, a British transliteration of a certain dialect’s pronunciation of Yangon.]

[Yangon, wonderfully, is made up of two local words, meaning “enemies” and “rush out of”.]

Anyway, on to the ads.

There are two ad agencies in Myanmar, and WPP recently bought them both.

It’s fair to say they don’t have much muscle memory since the industry is 3 years old here.

ATMs only arrived in January 2013. Credit cards about the same time. The internet falls over all the time and when it does so do the ATMs.

Locals have lived their whole lives in a cash only society and so have no interest in, time for or understanding of banks. We spoke to a marketer for a global brand who was positioned here. She told us that, because global, they insisted on paying local staff by check, because systems.

This greatly confused and annoyed the locals, who now had to spend a whole day in the bank every month getting the check turned into money.

So they are trying to win trust, explain that banks are good for everyone. 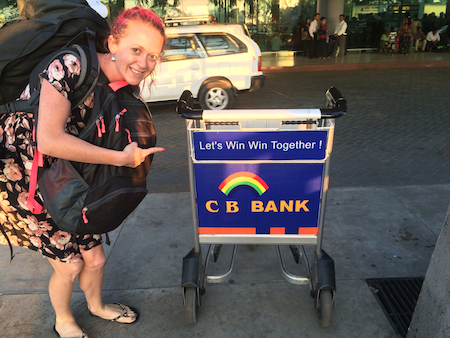 Coca-Cola is probably the most visible brand here already. It welcomes you to the country, just past immigration. 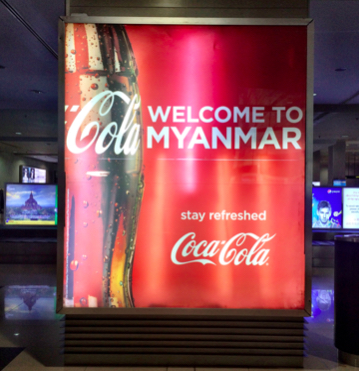 [Also, on the immigration desks, they have Samsung viral flu destroying devices [which, if they work, why don’t we have them?], on a branded standee, but you can’t take pictures there].

[UPDATE! My intrepid and very
dear friend Jason risked irking the customs people and got this photo. So - again - if these things work why don't we have them in Murica?] 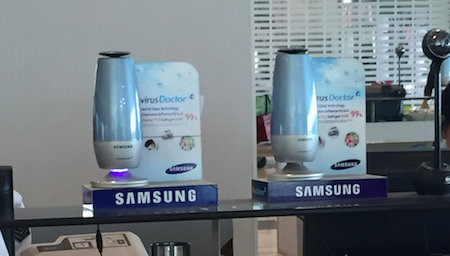 You can see that Coke is using a refreshment proposition, rather than the higher order value prop of Open Happiness.

There are also these Coke billboards that seem to suggest that between 12 and 4 could be good time to get refreshed. Or that you can only drink Coke during these hours by government edict. Or something. 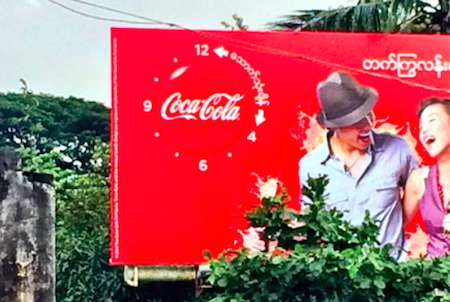 This is a fragment of an ad for a telecoms company. Annoyingly, I seemed to get the picture of the person without yellow circles on her cheeks.

The Myanmar people often wear a yellow pulp made from tree bark as a natural sun screen - it has now taken on cosmetic qualities also. As in many parts of Asia, where dark skin is naturally occurring, they would rather have lighter skin, so wrap and use parasols.

I find this unpleasant, but I guess it’s not any different to self tanner.

If people were just happy with the way they were it would be hard to sell them beauty products.] 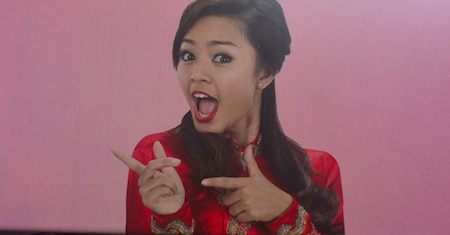 You can see they have picked up the open mouth smile thing, and finger guns.

Branded goods from global giants compete with local variants on the shelf.

They’ve really leaned into the “once you pop you can’t stop” proposition with KRACKS. Or possibly the crunch. 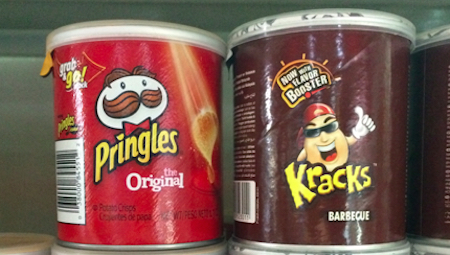 Myanmar is a massive country of about 55 million people, representing a brand new brand market for global brands and agencies, an obvious growth opportunity.

Because it is so big, and because the roads were not built for the amount of cars now here, there are a surprisingly large number of local airlines, which, when looked at together, show varying stages of propositional evolution, from hygiene claims, through quality, appeals to providence, service, more than plus up, all the way to more aspirational, abstract promises. 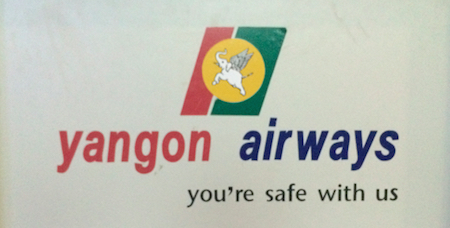 And finally, the epic impossible promise: 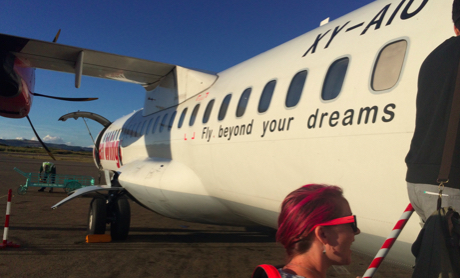 A line I couldn't get out of my head, because my brain created a jingle for it, compulsively, that we perform here.

Advertising is a symbol of the age we live in, it speaks to a shrinking world and is all about how we can stand out.

Myanmar is absorbing the world fast. 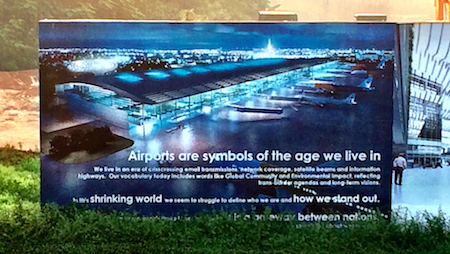