The Axes of Attention 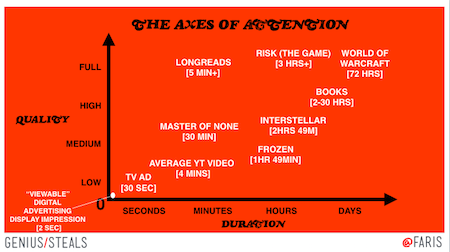 Earlier this month I did a webinar for the lovely people at the World Advertising Research Council about attention, rounding out a half year of touring my book Paid Attention, which has seen the talk I give evolve considerably, as the conversations have evolved around attention and ad blocking.

You can watch it on the site [it says it's a download but it's not, it goes through to a streaming screen] and I thought I'd pull out one new element I've been thinking about: the axes of attention.

In my book I suggest attention is a resource, and it is traded through what is a kind of derivative or proxy or possibility point called the impression. Since impressions are binary, on or off, they make us think of attention that way, even though we know it isn't.

"Humans have shorter attention span than goldfish, thanks to smartphones"

and got a lot of press because it feels like something that is true, that our spans of attention have decreased, that it's harder to focus, because Internet.

However, this sort of research is somewhat spurious because there is no agreed definition of "attention spans" and because Microsoft created it to sell certain kinds of advertising units - short ones, one assume.

[Always look to the source of an article or research, because all content is advertising something.]

Here is the primary research so you can look at it - it has lots of interesting depth to it, but we always look for the super simple "insight" even in areas that are amazing complex, like cognitive research. We are biased towards simplicity because we only ever encounter complexity in the real world.

Hence, stories and myth and how memory works and the oft spouted belief in simplicity, which often masks or distorts instead of reflecting reality.

Anyway, the major point, made by Microsoft CEO is one I, obviously agree with, hence my book:

So we live in a world with many more options and distractions, and so we can't focus as much, because they are always alternatives.

Every tiny bit of our attention takes something from us, and we have a limited about of time and cognitive resources each day.

We trade our attention for content - that's how advertising mostly works -

except for with billboards, which is why David Ogilvy hated them, because there is on consent, no value transferred to the individual. 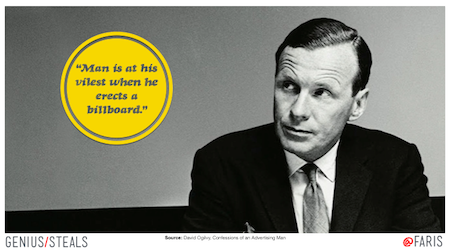 and because attention is much more limited than content now, the price should go up. But the market has incorrectly priced attention because impressions are not quite the same thing.

So you can understand ad blocking, or TIVO, as the market trying to correct the price of attention.

The attention cost in advertising of an episode of television on broadcast channels feels too high - too many breaks, too many ads, too high a frequency. Hence the practice of recording shows you watch live [one the rare occasions on you do] and starting 2o minutes later to skip past the breaks.

Adblocking is the same - the price we started to have to pay in attention terms for the content no longer felt right, the price was too high.

And, like in the tragedy of the commons, when too many bites of the pie are taken, the resource collapses. They take away our access to their attention, as also happened with billboards in Sao Paulo and Chenai. They became too numerous, too intrusive, and then they were banned. Attention collapse can happen.

That said, somethings are very good at holding our attention.

To give the most extreme example, a man in Taiwan died this year after a 3 day gaming binge. Video games are extremely good at holding attention for very long periods. I don't think World of Warcraft players spending hours or days playing feel like they have short attention spans in that moment.

So, a more varied understanding of attention is needed. It has 2 axes, not just one: duration and intensity, as in the chart at the top.

Paul Feldwick reviewed my book [which is awesome and I'm super grateful about] and pointed out that:

"So – to take a significant example – although there’s a great deal about the importance of ‘low-attention  processing’ and frequent acknowledgement  that advertising works in complex ways, the theme of ‘attention’ as flagged in the title keeps popping up without qualification as if it were always essential."

And I'd argue that it is, in the sense of duration.

Advertising can work with "low attention" - low intensity - as Professor Heath has well established. But it cannot function with no duration at all, that's just logic, simply because it means you never saw it, at all, anywhere, even in your peripheral vision.

Here we get into a tricky area because "conscious attention" and perception aren't the same thing exactly, inattentional blindness exists for example, which means we may not see things we aren't paying attention to even if we look at them, on the one hand, and you may never pay much conscious attention to a poster or TV spot as you see them.

So, for posters, low attention processing may happen well below your conscious threshold, but that can't function when you have adblockers online, because the ads never get in front of any sensory organs.

All of which is perhaps to say that communications need an attention strategy, to understand the attentional quality it is attempting to use in context, to appropriately value the attention is consumes from people, to balance out the attention debts people are feeling, to restore balance to the force.

[Go watch the webinar over at WARC, which features attention hacks and various other nuggets of stolen genius]

So, that wraps my year of thinking about attention with a rare but fun rant, to quote Tim Minchin.

I'm going to triple post this to Medium and Linkedin as a little experiment.

We are going offline for a bit to think about something new. 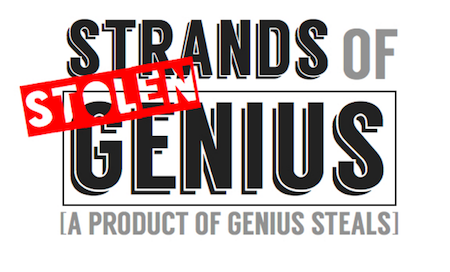 This is a special edition of Ex Libris since it mostly features books we love from friends of ours.

[Previous editions featuring lots of books I think you should read are here, here and here]

They were all featured in our newsletter this week - and if you subscribe THIS WEEK you will be entered to win either one of the books or ALL of them.

Strands of [stolen] Genius features a broad curation of the most interesting things we've consumed from the web this week, from articles, to research, ideas - anything that we think you should add to the lego box in your head from which ideas are made.

The box below should subscribe you - for more go to geniussteals.co/subscribe/

1. The Advertising Effect: How To Change Behavior
Adam Ferrier / @adamferrier

Too often we forget that changing behavior is why advertising exists, and that the assumptions we have, such as the idea that changing minds will change behavior, aren't necessarily true. Adam is a Naked alum, Chief Strategy Officer at new model agency Cummins&Partners, TV and radio pundit, dear friend and super smart individual. You'll likely find yourself re-reading and referencing his book at the start of many new projects.

Heather is a great friend to us [she was with us in the mountains this weekend!] and the strategy community: She's been writing, running and publishing the Planner / Strategist Survey for a decade. After a successful agency career, she decided to apprentice herself to some of the top strategy minds all over the world and detailed her journey in this book. She writes not only about what she learns, but the strategists and planners she meets along the way.

3. A Beautiful Constraint: How To Transform Your Limitations Into Advantages, and Why It's Everyone's Business
Adam Morgan & Mark Barden / @eatbigfish & @markcbarden

Adam Morgan wrote Eating the Big Fish and taught a generation of marketers about challenger brands. In his new book, he and Mark Barden explore an essential aspect of creativity - how it works with constraints, and how constraints can even enhance the response. It's as beautiful as it is practical, filled with interesting anecdotes and solid advice.

Mark's hugely important Herd paper and book reminded us all that humans are social animals and often make decisions socially. His new book is very aligned to the GeniusSteals philosophy and creative process, and it's illustrated by another dear friend of ours John Willshire. Alongside the theory of looking to others for ideas, the book has a resource workshop section you will most definitely return to.

David is a former religious scholar, technology entrepreneur and writes eloquently about the intersection of culture, technology, ancient wisdom and innovation [His previous book was Red Bull to Buddha: Innovation and the Search for Wisdom]. In this book he interviewed Seth Godin, Brian Solis, Chris Anderson, Jeremiah Owyang, Robert Scoble, Erik Qualman [and us] to uncover the modern rules of innovation.

6. Read This Before Our Next Meeting
Al Pittampalli / @Pittampalli

Rosie has sent this book to clients and partners because it seems that everyone is suffering from horrible meetings. With no objective, no thought, it should be no surprise that many meetings are ineffective. Al's book is a quick read (about an hour) and includes some easy actions you can take to quickly improve meetings. Plus, you can discreetly leave it on your colleague's desk when you finish ;) And if you loved what you read, you can look forward to his next book, which is coming out early 2016!

7. Paid Attention
Our very own Faris

When we asked the Global Marketing Director at Converse what she thought of Paid Attention, she said,

"We don’t think of it this way, but advertising is an industry with a history of its own, shaped by heroes, epiphanies, disasters and luck. It’s not often analysed like other industries, but in his book, Faris has laid out a rich and intricate landscape that not only frames the state of advertising today, but the events that contributed to it, and how advertising should evolve in the face of that fast-arriving future we’ve heard so much about. Grab a thesaurus and get ready for a Billy Madison-esque learning montage."

Haven't snagged a copy just yet? Our publisher, Kogan Page, is offering 25% off their entire catalogue with this code: KPXMAS2015

BONUS! We've done a lot of reading this year, and decided we'd each share one of our favorites with you!

What appears, on the surface, to be a biography of a briefly famous dance music band who went on to film themselves burning one million pounds on an island, is rather a a philosophical exploration into the strands of magic running through human existence and the twentieth century. Thanks to Saul Pee for the tip.

You've got "a young freegan couple living off the grid in New York City; a once-prominent linguist, sacked at midlife by the dissolution of his marriage and his father’s losing battle with Alzheimer’s; and a self-made debt-collecting magnate, whose brute talent for squeezing money out of unlikely places has yielded him a royal existence, trophy wife included." And the stories of their overlapping lives. An unlikely combination of thought-provoking, devastating, and funny makes for a perfect page-turner.