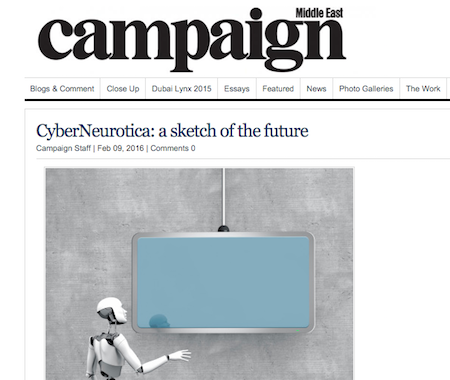 Campaign asked me to write a piece about the future for a technology supplement.

Cybernetics: the science of communications and automatic control systems in both machines and living things’. Faris Yakob imagines a world where science and technology live within you

You wake up with that bleary post-drinking feeling that used to be called a hangover. The Tylenol nanobots from the transdermal patch you applied before going out have already broken down the alcohol in your blood into harmless metabolites, sparing your precious liver cells, but you are still incredibly thirsty.

You reach out and grab the drinking flask off the urine recycler attached to your bed. Pure water is obviously far too expensive to drink. After the global droughts stubbornly refused to be a cyclical thing, it became more of a luxury than the previously most expensive fluid in the world – printer ink.

You lie there, enjoying the silence of your own mind for a second, before grudgingly turning on your implants with a flicker of thought, bracing yourself for the rush. Instantly, various communiques are installed into your operating memory, and you begin to filter them by urgency and importance, just as you were taught during recompression, after you were plugged in.

You still owe money on your student debts, of course, as you always will, and their bots are especially persistent, finding you no matter how many cognitive addresses you abandon. Waking up turns off their app which uses your implants while you sleep as part of a distributed super-computer, making tiny amounts of money to help pay off the compound interest.

Three splinter versions of your consciousness that had been working while you slept re-integrate with your waking mind, updating you on your progress. Things are going well. You are involved in a number of projects with subsidiaries of both the Apple and Samsung empires. There are no conflicts of interest of course, the Chinese Walls inside your mind are secured by unbreakable encryption. You’re working on some fun stuff, new flavour concepts hybridised from Monsanto-owned genes and crowdsourced dreams, some new elements for the ‘Love Immersion’ that is so popular in Apple now.

Here in the unaffiliated interzone, no empire is recognised. Early experiments in nanotech by Rosneft using pirated IP were unfortunately too ambitious. They lost control and grey goo’d most of Eurasia, rendering it uninhabitable. Applemerica and Samsungea were forced, despite decades of enmity, to collaborate on containment, and the surrounding fragments of liveable land became interzone between the empires. No protection here, but a lot less snooping too, which appeals to the nomad class of emogineers you are part of.

Creativity is a combinatorial process, well suited to software that can create billions of combinations and prototype them in the blink of a human eye. But understanding how these combinations, these ideas, will impact humans emotionally is still impossible for the AIs.

The intelligence of software turned out to be nothing like human intelligence, which operates as the slave to lots of messy heuristics called emotions. They are what makes life feel like it has meaning, but the bots find them annoyingly non-obvious. The miracle of subjectivity remains beyond the understanding of intellect. Bots have super intelligence – they learn, performing YottaFLOPS [or one septillion floating point operations per second], seeing all scenarios – but ask them if a joke is funny and they stutter. ‘Does not compute’. “Super smart has always been kind of stupid,” you smile to yourself, grateful that the world still runs on money and that emotions are the engine of commerce.

You get up and access your advertising algos. As the implants came online, as with the emergence of any cultural space, spam became an immediate problem, but now it was forcing itself into your brain. Ad-blockers were developed in the same old advertising arms race, but the immersive navigators and productivity apps and dating environments were expensive.

A truce was developed in the Alter Ego Algo. It dynamically trades your attention with advertising algos, based on your needs, preferences and schedule. “No one knows you better than your Alter Ego!”, as the slogan goes. Slogans are remarkably sticky, outliving the concept of narrative film advertising, for obvious reasons when you think about it. We don’t only think in words but we mostly do. We live in language. Originally the implants tried to move past language but it fried a few heads. Post language humans, it turns out, are no longer really human.

“Clothes,” you think, and a wave of Under Armour nanobots rapidly stitch themselves into a self-cleaning anti-microbial mesh around your genitals, decompiling dead skin cells to use as material. NanoVans build archaic shoes around your feet, the design a protean shimmer of colour and shape, occasionally recognisable as superheroes from your youth.

You activate your Burberry matrix, which flows around you, a skin adapting to the environment, constantly updating its blacklist of new viruses to block, and check the locality for Uber-loop pods. Maglev flight is slightly more expensive, but so much faster, and the pods have network proprioception so there’s never any traffic. You have a lot to do today. No matter how fast technology gets, you think, we always seem to find ways to be busy.

[With apologies to all the science fiction writers I have no doubt unknowingly stolen from to create this, and in honour of Marvin Minsky, the AI pioneer, who died last month]