Public speaking for agencies, conferences, corporate events (and all sorts of things where the organizer would like their audience not to be bored) is not just a significant part of our business, but one of our favorite types of work at Genius Steals.

We've even appeared in a few television programs, such as BBC Modern Masters [about Warhol and branding] and The Day Before Tomorrow [lots of topics about the near future], and one theatrically released documentary: The Greatest Movie Ever Sold [which we also consulted on].

When it comes to life, but especially moments of life when we find ourselves standing on stage in front of others, we ascribe to Kurt Vonnegut's point of view:

Use the time of a total stranger in such a way that he or she will not feel the time was wasted. - Kurt Vonnegut 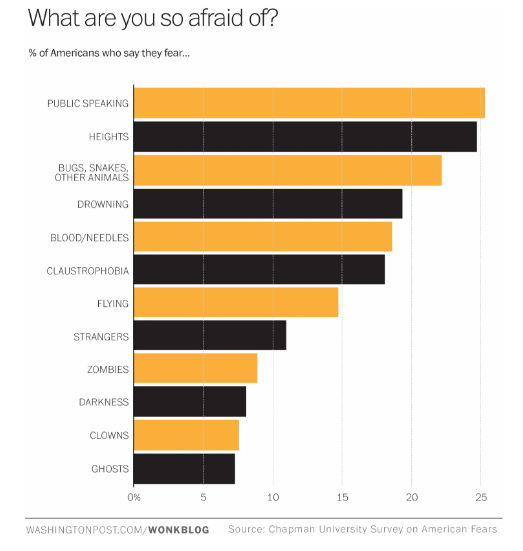 It is the number one fear Americans have is public speaking, above heights, zombies, clowns and death.

Since we're super-social and rely on groups to be useful for hunting and surviving and that, social fears about inclusion overweight more random dangers. Embarrassment could be highly adaptive if it prevented your ancestors being rejected from the group for long enough for them to procreate.

We love speaking and we love traveling [since we live on the road] so it's a perfect fit for us.

We believe it's our job to ensure the audience isn't bored if we are on stage. We speak on topics like brands, media, ideas, creativity, communication, technology, culture, content and the various interesting intersections thereof.

And, of course, we talk about my book Paid Attention and any of the manifold topics therein, as well as on Digital State and What is a 21 Century Brand? related topics, which I co-authored.

If you'd like testimonials or referrals, we'd be happy to connect you with past clients, who are kind enough to say things like:

"Having a conference? Skip the pens & hire Genius Steals. It will be your smartest investment." - Marketing Manager, Microsoft

Get in touch here if you're looking for a speaker at your next event!