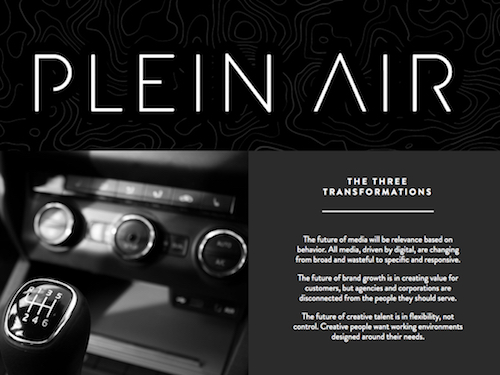 Back in the mid 2000s a lot of planners starting blogging and meeting each other online, mostly inspired by Russell Davies' pioneering blog. It was an exciting time, as the community found itself, started talking, trying to imagine a future, grabbgin drinks with people all over the world, just because of blogs and that.

The word blogosphere was salient at the time, and the planning subsection got called the Plannersphere, which also became this nice resource of planning tools and links.

There was even a heated debate as to whether blogging was somehow "killing planning".

Open Strategy is the excellent spiritual successor, an updated resource of strategy tools and resources, reflective of the planning>strategy evolution of the last ten years, which we talk about in the podcast below. I don't think blogging was killing planning, by any means, the idea is obviously fatuous, as many "death of" stories tend to be, but planning and strategy-inside-agencies has definitely changed in the last ten years.

One of the people I met during that time was the lovely Paul McEnany, who is now the CEO of a new model agency Plein Air.

He interviewed me for the finale of their new podcast series Real Famous.

All [career] advice is autobiography, to some degree. When people give it they are really just explaining their own choices and how they turned out, which are highly contextual and perhaps not that useful for other people, except at the very highest level, where they are inherently generic.

That said, people like hearing the stories of people's lives and choices, for the same reason people like stories in general, as highly simplified models of choices, causes and effects in the complex world.

We get from the past to the present, how we are working with clients, some of the broad set of things we've been doing, some new thoughts on 'peak attention' and why your career is like your health.