We Live in Public or The Mediation Generation

Last night I went to see We Live In Public, a film about the 'most important internet pioneer you've never heard of'.

It was brilliant and disturbing [don't take my word for it - it won the Grand Jury Prize at Sundance and everything.]

It's about a dude called Josh Harris [who I had never heard of, which annoyed me. As a geek I figured I would have heard of him - but I hadn't. He set up Jupiter Research, which I used to use a lot as a management consultant during dot com 1.0.] who fashioned himself as a interwebs visionary and, later, artist.

Using the money [$80 million] from Jupiter's IPO he began to champion a new kind of media culture.

Firstly he set up Pseudo - a web based television network, in the days of dial up - then later he built a bunker-like hotel commune thing called Quiet where people where filmed 24 hours day, in every room and activity, and populated it with various art installations and some very strange people [think proto Big Brother via a psychedelic lens].

After that he and his girlfriend wired their apartment with sensor enabled motorized cameras that filmed their every move and streamed it on weliveinpublic.com

What he was trying to experiment with, portray, pioneer, sell, whatever was his vision of how the web would change the world, which was that everyone would be watching everyone else, all the time. [Polypanopticon?]

And, as the film points out, then facebook and lifecasting and that came along and became ubiquitous it turned out he was pretty much right.

[It doesn't mention Big Brother, except in the older Orwelian sense, but it seems a like a direct steal from Quiet, the bunker experiment. They even have an interview room.]

Virginia Woolf once said nothing is real until it is recorded. It seems like the rest of the world has caught up with her thought. We endlessly refract ourselves, mediate our lives, to reach out and connect and then, begin to construct ourselves, in response to what seems to drive attention our way.

Online everyone is famous, but some are more famous than others - and it's really easy to tell who, because everything is enumerated.

As people we have always thought socially - seeing ourselves through the eyes of others. Increasingly it seems that without mediation, nothing seems real.

Next time you are at a concert - look at all the people capturing the moment, to mediate and broadcast it, to remember it and share it, to continue create themselves with it - even firsthand experiences require mediation.

Baudrillard suggested that endless mechanical reproductions of everything make it impossible to tell fantasy from reality - the copies become reality. He called this hyperreality - a kind of reality by proxy - and he said that we had already created a world of simulated stimuli.

This is also explored [in a different way] in Charlie Kauffman's Synecdoche New York, [that I watched on Sunday] where the director creates and re-creates his own reality in an attempt to understand it and himself.

[I didn't really love the movie but that doesn't mean I can't dig on the idea.]

No doubt this is about awareness and balance - but culturally, rather than individually, we seem to be hurtling into hyper[linked]reality.

At the end of the screening Josh was there to chat and take questions, at the end of which someone claiming to be a fan attacked him on stage, claiming he had a responsibility to those that watched him and that he was a 'fucking meglomaniaic'.

This itself was probably staged [or maybe not - it's hard to tell nowadays, apparently].

Perhaps only in our media reflections do we get to see ourselves as we want to be, or perhaps as we want others to see us, which, as in both movies, will probably have some very odd effects on our sense of identity at some point - the attention becomes both addictive and a burden.

If you tweet without any followers - does it make a sound? 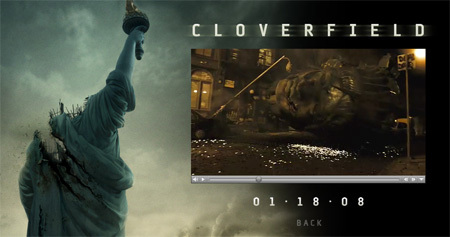 Kaz over in Japan sent me this 80's Walkman ad that was huge over there.

There's just something endearing about animals listening to music.

Maybe one day we'll get to see the otters dancing to Daft Punk that Contagious are hungry for.