Watchmen is one of the greatest books ever and I'm very excited about the upcoming film - especially as bits of the Watchmen world are already leaking into ours, building the world around the central narrative of the film in glimpsed media fragments.

Myth of the Near Future

[Hello Readers of Strategy Magazine! If you found this post from the article - welcome!]

A while back I made this film to describe how I saw the world of brands, media, communication, technology and that in 2010.

[I didn't actually make it. I wrote a script and then said what I wanted in it and how I wanted it to look. Then a nice production company made it.]

It pulls together a lot of things that tend to pop up on TIGS, envisaging an always on, hyperconnected world, divided between the participatory and the passive, with brands seeking new ways to communicate, new roles and new kinds of relationships.

Part of the conceit of the film is derived from my thesis, in the sense of that now worn-out phrase of Wlliam Gibson's: The future is already here, it's just not evenly distributed.

Almost everything in the film is already happening among small pockets of [mostly] younger people - it just sounds like science fiction.

The future is now. Or at least very soon.

Choose your own Advertising

Mother have been building a tall transmedia tale for Oasis: the forbidden love between Cactus Kid and his girl.

The core narrative runs across a sequence of TV spots, and extends outwards in a sighting page on Flickr, an organisation of Mothers [wink wink] up in arms about it, a film trailer, a Myspace profile and a competition to find the kid on Google Maps.

To bring the saga to a close, they are letting you decide what happens to the runaway couple and their newborn spikey baby by voting on the website.

You realise this is an Oasis ad, right?

Go and excercise your right to dictate the fate of the Cactus Kid - you can catch up on the story so far on the site. A while back I was going to write a post: the top ten reasons bloggers love lists, but a bunch of people have already done that.

It's almost certainly something to do with the promise of structure and informational density and that.


Julian has put together a Top 12 Historical Social Media Moments in Marketing and he has very kindly included the transmedia planning post I wrote [stealing heavily from Henry Jenkins] and its subsequent spread across the Internet and beyond at number 7.

The Age of Conversation comes in at number 11 - the sequel to which comes out soon [the list is actually a chronology not a ranking]. 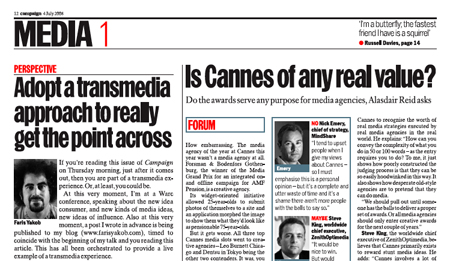 This is the paper part of the transmedia presentation - it was published in Campaign the day of the conference.

Some people found the presentation via the piece, and vice versa. The live part was tailored for the INFLUENCE theme. I'll see if that feels like a good thing to post later.

I talk about the nature of the experiment and then finish off by pointing out that major advertisers are actively following the model Jenkins established and I stole:

When I first started talking about this, people would question whether it would work for all brands. It requires a lot from people – it attempts to distribute identity and knowledge, to drive the formation of brand communities who piece the brand back together, together. Fine if you’re Nike  - but how would this work for fast moving consumer goods?

A non-linear brand world, accessed via multiple accretive touchpoints: adverts, building towards a feature length film, an online virtual world, and from here comics, games, mobile applications and so on.

[Again you might need to change the file extension to .pdf]

And learn more about the Coca Cola transmedia vision here - it includes a virtual world of the Happiness Factory created by Starlight Runner.

| View | Upload your own

This is kind of an experiment in distributed presentations.

This deck forms one part of a transmedia presentation [which is, itself, in part, about transmedia planning] - the one I'm giving about now at the WARC Influence conference in London.

One part is the presentation I'm giving live now - it builds on the same foundations as this, but has a different ending, talking more explicitly about INFLUENCE. [I'll post about that later.]

Another part is an article that is in this week's issue of Campaign - it also comes out on Thursday, at about the same time this post will be published, while I'm presenting - which explains the idea and expands on it a bit, with reference to a more recent example.

And this deck is the backbone - it's the alternate ending to the live version.

[It mostly contains ideas that I wrote about in my thesis - so you can read the long hand version here.]

All the elements are different access points into the ideas, and they are all connected, they have different things in them, they let you come to the larger discussion in whatever you want.

I'm not sure if this will work, but I'm hoping it will, at least, be interesting. 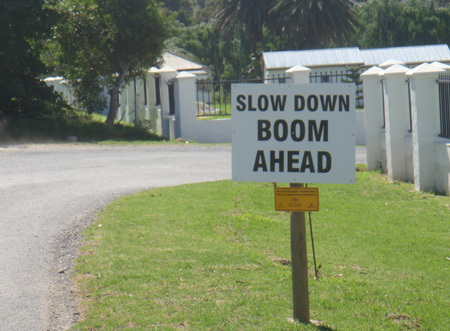 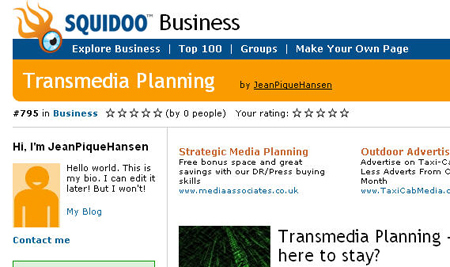 A chap called Jean has set up a Squidoo Lens on Transmedia Planning and that, collating the pertinent posts from the plannersphere and sundry other links.

The PS3 launch campaign has broken and it has the hallmarks of a transmedia narrative in the offing.

This place holder site gives nothing away but asks you sign up for updates, insisting on another layer of involvement and permission, the first of which I received today and you can see here.

The email introduces you to Bubba, who appears to be our guide. You can watch him dance here and this guy is another character. Apart from that nothing else is very clear - the narrative looks to be gearing up to begin in earnest and has the look and feel of Wild Palms, which is remarkably appropriate.

PS3 is a perfect client to put transmedia planning ideas into action for. Its audience is exactly the type of active media consumer that wants to get involved with with complex ideas and meshed media narratives: a generation brought up on gaming that wants worlds to explore,  challenges to be rewarded by and an intrinsically participatory relationship with ideas.

As the Passive Massive slowly cease to be the mass and the youth of today become the mainstream of tomorrow, these sort of ideas will become dominant vehicles for brand communication. My mate Rachel found Lost and sent it my way. Lost.eu wants to sign up 7 million players to become the "largest online game ever" and it all started with a URL left on a napkin in a cafe in Oxford.

It works like a kind of social pyramid scheme - you find an invite and then join the game. Once you join you then invite people yourself - the more people that join via your invitation - a unique URL - the more points you get.

It's an interesting experiment - challenging individuals to find ways to actively spread the idea, which has led to urls being scrawled in the sand on beaches in Puerto Rico, written on balloons released over Chicago and slightly disturbing pictures like the one above.

It taps into the transmedia strand we're calling propagation planning - creating ideas that contain their own mechanism for peer to peer transmission. Its creator says  "it is not about content but about spreading an idea" which, when married to Heath's new thinking on the impact of message content being negligible, begins to suggest how brand communication might successfully utilise the power of peer transmission.

As Jenkins has pointed out, you don't need to control the conversation to reap the benefits of the exposure.

I've signed up so if you want to have a look feel free to use this invite: www.lost.eu/31e12

If I get loads of points and win the grand prize of $5000 I'll buy the drinks at BeerSphere until the money runs out.